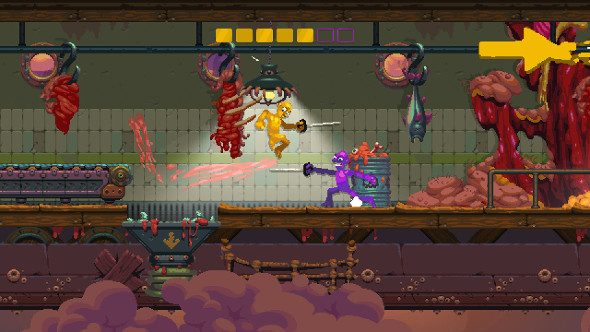 Nidhogg is a game of crazy and tense duels between two people usually screaming at a screen. It’s one of my all-time favourite local multiplayer games. Now it’s getting a sequel and it looks pretty different. The footage above is from the PS4 version, but it’s also coming to PC.

While you’re here, check out the best indie games on PC.

The most obvious difference is that the minimalist aesthetic is completely gone, replaced with very animated levels, and absolutely hideous character models. The backgrounds look great, but it’s going to take some time for me to get used to the mutant duelists. Most of the wackiness in the original came from players doing stupid things, but this time it seems to be expressed in the art as well.

New weapons have been thrown into the mix, too. What you can pick when starting a game depends on the level in question, but might include bows and daggers, as well as swords.

I think I’m going to miss the elegant simplicity of the first game but Nidhogg 2 still looks like a great deal of swashbuckling fun.