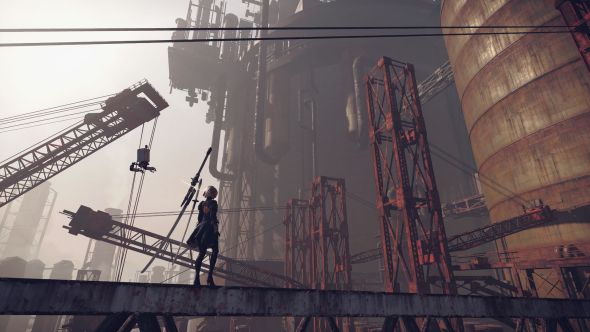 In one of a few announcements made by Square Enix in a weekend livestream, Nier: Automata will have a Dark Souls-style ‘android’ mechanic and DLC. The new Nier game will be streamed again on February 23, which is its PlayStation 4 release date in Japan. Fingers crossed we hear more then about when it’s due on PC.

From medieval fantasy to cyberpunk dystopia, dive into a rich alternate world in the best RPGs on PC.

To begin with the android mechanic: when the player dies, an android will be left behind. Various data remains in that android (e.g. plug-in chips), and if you can reach it before dying again, you can recover that data. As in Dark Souls, you can only have one android at once, but there’s an added wrinkle in that androids can also expire on a time limit.

It seems you’ll also be able to ‘repair’ rather than simply recover your android, causing it to fight alongside you for a given period of time. If you’re playing online, you can discover and repair other players’ androids, and have them assist you too – a much more interesting idea than just watching how other players died. Squeenix are keeping quiet about whether you’ll get other players’ plug-in chips if you decide to recover, rather than repair, their androids.

The livestream also confirmed that NieR: Automata will get DLC. According to Gematsu, this decision was taken “under the request of 9S voice actor Natsuki Hanae,” who “hopes for a costume of Caim from Drakengard for 2B”, but it’s not confirmed whether he’ll get his wish. 9S and 2B are two of the three playable characters in Nier: Automata.

If you’re thirsty for more Nier news, a fourth livestream has been scheduled for February 23. It will be broadcast on YouTube here.