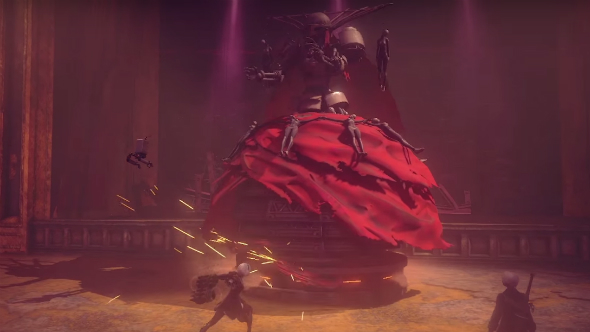 Actors always say they can ride a horse, and games journalists always claim to be able to speak Japanese. In most cases neither is true, though when it comes to Nier: Automata – the forthcoming action RPG from Platinum Games – even a basic grasp of Japanese would be handy right now.

Have a look at the best RPGs on PC here.

That’s because that’s the language the studio chose to conduct its latest Nier interview in. Speaking to German channel Hooked FM at Gamescom in Cologne last week, producer Yosuke Saito and composer Keiichi Okabe of Platinum took time out to talk about the PC version of the game, which they suggested will likely be locked at 1080p/60fps.

According snippets snatched by a handy poster on NeoGAF, Saito and Okabe said the team is looking into creating a lower spec version for players without high end machines. There’s a chance some detail has been lost in translation, however.

More certain is the fact the two claim the game is more bullethell than you’d expect, with Saito claiming director Yoko Taro has always wanted to make a bullethell game but hasn’t been allowed to before with Square Enix.

When it comes to the game’s music, Okabe had said much of the game’s soundtrack is being composed with little knowledge of the gameplay behind it. What’s more, he’s interested in perfoming concerts showcasing the music in the west, but the team are worried they wouldn’t pull in a big enough crowd.

It’s logical, then, that he suggests Platinum is waiting to see how Nier: Automata performs in the west before committing to any kind of tour. Apparently the chances of spin-off Mangas or anime also hangs on the game’s performance.

If you happen to speak Japanese, you can check out the interview in full below. Nier: Automata is due to hit PC in early 2017.