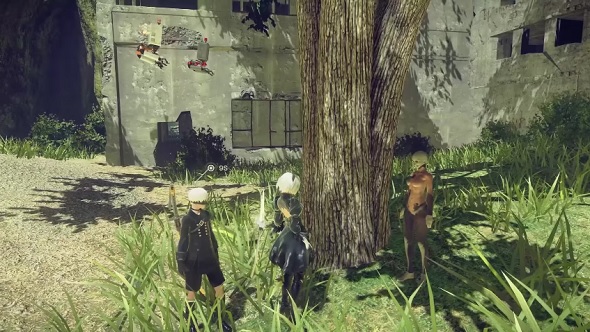 With the console release of Nier: Automata fast approaching, Square Enix have released a grand 27 minute gameplay runthrough of the action RPG, detailing some of its lesser known systems and features. One of these includes animal riding, where 9S and 2B can powerslide around on wild boars, even attacking off the backs of them.

For the dates of upcoming PC games, check out our comprehensive release list.

The Reliquary System is one of the major elements shown off in this footage, where players must return to the sight of their body to pick up any stat boosting Plug In Chips that you had equipped when you died. While it sounds similar to Dark Souls’ soul recovery system, you can actually revive your wrecked corpse in Nier: Automata and have it fight for you as an ally for a short period. The flipside is that if you leave your body for too long, it will disappear and eventually become an enemy you may have to fight on the overworld. If you died with a lot of powerful Chips equipped, get back to your body posthaste to avoid fighting a super-powered clone later on in your adventure.

One of Nier: Automata’s quest hubs is briefly shown in this footage, areas where players can pick up side quests to complete while out roaming the wilds. The outposts also house various traders who can sell players new weapons, Chips and Pods to help in combat. There will be multiple quest hubs dotted around Nier: Automata’s depiction of a desolate Earth so check in at one of these safe havens to get new side quests and weapons.

As seem to be tradition with recently release Square Enix RPGs, Nier: Automata has a fishing mini-game, where keen anglers can catch fish to either sell to traders or eat for temporary buffs in battle. So if you are struggling in taking down that hulking Goliath, a nibble on some crucian carp may give you that extra bit of power to defeat the robot.

While it seemed that we finally had a window for Nier: Automata’s PC release, Square Enix remain tight lipped about the actual date. At this rate, it’s probably best to expect a full statement once the game has successfully launched on PS4.