No Man’s Sky landed on the PC with all the smoothness of a rickety Soviet spacecraft navigating its way through a meteor shower. It was a rough ride, with bugs, stammering framerates, and worlds popping in jarringly in the not-so-far distance, as the game’s procedural generation rolled out before our eyes like some nasty stained carpet that no-one asked to see.

Keen to see how the game runs on PC? Check out our No Man’s Sky PC port review.

But since the recently released patch, intrepid PC players are now exploring the galaxy relatively unhindered, and quite a few people (about 50%, I estimate) are even enjoying it too. And a big bonus for us PC gamers are, of course, mods. Lots and lots of lovely mods to make space exploration prettier, easier and sillier. Here are the finest No Man’s Sky mods for your spacefaring leisure. 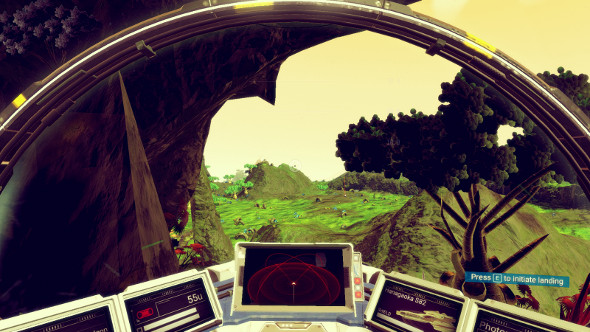 One of the legitimate complaints (as opposed to the countless absurd ones) about No Man’s Sky is the inability to fly close to the ground as depicted in all those snazzy early trailers. Instead, your killjoy of a ship automatically levels out when you get too close to the ground, which is the kind of safety precaution you might want to see in a real spaceship rather than in a videogame.

But thanks to the good work of modder Hytek and his LowFlight mod, you can fly closer to the ground, and even crash your ship. You can fly-swim underwater too, though beware of occasionally getting your ship irrevocably stuck in the terrain. Should that happen, this next mod will help… 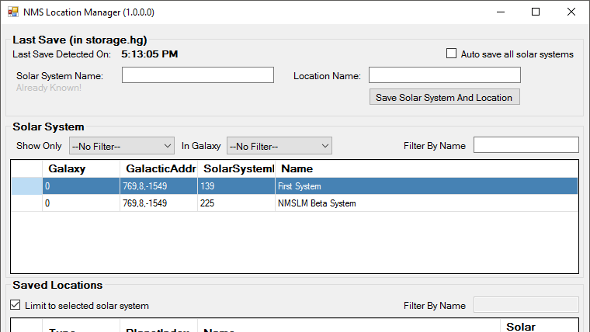 If you want to have an easier time revisiting previously-discovered locations, then this one’s for you.

NMS Location Manager tracks your location in the universe each time you save, so you can set waypoints to find your way back there later, or instantly teleport back to locations you’ve already visited. Best of all, you can share the location of your save with others, letting friends set waypoints or teleport to your neck of the galaxy. Sadly, we now know that you can’t actually meet other people, but you can check out how they’ve named the plants and species on their home planets, so that’s almost the same thing, right? 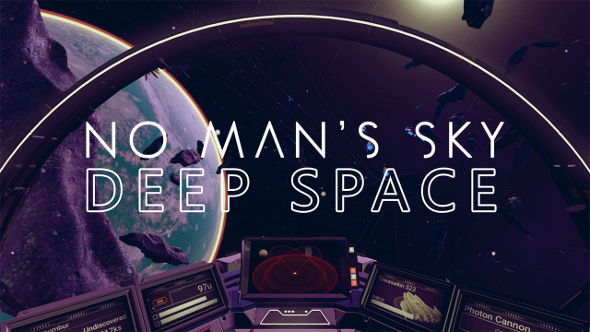 An all-in-one graphics rework that aims to make space in No Man’s Sky look spacier. Deep Space makes the void of the cosmos much darker and less fluorescent, while nebulae become less… in-your-face (had to resist saying they look more nebulous, which they do).

It makes changes on the ground too. The vivid rim lighting on flora and fauna (which makes things stick out from the background in a way that screams ‘Look at me! I’m interactive!’) has been toned down, making worlds appear more natural and atmospheric. Clouds are a little less opaque than in the vanilla game, and colours generally have been rebalanced to make the whole thing look a little less like an oversaturated 80s videotape. 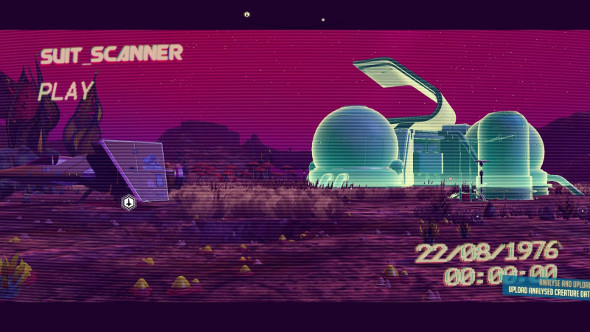 Not that there’s anything wrong with a bit of garish ‘80s oversaturation, which has the mysterious ability to pluck at our nostalgic heartstrings.

For those of you who think Vice City is the best GTA game and Blood Dragon the greatest DLC known to man, we present the Retro ’80s Binoculars! These replace the default zoom with a fuzzy, scanlined filter, complete with an old-videocam date in the lower right corner. It’s a natural, campy fit for the retro-futuristic looks of No Man’s Sky. 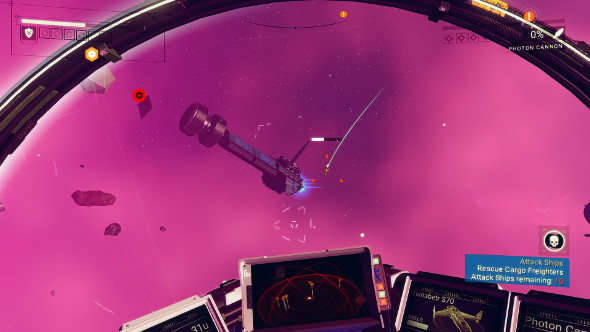 One of the common gripes people have had with No Man’s Sky is the emptiness of the universe; with no human players to interact and no sentient beings apart from traders to talk to, it can be an awfully lonely place.

Busier Space increases traffic around planets, so there are three times more planet fly-by and trading spawns, and four times more space fly-by spawns. Pirates increase threefold too, though you can switch this off if you’re looking for a more tranquil cosmic experience. You’ll also find a tenfold increase in traders aboard space the various space stations, and the scale of space battles has doubled, bringing them a bit closer to that Rebels-vs-Death-Star scale we all want to see in our space combat. 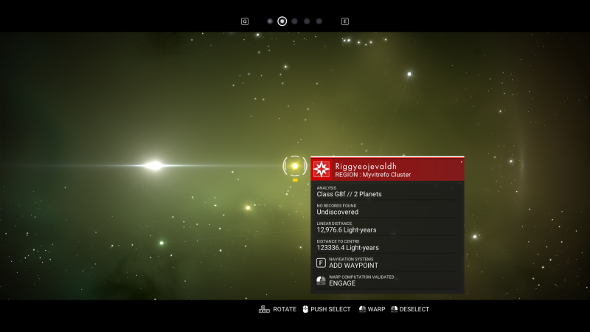 This may sound like a late-game Mega Man weapon that was left on the cutting room floor, but it’s far more than that. WithSuper Hyperdrive, you can travel 1000 times further than with the best of the standard hyperdrive functions on your ship.

Of course, both 100 light years and 10,000 light years fit into the broad category of ‘unthinkable distances’, and either way you’ll end up on a pretty procedural world populated by t.rex-headed bipedal donkeys with half-formed dragon wings (or something), but the very concept of being able to quickly zap to even more distant parts of the cosmos is awesome. Who knows, maybe this way you’ll actually reach the fabled centre of the galaxy one day… 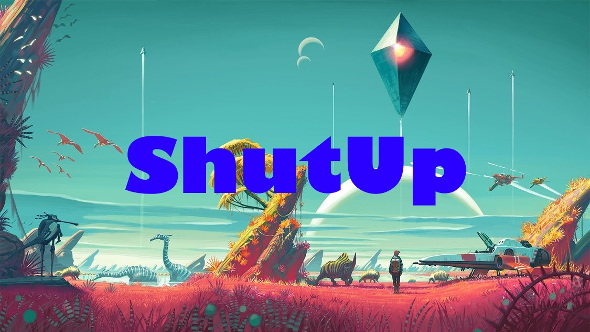 You ascend a hill on some uncharted planet, reaching the top just in time for the sunrise over the alien landscape. This is a sublime moment, it’s what the game’s all about, it’s– ‘TOXIC PROTECTION FALLING’. Well, there goes the moment, ruined as always by the incessant reminders from your Exosuit that you’re a small fraction of the way towards dying.

Shutup is an aptly named mod that allows you to disable individual sounds from your inventory and any or all of the warning messages from your exosuit that your shield, life support, cold resistance etc. is falling. You can even listen to a sample of the sound you’re disabling, just to verify that it is indeed as annoying as you remember it being while playing. 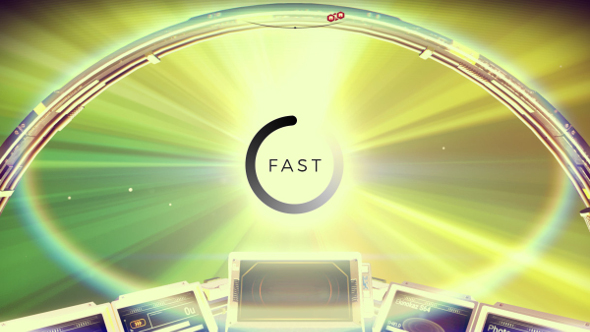 Whose bright idea was it to force players to hold a button in all the situations that you’d normally just click? It reeks of an idea conceived at 6am after a Red Bull all-nighter, with everyone agreeing that this unnecessary, fundamental change to interacting with everything in the game just might revolutionise the industry.

It doesn’t. It’s annoying, and Fast Actions fixes it by making a mouse click or button press enough to carry out normal actions again. 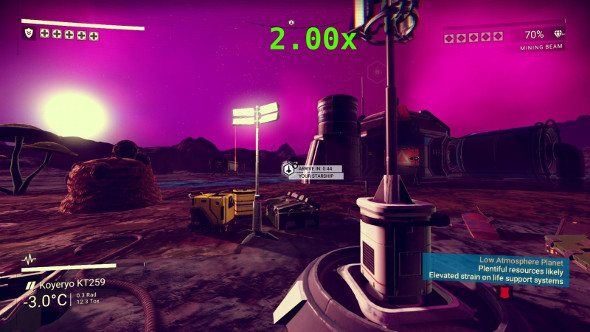 There’s a bug in NMS that renders the game in a lower resolution to the one you select in the graphics settings. So even though the settings say 1920×1080, the game might actually be rendering at 1280×720, for example. 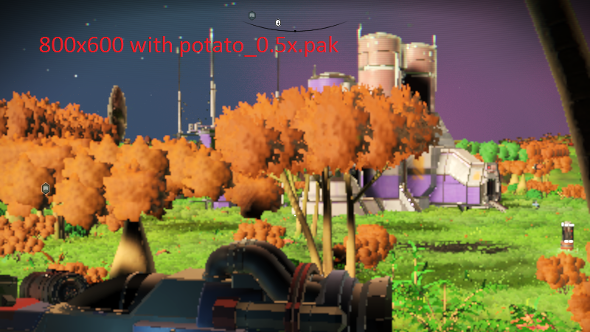 If you’re suffering from the reverse of the above, and find that No Man’s Sky is too strenuous on your humble PC, then what you need is Project Potato, which gives NMS a sort of N64 makeover.

Project Potato lets you downscale the internal resolution to as low as 0.5x, but in addition it has a bunch of presets that remove superfluous effects like post-processing, bloom and shadows, among other bells and whistles. According to the creator, it “lets the game run at 30 fps on shit laptops (i5 1.7ghz, geforce 820m)”, which is impressive – if a little world-shattering to people who until now thought their lappy with a GeForce 820m was ‘ok’, at the very least. 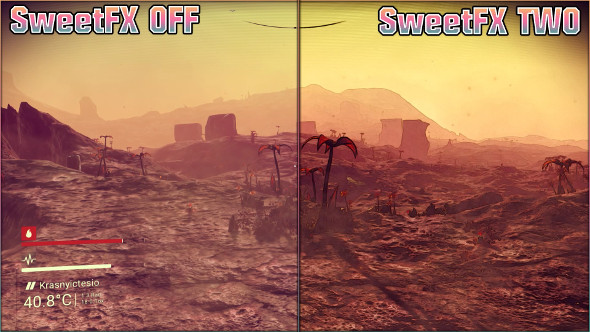 One of the more drastic visual overhaul mods for No Man’s Sky, Style Cell Shading Two ups the colour contrast, as well as making a number of other changes which make the universe look crisper and more vivid, giving it a cel-shaded ‘Borderlands’ kind of feel. Looking at the above pic, you almost feel like you could be basking in the arid wastelands of Pandora.

If you’ve had enough of the soft-edged retro vibes of vanilla NMS, then this is the perfect way to give the universe that more edgy, contemporary touch.

‘Is that it?’ you cruelly ask. Well no, we’re just waiting for more of your fine suggestions in the comments.