Of the many unique qualities No Man’s Sky exhibits, it’s the ability to retain an air of mystery that has really characterised its pre-release presence (N.B. the game’s out 24th June on UK shores). A sequence of enigmatic playthroughs from programmer and Hello Games MD Sean Murray has showcased the game’s razor-sharp visual design; the assemblage of countless classic sci-fi book covers creating a living, breathing universe; the impossible scale of it all. But what No Man’s Sky and Hello Games have thus far left open to speculation and imagination is your role as the player in that 18 quintillion planet playground. To put it reductively: what do you do?

At Hello Games HQ, controller in hand, and Sean Murray beside me, I find out exactly that. And it involves freezing to death alone in a self-made cave.

If No Man’s Sky doesn’t become one of the best space games on PC, we’ll eat our… er, protein pills. All of them. They’re ghastly.

It’s a hard game to play for half an hour. Murray has been working on it for years, and was instrumental in the maths behind its procedural generation – and he still regularly gets lost during playthroughs. It’s with an already flickering hope of maintaining a veneer of competence that I scan the horizon of the freezing – life-threateningly freezing – planet I’m dropped on and devise a plan for survival.

That’s the other thing about a game featuring 18 quintillion planets: there’s no guarantree that the one you drop a visiting journalist on will be as as habitable, or as scenic, or as exciting, as the last one you showed. The planet I look up at while my vital signs slowly diminish might be a tropical paradise, but I’d never know anything but frostbite and wasteland unless I survive long enough to find my ship.

I find the next best thing. A network of caves beneath the frozen tundra, warm enough for me to restore some health. That’s right, health. There’s health, and guns, and an inventory screen – it is a game, after all. 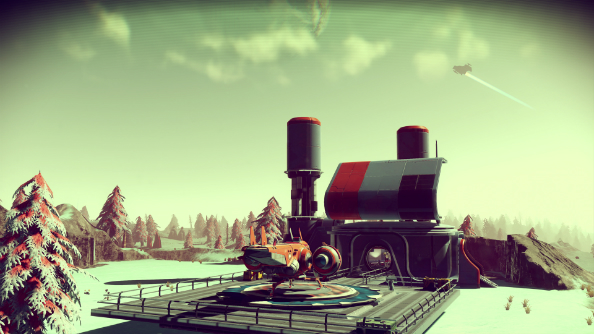 Since I keep stumbling into gatherable resources – you can give your surroundings a ‘ping’ by entering scan mode and highlighting nearby objects of interest – I decide to investigate my inventory and look for something to upgrade that’ll keep me alive long enough to get to my ship.

However, I’m out of luck. I haven’t gathered enough resources yet to upgrade my armour. That veneer of competence is fading fast, and oh god the developer is watching me just stand in a cave in his impossibly vast and brimming with possibilities game.Get it together, Phil.

I decide the next best upgrade I can afford is a grenade launcher for my gun, which I use to blast a hole upwards back to the surface, thus avoiding having the face up to the fact that I’ve now also become lost down here among the eerie glowing tendrils of the cave. I abandon any hope of having an adventure similar to the one Murray embarked on just minutes before, which involved quest-giving NPCs who speak alien languages you decipher over time, breaking into a secure building for the resources inside, and shooting away the drones protecting it. My adventure will be about lolloping gracelessly back to my ship, getting into orbit, and going somewhere warm. 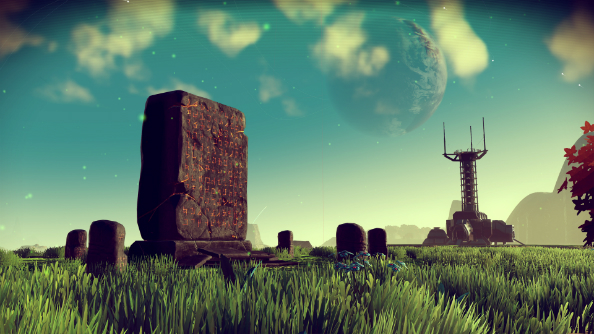 I should talk about the NPCs and the drone battles, shouldn’t I? It’s exciting to see such significant game elements simply existing in a game world, not placed at the end of a curated path by the hand of a level designer, but just out there for you to discover. That’s crucial to No Man’s Sky’s concept, and promise. It might sound unappetising to some to hear that the game’s about exploration, but when you qualify what that exploration actually entails, the game sparkles.

It’s not about virtual tourism – at least, not entirely. There’s what appears to be quite a complex space trading game to be explored, too. Resouces that are particularly abundant on one planet might be hugely valuable on another – if you can find and understand the NPCs who buy and sell them. So if you wanted to make it your mission to ferry those resources inter-planet, No Man’s Sky becomes a trading sim.

Conversely, you’re equipped with a gun and there’s nothing stopping you from firing it indiscriminately at every life form (artificial or otherwise) you encounter. It’s a shooter, then, if you want it to be. Murray observes that while it never occurs to some players to fire at indigenous wildlife, others do so seemingly instictively.

Then there are space-farers like me. The ones just quietly getting on with it, a bit bewildered, trying to stay alive long enough to see what’s round the next corner. And while I don’t make any meaningful strides towards the centre of the universe, or ecounter an NPC who I might be able to trade with or do a mission for, I stay alive long enough to understand what exploration means in No Man’s Sky – you’re exploring the game hidden within it, as much as you are the environment. 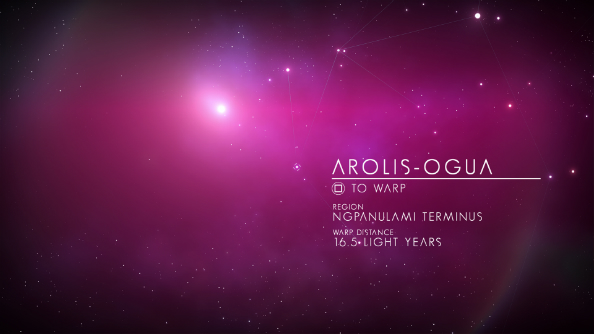 I did manage to find my ship, since you ask, and navigate safely out of that ghastly frozen atmosphere into the serene beauty of NMS’s star field. The moment of breaking through the clouds of a planet and watching a wider universe reveal itself has become something of a calling card to the game, but it’s no less enjoyable to do it after having witnessed it in trailers and playthroughs.

Navigating the handling model, powered Newtonian physics, with the expertise of a baby deer, I point my ship in the vague direction of the nearest planet. By hook or by crook, I will be warm. My mind’s temporarily blown when Murray points out that I can aim at the side of the planet in which it’s day, or the side currently in darkness. Such a small detail, but very effective for grounding you within a particular place.

I break through into the planet’s atmosphere (I chose the daylight side, incidentally). It’s… quite dusty. So dusty I can’t make out the surface, and have to rely on my ship’s dials to guide myself down, which involves inadvertently ascending back into space and then descending once more. Finally, I touch down on my new, warm home. 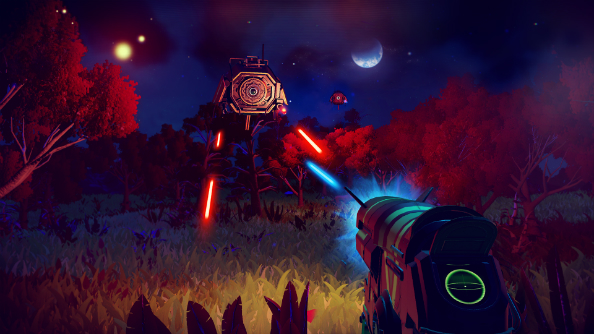 And when I say warm, I mean life-threatneningly hot. My vital signs are dropping with even more rapidity than they were on the last planet. There’s so much dust in the atmosphere I can barely make our my surroundings, but they’re not pretty. Very few flora or fauna seem to be living here.

Applying one of the few strategies I’ve learned this half-hour, I instinctively blast myself a little cave using my grenade launcher, and climb inside to shelter from the elements. I’m in here long enough to observe a haunting day-to-night transition. It’s then, as night draws in and the dust subsides, that I see it.

A reptilian creature, maybe 15 feet tall, resembling the nightmarish facsimile of a Tyrannosaur. The arms and legs are just as Jurassic Park depicted, but something about the eyes – the giant, bright white, sad eyes…

For the first time in No Man’s Sky, I feel compelled to kill something.

I fire a flurry or lasers at the poor, lumbering abomination. It doesn’t put up much of a fight, twitching spasmodically under the projectiles until the life left him. Instantly I feel terrible. I basically killed it because it looked ugly and reminded me of nightmares I might have had when I was five. I decide the only decent thing to do – once more applying the only meaningful skill I’ve grasped thus far in NMS – is to make a hole and bury it. 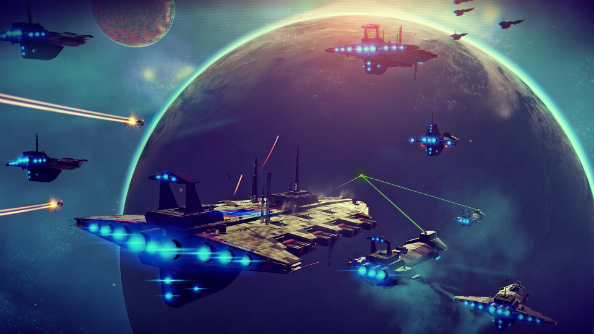 And it’s there, with it’s enormous tail sliding slowly into a shallow grave, that my session ends. I’m not quite sure what to say to Sean Murray, whose team of developers devised a playable universe based on a Fourier transform that adds billions of variables to a given planet’s topography, wildlife, temperature, vegetation, size, weather, sea level, NPC population, resource distribution and much more so that I could make a cave and shoot an ugly dinosaur.

Like I said, it’s a hard game to play for half an hour.

But in that time, I got the smallest glimpse of what’s actually possible in No Man’s Sky, and it amounts to more than simply ‘space trading game’ or ‘survival sim’ or ‘opportunity to assign rude names to planets/creatures.’ It’s more than the sum of those component parts, too, because of the striking art direction that coheres it all together, and the sense that despite every inch of its universe being generated by maths, there’s an authourship to it.

It’s hugely daunting, of course. It’s going to take a few hours of patience before you can begin to understand and exploit its systems to make survival easier, and exploration more efficient. But as long as there’s something tantalising on the horizon, that feeling of being slightly overwhelmed is counterbalanced by the desire to understand what it is that Hello Games have created.