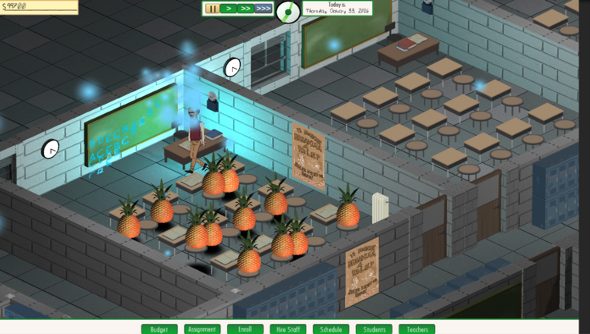 Seth Alter makes unusual games. First, there was Neocolonialism, a digital board game that flipped the world upside down and tasked players with managing a corrupt corporation and exploiting the world. What at first seemed like a economic strategy game transformed into an almost roleplaying-like experience with players stepping into the shoes of the villains.

No Pineapple Left Behind is infinitely more unusual game, though. It’s a school simulator, but a wizard has turned the school children into pineapples. These sentient fruits are simple – they exist solely to take tests and get good grades. But if they are left to their own advices, they become children again, and they are much harder to look after. This is a game that has a lot to say about the American education system.

Alter is all too familiar with how schools work. “Before I made video games, I was a teacher,” he says. “It was a terrible job and the administration did not treat the students as humans. I quit that job to go full-time indie; No Pineapple Left Behind is a direct response to the old job.”

It’s a management game, and Alter likens it to Prison Architect, but set in a school instead of a prison. The budget must be balanced and the school children have to be looked after, and the primary goal seems to be avoiding bankruptcy.

Almost every aspect of the game seems to be derived from Alter’s less than positive experiences as a teacher. The school’s budget is determined by the average grade of each classroom full of students, and as pineapples, they might not get great grades, but they are consistent and easy to manage, presumably making the school easier to maintain.

But they can become human again, and that’s complicated. They get bullied, have social hierarchies and are full of pesky emotions. But if looked after, they can get As. It’s more challenging, but more rewarding.

Teachers can be treated like a disposable commodity, too. “Teachers start out cheap and inexperienced. Over time, they lose energy, which affects their competence. The better their salary, the faster they recharge their energy. Will you retain a small number of well-paid, skilled teachers? Or will you have a large number of burned-out, poorly-paid teachers that you just fire and re-hire over and over?”

It’s lovely, satirical weirdness and all sounds a bit bonkers.