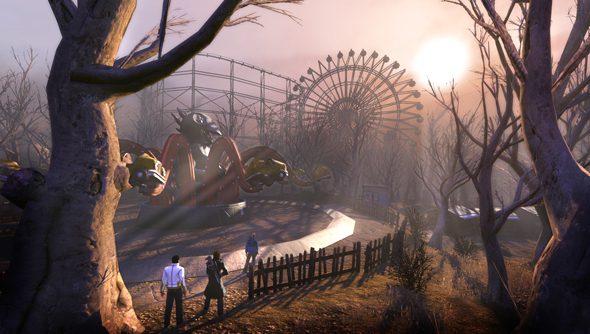 Funcom have spent years training their Secret World playerbase to believe in every conspiracy that crosses their earlobes – so when they heard whispers on Wednesday that the developers’ offices had been raided by Økokrim, Norway’s financial crime unit, they were inclined to take it as fact.

Økokrim suspected that Funcom had infringed on their Securities Trading Act, and trading of the company’s stock was brought to a screeching halt for much of the day. As worrying signs go, these were among the most worrisome.

In the cold Scandinavian light of day, however, Funcom are the picture of optimism. Their stock is back in business, and the developers told PCGN that they’re “fully committed” to the ongoing post-release development of The Secret World and their new LEGO Minifigures game.

Økokrim’s investigation has centred around financial information on The Secret World the developers disclosed to the Norwegian stock market between August 2011 and September 2012 – two months after the game’s launch. To compound one sticky mess with another, like pouring honey on treacle, investigators believe there’s a chance that proper documentation for the period hasn’t been maintained.

Funcom, for their part, have been “fully cooperating” with the new visitors, ladening Økokrim with “all necessary information” to ensure the situation can be “clarified and resolved” in short order.

Production of all Funcom continues “as normal”, and the company say they’re “fully committed” to both the new games they have in development – among which LEGO Minifigures Online is top priority – and the live operation of their existing games, including The Secret World, Age of Conan and Anarchy Online.

The Secret World live team are in the process of finalising the game’s ninth major update, which takes players to Tokyo. We’re promised details and screenshots of that soon.

Funcom ideas wizard Ragnar Tørnquist left the company last year to start a new adventure game studio. Development on hisDreamfall Chapters, too, continues apace – and there’s no suggestion that the funding and license provided Tørnquist by his former employers is affected by the investigation.

Let’s hope this once-proud teller of massively-multiplayer stories gets back on its emaciated feet okay, eh?