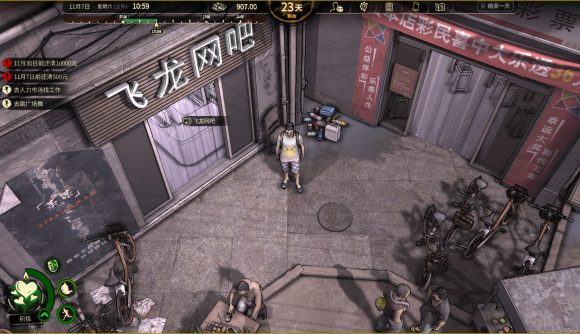 We’re sadly nearing the end of the Steam Next Fest and its bonanza of free game demos, but there’s still time to dive in – and still plenty of players enjoying what’s on offer. One demo is standing tall above all the others, however, with player counts busting into Steam’s top 50. That game is Nobody: The Turnaround.

Nobody: The Turnaround is billed as a “realistic life simulator”. You’re in debt to loan sharks, who are (treat this as a bit of a content warning) threatening to sell your sister into slavery if you can’t come up with a certain amount of money within a month’s time. To do that, you’ve got to take on odd jobs throughout a modern Chinese city, keeping yourself fed, rested, and emotionally stable as you go.

It’s a bit reminiscent of Shenmue, with its repetitive job minigames and open-ended city exploration, but there are a fair number of RPG elements, too. You’ll build up skills as you take on various jobs, as well as personality traits based on how you respond to certain dialogue options, which will open up new jobs or story branches as you move forward.

It’s tough to get a sense for where it eventually goes in the 30 minutes I spent with the demo, but it seems you’ll be able to build yourself a success story, getting off the streets and running businesses if you play your cards right.

Nobody: The Turnaround has had some pretty astounding success so far, as it reached 45,157 concurrent players yesterday, as SteamDB shows. Other Steam Next Fest demos have struggled to even reach the 5k mark. Judging by the language of conversation in the game’s Steam forums, the interest is driven primarily by Chinese players, though the game is fully playable in English.

You can check out the demo for yourself over on Steam, ahead of the full game’s launch in 2022. For more indie games to check out in the meantime, you can follow that link.