Far below the satellite-mounted thermal camera, I watched two commandos move through a deserted suburb, their ghostly white outlines shifting gently as they take turns covering each other. I was playing one, and another player controlled the other. Our sessions had started separately, but we stumbled across one another on our travels and started moving together as we scavenged the wasteland.

My companion went inside a house to look for a better weapon. I stayed outside to keep watch. He never came out. That’s how it goes in Noct, a top-down horror shooter from C3SK and Devolver.

One of the things that made the gunship level of Modern Warfare so memorable was the vague, chilling horror of the entire sequence. Whether or not Infinity Ward really meant it to come across this way, or whether they were simply trying for a high-fidelity re-creation of Liveleak gun-cam footage, is a question for another day. The eeriness of that sequence was undeniable.

The thermal sights recast physical reality as nothing more than a collection of dusky gray shadows, while turning humans into glowing specters. It was warfare as Gothic Impressionism. Violence and horror were distant and remote, yet fully under players’ control.

That aesthetic is put to great use in Devolver’s upcoming Noct, a top-down horror-shooter that you play from the perspective of a distant reconnaissance satellite. You move through a ruined landscape cast in the shifting murk of IR imaging, where monsters loom out of the darkness and attack with a scant moment’s warning.

Noct is a brutally hard game, even with a teammate there to help watch your back. The Hotline Miami influence is being felt far and wide these days, and Noct doesn’t permit much greater margin for error. Once the giant, insectoid monsters spot you, you have only seconds to pump them full of so much lead that they fall dead at your feet. If you miss a shot or hesitate for an instant, it’s probably curtains for your commando and you have to wait as your respawn and resume your journey.

The conceit of Noct is that the world has basically already ended in an occult apocalypse. Civilization is gone and most of the people on the planet are dead. The world is shrouded in darkness as a magical miasma has blotted out the sun, and giant centipedes and spiders roam the wasteland. Because the miasma blocks most visible light, the only way to see what’s happening is with the aid of thermal imaging.

It’s a marvelously tense, creepy game. Forests criss-cross the screen above your characters like spiderwebs. Broken-down cars and abandoned loot litter the ground around outposts of former civilization. From your remote perspective, everything is oddly hushed and detached. When a threat is nearby, your character notifies you that he or she has heard something, putting you on notice that you’re being hunted. Then an enormous, blurry gray-white monster will come rocketing across the screen and you just start praying you can hit it with enough SMG fire to bring it down.

Houses are where the real terror lives, though. In open ground, you have some warning and room to maneuver. Once you enter a suburb, however, and start scavenging your way through houses for equipment, terrifying and unmerciful close-quarters combat is the order of the day. Naturally, it’s these places that seem to breed monsters as well as the best gear. 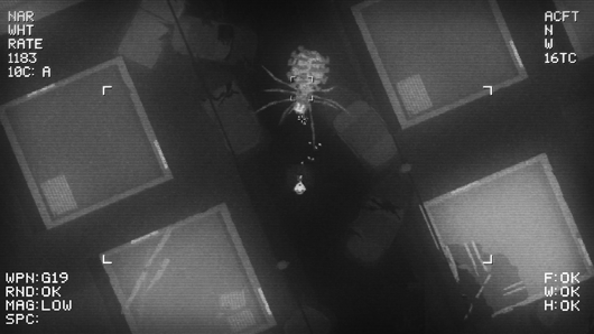 What I saw at PAX was definitely interesting, although perhaps a one-trick pony. The difficulty was so high, too, that terror began to give way to frustration set in. The Hotline Miami combat seemed at odds with the long, drawn-out journeys across the ruined countryside and stealthy scavenging.

On the other hand, PAX was probably not the best place to appreciate Noct. The noisy show floor, and the hurry to get through the demo, certainly impinged on Noct’s atmospheric ambitions. I also wonder if the mission design gets beyond the “Go to A, the go to B” stuff I saw there, and whether combat gets a little more nuanced than, “SHOOT IT SHOOT IT!”

Still, as an experiment in art and atmosphere, Noct is off to a promising start. I only spent about ten or fifteen minutes playing it, but it’s a game I’ve been thinking about quite a bit ever since. It looks like a simple game with a truly memorable and unique presentation. I hope the final game can live up to it when it comes out later this year.