They come from the rooftops as night falls. Growling, snarling things. The humans huddle together in a courtyard, eyes frantically darting, bows and guns constantly shifting targets. A shadow passes over them, huge, bat-like wings blocking out the moon. Bolts, arrows and alchemical grenades fly into the air, and the hideous vampire flees. It was a diversion. There’s a streak of grey flesh, and one of the creatures fells a hunter. The rest of the humans run and hide in buildings as their companion is dragged off into the night.

I didn’t expect to enjoy Nosgoth, Psyonix’s free-to-play 4v4 multiplayer arena game, as much as I have been. It’s a simple premise: humans and vampires beating the crap out of each other, but the interesting range of abilities and ease with which one’s life can end gives it surprising tactical depth. It can be tense and nerve-wracking, savage and empowering, and most importantly – there’s buckets of blood.

Let’s get one thing out of the way: Nosgoth is an inexplicable use of the Legacy of Kain IP. It’s a cult franchise that – despite being great – isn’t particularly relevant today, and Nosgoth doesn’t play to its strengths at all. There are no memorable characters, no epic, sweeping storyline, no tragedy and no time travel or dimension jumping.

Get over it. Pretend, like I have been, that this has nothing to do with the venerable series. There’s enjoyment to be found here, just not any connections to the franchise. The most important concern is if it will be something people will be playing a month or two after it launches. What is clear to me, though, is that it’s been a surprising amount of fun for the last couple of weeks. 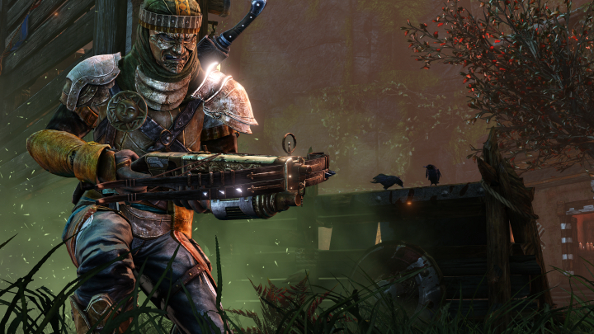 Humans and vampires, classic enemies. Nosgoth sees both races duking it out in ruined, burning arenas filled with crumbling homes and twisting, turning alleys. The humans are ranged warriors with tricks up their sleeves. The Hunter has a rapid firing crossbow and can launch special ammo that explodes or ties vampires up, the Scout is an archer who can pepper the battlefield with enough arrows to blot out the moon and the alchemist fires alchemical grenades out of a big gun and sets fire to everything. They can sprint away from foes, dodge out of the way of attacks and have all manner of tools to get out of tricky situations.

The vampires, on the other hand, are closers. Melee combatants that excel in getting up close to an enemy and slicing them to pieces. The Reaver can launch himself at foes from a great distance, ripping them to shred when he pounces on them, the Tyrant is a behemoth who can make his flesh burn and use his great strength to create shockwaves and the Sentinel is a horrifying, deformed creature who strikes from the skies.

Each team gets a shot at playing both factions in every battle, which I confess I wasn’t a fan of at the start. The vampires are more immediately compelling, and I felt like I was being forced to play a faction I wasn’t interested in during every fight when I switched over to the humans. But I’ve come around. Both sides are very different, and not just because of their diverse abilities. 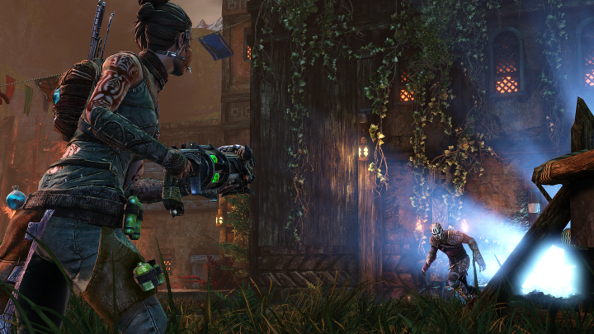 Vampires are predators. They can climb up the sides of buildings, leap across gaps and – in the case of the Sentinel – float across the battlefield. They stalk their prey and attempt to close gaps fast before escaping into the darkness. These monstrous beasts feel powerful, but can still be easily dispatched by humans working together.

Even though they aren’t, humans feel more vulnerable. They don’t have preternatural powers and are at their best when taking enemies out from a distance. As unlikely as it sounds, the human experience is not all that far removed from survival horror. Hunted by terrifying monsters, they have to stick together, constantly keeping an eye out for an inhuman shape lurking in the shadows or hovering above them.

The abilities of both factions can be swapped out for new, thematically appropriate powers bought in the shop – either outright, for a ton of gold, or rented for seven days – and though they are initially flashy things that are just fun to mess around with, they eventually tie into clever tactics.

It all started to make sense for me during one battle where, playing as vampires, my team was getting decimated. We weren’t sticking together, leaping on the humans as one, and when I flew over a burning courtyard and saw all four humans, I was all alone. 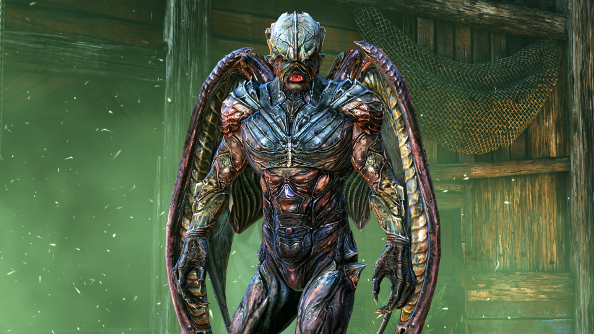 Diving down and attacking would have been pointless. I might have been able to take one of them out, but I wouldn’t have been able to escape with my life. I had just purchased a new ability, though, and suddenly it was clear that it was meant for this very situation. I swooped down, grabbing an unsuspecting Scout with my claws. The humans fired, but only a few arrows found their target before I was away, with my prey dangling beneath me.

Far from my enemies and from a great height, I dropped the Scout. He wasn’t quite dead yet, so I sped towards the ground to deliver the killing blow. As he lay there, dying, I fed, regaining all of my lost health. I felt like an absolute boss.

Healing can be a tricky business in Nosgoth. Vampires, as I’ve mentioned, can regain health by feeding. This starts an animation that can be cancelled, but that leaves them without the added health, though that may be better than taking a few arrows in the back during dinner time. Humans need to visit shrines dotted around the map, which then vanish until they’ve cooled down. It’s a preferable mechanic to regenerating health, forcing players to kill to heal up, in the case of vampires, or explore the battlefield if they are playing as humans.

Despite the joy of stalking fleshy meat sacks from rooftops or putting an arrow through a vampire’s skull and then watching as he becomes a blood-red mist, it’s not all good times and wanton slaughter. Jules wasn’t able to play a game at all because, even after an hour of trying, he couldn’t connect or load the game. And there’s the microtransaction guff: new abilities and weapons all need to be purchased from your earned or real currency. The game’s selling cosmetics, too, although they’re pretty lacklustre: boring skins that don’t really look all that different from each other. 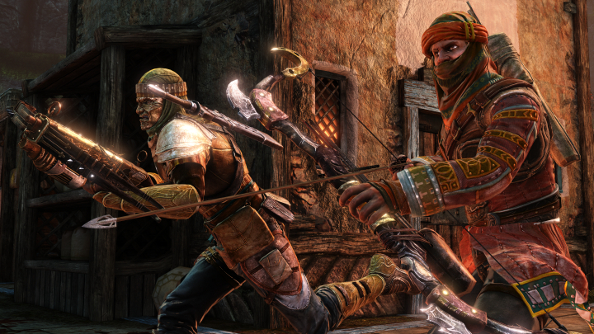 It’s not all doom and gloom, though. The non-cosmetic items can all be bought with currency earned in battle, and after a few wins I was able to pick up a new ability and after a few more, a new weapon. The advertised price is a bit cheeky, however. One of the Scout’s bows is 300 gold or 200 of the premium currency, the former of which is very easily obtained. But clicking “buy” reveals a different story. The 300 gold isn’t the cost of buying it, it’s the cost of renting it for a week. The actual purchase costs 1,500 gold. Still not absurdly expensive, but the lack of clarity is a bit frustrating.

I’ve barely bought anything, despite being given a hefty amount of gold even before I started playing. I’ve remained competitive, though I’m not sure how long that will last when more players start appearing. It’s only in alpha right now, and the servers are pretty quiet.

I’ll admit some preconceptions when I started playing Nosgoth. It was a pretender, ruining one of my favourite franchises, ignoring all the things that made it great. But it does some pretty great things despite having nothing to do with the adventures of Kain or Raziel. It is definitely worth your attention.