Johan Andersson is showing me around Stockholm’s Old Town on a beautiful spring afternoon, pushing his one year-old daughter, Adela, around in her stroller while we talk about games and the business of making them. From time to time, Adela shoots a suspicious glance my way, eyes narrowed. Perhaps she senses her father and I are bound to be mortal enemies, or maybe she’s looked up my reviews of previous Paradox games.

By either standard I’m a bit of a frenemy. I tend to like Paradox games, but with significant reservations. I’m also here in Stockholm to place Europe under my iron-shod heel in a massive multiplayer game of Europa Universalis IV. By geography and by the cutthroat nature of a twenty-person multiplayer session, we are bound to find ourselves at war.

But today is for preliminaries. Johan tells me how good it’s been to step back from designing EU and work in a more supervisory capacity. Traditionally, he’s the one leading development and making the major design decisions, but with a baby and a growing studio, he’s been happy to lead QA and playtesting while project lead Thomas Johansson has set about reinventing the wheel.

“It also means I get to arrange things like this,” he says with a grin and an elfin raise of his eyebrows. “I mean, it’s marketing and I was able to say we’ll get great coverage out of it but, really… this is just fucking fun. It’s going to be awesome.”

I laugh, then admit, “The session we had in Iceland probably changed how I’ll review your games going forward. I don’t think I’d have liked March of the Eagles all that much as a single-player game, but I’ve been playing the hell out multiplayer since we got back.”

“March of the Eagles…” Johan shakes his head, then retrieves Adela’s stuffed Piglet. “I’m just glad it turned out okay. …We really had to work hard to get that released this winter.”

March of the Eagles began life with AGEOD / Paradox France, a wargaming studio that joined the Paradox fold a few years ago. Earlier this year they left Paradox to join Matrix Games, a major wargaming publisher, and March of the Eagles had to be completed by Paradox Development Studio. 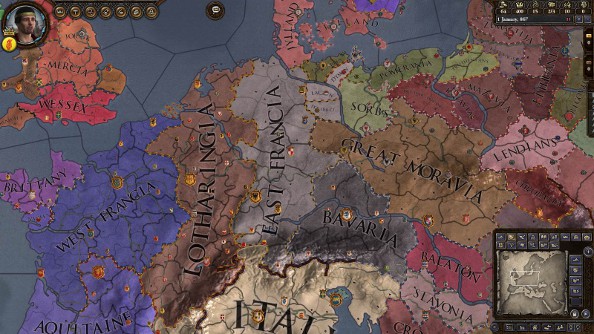 Johan admits that the partnership was an awkward one, in large part because AGEOD and Paradox employ very different business models despite superficial similarities in subject matter. Paradox have a reputation for being a niche publisher, but they still count their audience in the hundreds of thousand. Paradox deal in big topics and modular expansions. Medieval politics, now with Celtic and Nordic tribes! World War II! The Renaissance and age of colonization – now with more Asian factions!

By contrast, AGEOD (and many other developers in this market) make intricate one-off wargames about specialty topics: The Seven Years’ War in Germany, theater operations and command and control during the American Civil War. Both companies could be described as niche from the point of view of a major publisher, but they’re actually in very different businesses. Paradox are charming history nerds, but there’s a calculating streak to the company.

Here’s a story I heard from Boel Bermann, Paradox Development Studio’s PR manager: a couple years ago a bunch of Paradoxers were at a trade show in North America. Everyone had just started playing Kairosoft’s Game Dev Story, a simple smartphone game about resource management. You hire a dev team, you make games, you release them, you see how you did, you maybe hire more team members or maybe you hire better team members and then set the overall direction for your company.

Everyone at Paradox started agonizing over this game. Other developers at Paradox were risking everything on hiring the best staff, working to make the absolute best games they could. Time and again they end up underselling, despite strong reviews. They were running low on funds, cutting staff, and looking to abandon major game releases. Someone finally asked Johan how he was doing at Game Dev Story.

He looked up from his phone. “Oh, I just sold my tenth game, I’ve got a decent sized staff, and a few million in the bank. They’re all 70 Metacritic, but they always sell like crazy.” 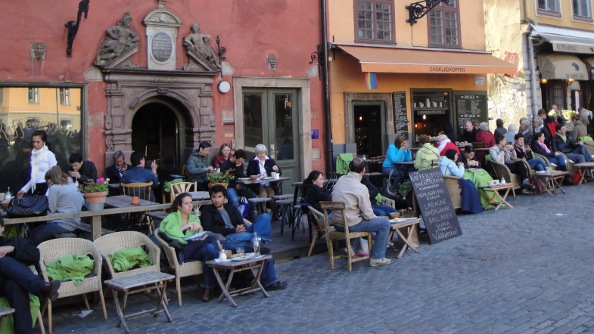 And that is Paradox. Johan is an endearingly shy and soft-spoken man. But he always keeps an eye on the pay-out. He tries to make good games first, and then thinks about how he can make them better. Some of Paradox’s games are great, some are okay, and some are badly flawed despite lots of promise. Above all, they are profitable.

The approach has paid-off. They’ve grown from a company of about a dozen to over a hundred, and are finally running out of space in what they thought would be the last office they’d ever need. All of their expansion has been financed by their own profits; Paradox Interactive have no major financial backers, and have never taken an injection of capital.

It’s an approach that has protected Paradox’s identity in many ways. Fred Wester, CEO and president of the company, tells me that, “we are always in charge of what we are doing. We can plan our business ahead for two years, and say what we want to do for the next eighteen months, and how we’re going to do that. Without anyone interfering in the way we’re working, or what kind of profits we have to do, or what kind of games we need to close because we need to show a better profit for the next quarter, or the next year.”

On the other hand, they talk constantly about how they are working to improve their publishing lineup, although the results have been mixed to date. Increasingly Paradox are trying to take an honest, unsentimental look at their development partners to see what games are on track to reward the investment, and which ones are headed for disaster.

This is where Paradox are still struggling. In Iceland they were confident they’d addressed a lot of their quality issues, and so were their partners. They had staffed-up on the production personnel, and were keeping a closer-eye on their developers to make sure each game was on track and getting the resources it needed. This year, Paradox said, they were going to do better with quality.

It’s easier said than done, even after changing procedures and expanding oversight. Impire came out to very mixed reviews, as did The Showdown Effect. Neither was a catastrophe like 2012’s Gettysburg: Armoured Warfare, but neither quite lived up to expectations. Shams Jorjani, Paradox’s VP of business development, stresses that the games we see today reflect decisions and from two years ago. Paradox are making strides to improve their games’ quality, but in some ways they are still playing catch-up.

“A lot of the times, we work with first-time developers,” Jorjani tells me. “That’s been a HUGE challenge.”

He elaborates. “It’s really easy to just say, ‘Okay, they’re inexperienced.’ But what does inexperience mean? Ultimately it means that we end up having to explain everything. And we have to sit down and have discussions about things we wouldn’t otherwise. And that saps energy, and that saps time.”

Paradox face a smaller version of the same tensions that drove most major publishers to become masters of large-bore regurgitation. If you talk to Jorjani and Wester, they love being a quirky publisher that makes cool games that nobody else would ever give a chance. It’s easy to look at Magicka, for instance, and say with the benefit of hindsight that it was a good bet. At the time, it was an odd little action game about little dudes in robes nuking the hell out of each other.

“We’ll still always work with first time devs,” Jorjani insists. “Because we feel that a lot of the innovation and risk-taking comes from people who are not yet constrained by all the restrictions that exist in game development. They do take chances, and the thought that this is actually impossible to make never crosses their mind. And sometimes they make it.”

Paradox are still figuring out what further growth and success should look like. Everyone loves a risk taker, everyone loves a company that buys into a unique creative vision. But everyone loathes a bad and buggy game. Paradox Interactive are trying to retain the former while eliminating the latter. They will likely continue to err on the side of daring and idealism, judging from the way Wester frames the choices.

“If Activision is Bieber,” he tells me, “we’re Motörhead.”