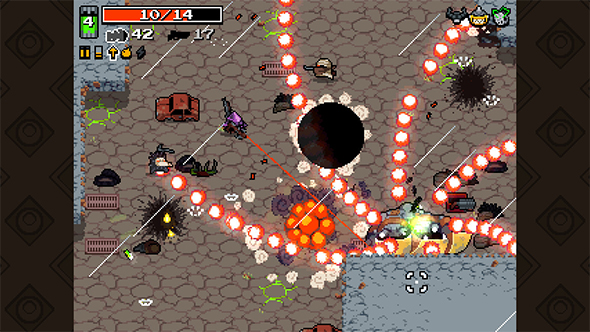 Apocalyptic indie bullet ballet Nuclear Throne has been a colorful mainstay of the indie greats for years, and while Vlambeer’s updates have slowed to a trickle since the game left Early Access in 2015, there have still been occasional balance changes and bug fixes that brought us all the way up to patch 98.

For more of the most unique games you can play, check out the best indie games on PC.

But we’ll never make it to triple digits, as Vlambeer have released update 99 as the final patch for Nuclear Throne. The patch adds “almost too many bugfixes,” alongside borderless fullscreen options and more consistent seeding, but the real story is that Vlambeer are preparing to move onto something new.

Exactly what shape that new thing will be remains to be seen, but the team are prototyping new ideas according to a Reddit AMA. It seems they’re looking to work on something smaller – similar to previous titles like Ridiculous Fishing and Super Crate Box – as producer Rami Ismail says the more substantial Nuclear Throne was “was really, really rough on us.”

Ismail adds “While working on it was great, getting it wrapped up and being ‘done’ with it was awful. I think after this, we’ll do some smaller stuff. Get our creativity moving again. We need it.”