Calling “Smart TVs” the future of television, Nvidia today announced… the Nvidia Shield! It’s back! But now it’s a set-top streaming box, it’s a game console, and it’s a game-streaming machine! It’s going to be just $199, but is it a series of solutions in search of problems?

Nvidia started out by promising a new TV, a new console, and a super computer, which was a coy way of describing the Shield’s features. But the problem, of course, is that the Shield is not really any of those things, but it’s also a little hard to describe exactly the role it does fill. So let’s dive into the features.

The Nvidia Shield is a “set-top box” running Android and connected to the Google Play store. You sign in with your Google account info, and you have access to the same library that you have for your Android phone.

It also has Android’s voice recognition, which Nvidia CEO Jen-Hsun Huang spent a few minutes playing around with on stage and demonstrating that, yes, Android does not, in fact, know what the hell you are saying.

But the other part of the Shield, the console part, comes via the Tegra X1 chip, a mobile processor with more horsepower than an Xbox 360. With something the size of a dessert plate, you’ll be able to play a lot of recent games. Nvidia pitch this as a way to expand the reaching of gaming, and improve accessibility over what’s possible on console and PC at the moment.

Huang laid out the vision when he said, “…we can leverage somehow the power of mobile cloud, and do for gaming what Netflix did for video, or Spotify did for music…”

However, things got a bit awkward as Nvidia brought out a series of developers to show their games running on the Shield via the Tegra X1. While Randy Pitchford came out to brag about how Borderlands: The Pre-Sequel is running at 30 FPS on the Shield, on screen the game was visibly chugging like, well, like a game running on hardware vastly below recommended specs. 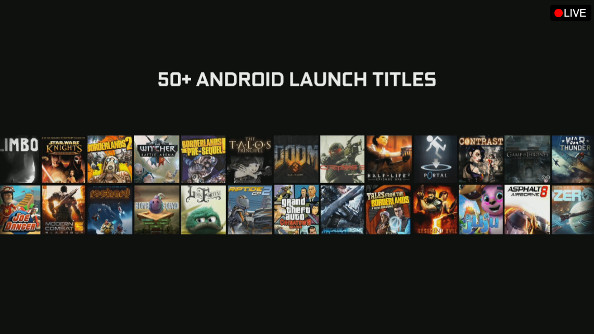 Croteam’s Talos Principle fared much better on the Shield, while Crysis 3 seemed to perform adequately. Id’s Tim Willits appeared to show Doom 3 on Shield and, as you would hope for a decade-old game, it seemed to be running pretty well.

Finally, Nvidia got to the “supercomputer” part: the Nvidia Grid. a game-streaming service capable of 1080p at 60 FPS. They showed it running GRID 2, which looked terrific, but of course, it’s worth asking how that experience will be on most people’s internet connections.

Overall, Nvidia’s presentation was awkward and didn’t do a great job of establishing who, exactly, needs a Shield in their life. But their case started getting more compelling when the discussion came around to price.

The Nvidia Shield will sell for $199 and it’s out this May.

And at that point, this awkward little machine doesn’t seem quite so absurd. That’s an awful lot of versatility for a pretty low price. It’s probably not the machine for people reading this site, or people debating between a PS4 or an Xbox One… but if you’re on a limited budget and you want a machine that’s decent for having gaming and streaming options for your TV? The Shield might be an okay option. Especially if the game-streaming lives up to Nvidia’s billing.

But that’s a big if.