Expectation and excitement is building as the hype machine rolls ever onwards to a potential August / September release for Nvidia’s new GTX 1180 graphics cards, and an enterprising Vietnamese retailer, H2 Extreme Gaming, is taking the opportunity to squeeze some pre-order cash out of gamers.

For the low, low price of 31,800,000 VND – which is about $1,400 or £1,050 – you can bag yourself a pre-order of an MSI GTX 1180 Gaming X with 16GB of GDDR6. Which is a bit of a bargain, as everyone knows non-existent graphics cards are more expensive than real ones. It’s just one of those internet rules, like the one about the amount of online hate you’ll get from putting a lady on a game cover without her wearing a bikini/boob armour.

Check out our pick of the best graphics cards that actually do exist right now.

Now, we’re not disputing that, when it comes to the crunch, MSI will be right there producing red and black versions of the GTX 1180 when they’re good and ready. But that’s not now, and sites taking pre-orders for the cards before any pricing has been announced are doing very bad things.

The same site also had a listing for an Asus STRIX GTX 1180 card too, but that has since been taken down. Maybe the so obviously photoshopped image the site used had something to do with it. They hadn’t even bothered photoshopping the ‘GTX 1080’ from the top side of the box.

If you’re going to do some photo editing at least take more than 90 seconds doing it. 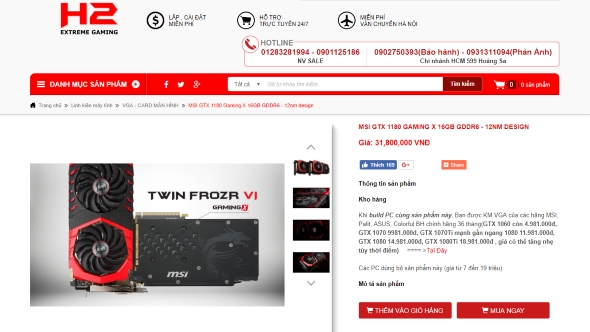 The site is massively jumping the gun here, as we’re expecting the next-gen Nvidia cards to launch sometime in the August – September window, and that’s just for the reference versions.

Nvidia isn’t going to allow the likes of Asus or MSI to strap their own third-party (and superior) coolers onto the new 12nm GTX 1180 GPU until at least a month after the full launch of the first cards.