A GDDR6-powered next-gen Nvidia graphics card popped up on Reddit yesterday, and promptly disappeared. It’s an engineering PCB with a whole load of connections, fans, power sockets and Micron GDDR6 memory chips… but no actual graphics chip. This could potentially be the test board for a new gaming GPU, or for a new Quadro.

What it definitely is is a test board for something new. Well, it’s either a tester or Nvidia has gotten super lazy with the design of its reference coolers. There are no cards at the moment currently utilising Micron’s GDDR6 memory, indeed Micron only mentioned on Monday that it was entering volume production of its 8Gb GDDR6 silicon.

Check out our pick of the best graphics cards of today.

The current generation of Nvidia cards either uses GDDR5 memory or, for Volta, HBM2, so it seems pretty nailed on that this is an engineering board made ready for some next-gen GPU. It’s a shame there’s no actual graphics silicon nuzzling into this PCB, but it’s still an interesting look at some early graphics card pr0n.

It’s also interesting that the image has already been removed from Reddit, but thankfully Videocardz grabbed the image before it was taken down. 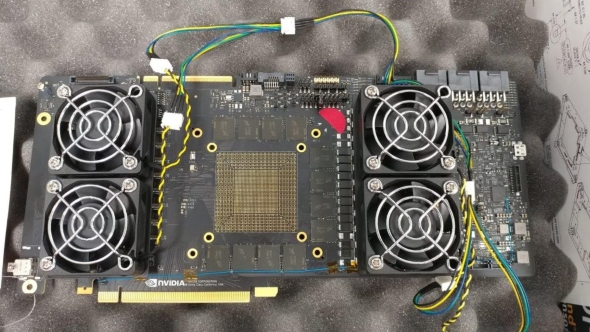 So yes, the 12 Micron GDDR6 memory modules are the most interesting part of this particular PCB puzzle, indicating that the next-gen card will likely come with 12GB of the newly minted video memory. The expectation is that this would run across an aggregated 384-bit memory bus, which would give it some serious memory bandwidth. Micron has previously stated that, running at 14Gbps, a 384-bit bus would deliver 672GB/s of memory bandwith, while SK Hynix has claimed its 16Gbps memory could hit 768GB/s. 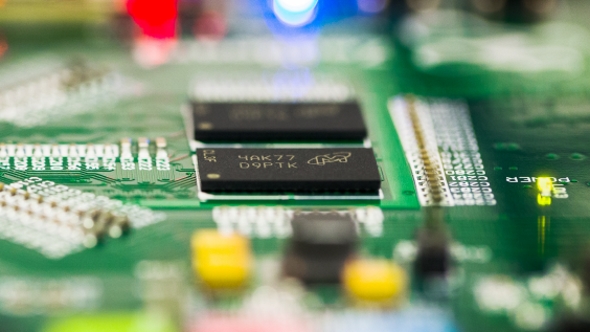 There is also evidence of an NVLink connection across the top of the PCB, though standard Quadro cards (and the Titan V) generally come with a pair of these connections. That could possibly indicate this is indeed a GeForce card rather than a professional tester board. There’s a lot of cooling over the power componentry of the card, with three 8-pin PCIe power connectors on evidence too.

Engineering boards are normally over-specced so I wouldn’t expect a final GTX 1180 card to arrive on the scene with that high a power requirement.

So, is this the first look at a GTX 1180? Sorry, no. The final next-gen GPUs will look nothing like this, aside from the big fat GPU in the middle (seriously, look at the space allocated to that slab of graphics silicon) and the GDDR6 arrayed around the outside of it. We don’t even know what they’re going to be called – will they even be GTX 1180 cards, or GTX 2080?

There has been the suggestion that Nvidia is teasing the architecture naming scheme of the next-gen cards however, though it could be trolling us and/or genuinely just be wishing Alan Turing a happy posthumous birthday….