The Nvidia RTX 2080 Ti is quite a card. It’s an ultra-expensive, ultra-enthusiast GPU built for 4K gaming and smashes every other consumer graphics card in any benchmark you care to throw its way. It’s also quite an overclocker, as evidenced by the world record 3DMark Time Spy score pro-overclocker Kingpin has managed to squeeze out of his RTX 2080 Ti.

Of course the 2,415MHz clock speed that he’s hit with his card is beyond the level that any of us could achieve on a day-to-day basis with our gaming rigs, not unless we had an unlimited supply of liquid nitrogen and a pet monkey trained to keep topping up the cold stuff while we game.

But the fact that Kingpin has managed to hit a 3DMark Time Spy score of 18,892 – around 2,000 higher than the closest Titan V benchmark – is mighty impressive, and just shows what a monster this card is. To all intents and purposes the RTX 2080 Ti is the Turing Titan in all but name, with the gaming performance to match. And that’s even without any of the ray tracing bells or AI whistles being yet available.

To be fair, the reported overclock isn’t just down to the graphics card, Kingpin also has a monster overclocking rig to back up his overall GPU overclock. There’s an Intel Core i9 7980XE, running at 5.7GHz, with 32GB on one of EVGA’s X299 motherboards. As well as the 2,415MHz GPU clock speed he’s also pushed the GDDR6 memory clocks up a fair way too – our Founders Edition RTX 2080 Ti runs its memory at 7,000MHz as standard, while Kingpin’s got his up to 8,658MHz. 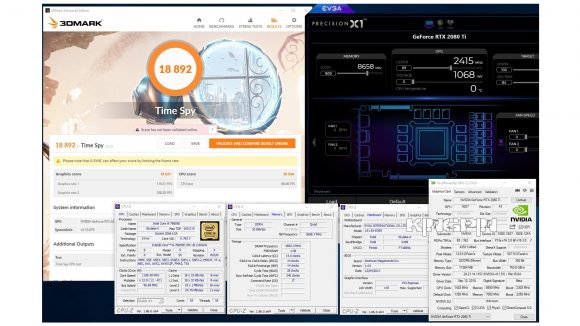 3DMark’s database seems mildly at odds with the reported GPU and CPU speeds, but there is one thing they both agree on – that top-end Time Spy score. 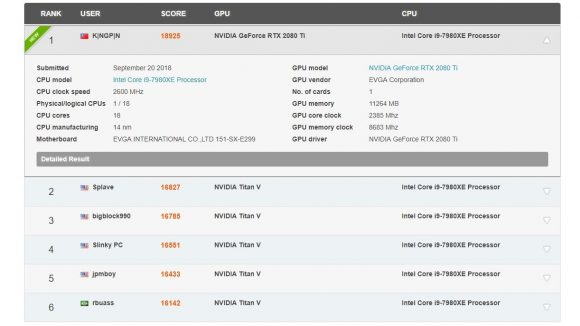 He’s also done some voltage modifications to get the card to push its GPU quite so high too. In short this is no vanilla card plucked from the shelves of your local store.

But it’s no mean performer on its own. The new NVScanner integration means that overclocking of Nvidia graphics cards is easier than ever, on both the 10- and 20-series GPUs. It’s a one-click system which tests the voltage curve using the same arithmetic tests that Nvidia’s engineers use to test a card’s limits. 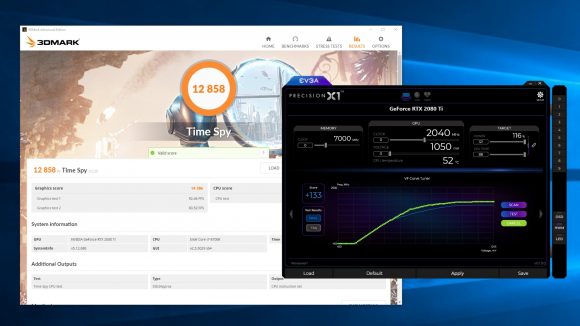 It launches a separate thread to test the voltage/frequency curve of your specific GPU, upping the frequency until it fails, then tries again with higher voltage settings. And it only takes around 20 minutes to find the sweet spot for overclocking. It’s hassle-free and allows you to squeeze the most out of your graphics card.

We got our RTX 2080 up to around 2,100MHz using the latest version of the EVGA PrecisionX tool, and that gave us a 3DMark Time Spy score of 10,496. That’s almost 1,400 more marks than the standard Founders Edition clock speed will net you. And with our RTX 2080 Ti the one-touch overclock netted us a Time Spy score of 12,848. Now, compared with the 12,401 at its stock, already overclocked settings, that’s not exactly a great performance boost, but our card was still clocked over the 2GHz mark.