August 31, 2018 We’ve updated the piece to include our own Battlefield V footage with real-time ray tracing on the RTX 2080 Ti.

Nvidia has finally announced its new RTX 20-series graphics cards, with the RTX 2080 Ti taking pride of place at the head of the new family. The new Turing GPUs are all about the potential of adding real-time ray tracing into our PC games, but how well can the new gaming GPUs handle the demands of ray tracing? We’ve done some early testing…

The new GPU architecture has been designed to support Nvidia’s RTX suite of hardware and software algorithms to help generate ray tracing on the fly, hence the switch from the GTX nomenclature to the RTX prefix. This is also build on the work the company has done with Microsoft to get its DirectX Ray tracing (DXR) into games too.

The RTX 2080 Ti is due for release on September 20 this year, costing the princely sum of $999. This is an ultra-enthusiast graphics card and the fastest GeForce GPU you can jam into your home PC. It’s also your best bet for getting the most out of the 21 new and updated titles set to support Nvidia’s RTX technology over the coming months.

So, how well does it handle the rigours of real-time ray tracing?

The impressive on-stage demos are one thing, but we had the chance to get up close and personal with two of the biggest upcoming games to support RTX: Shadow of the Tomb Raider and Battlefield 5, both played on the new Nvidia RTX 2080 Ti. 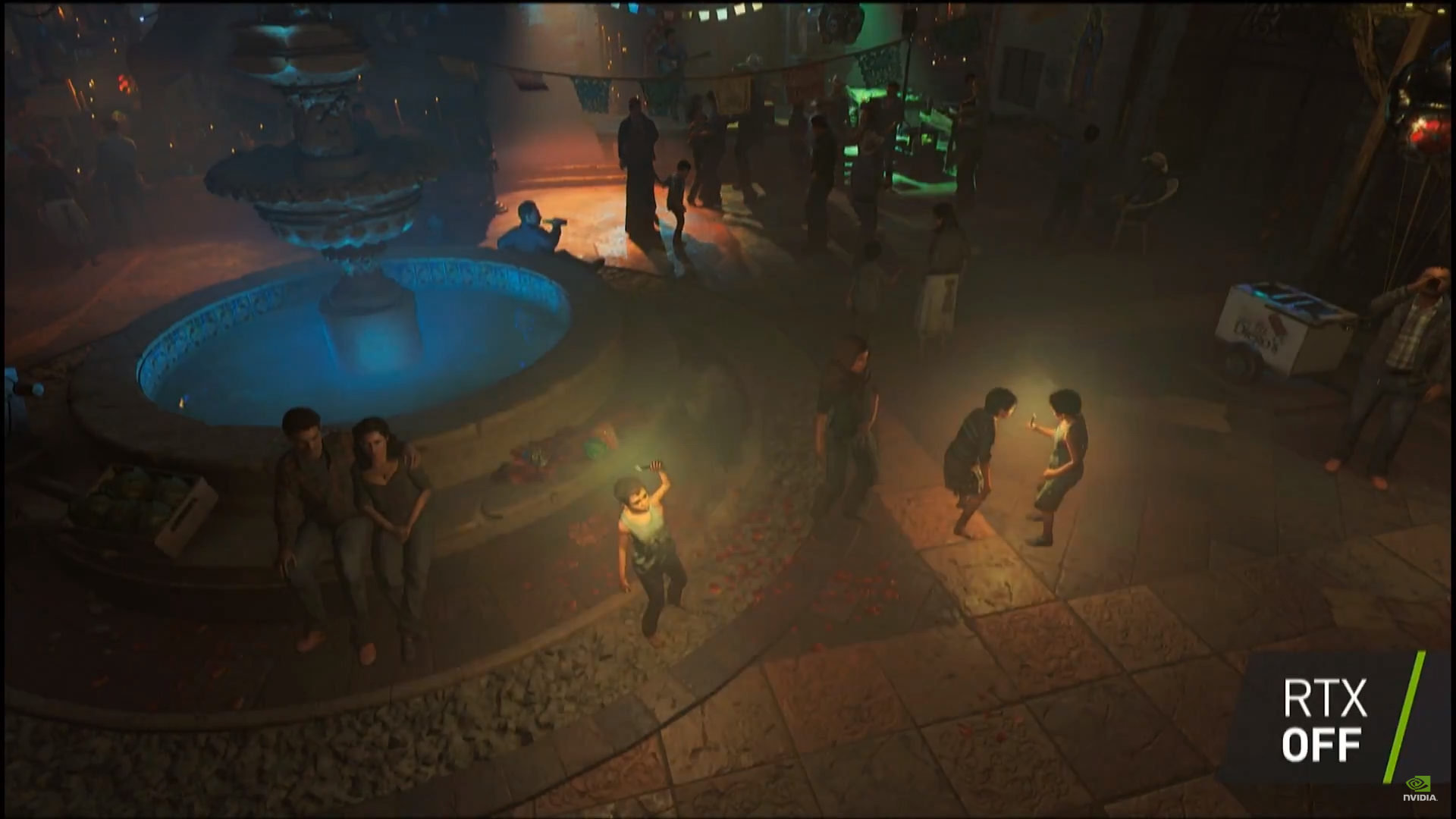 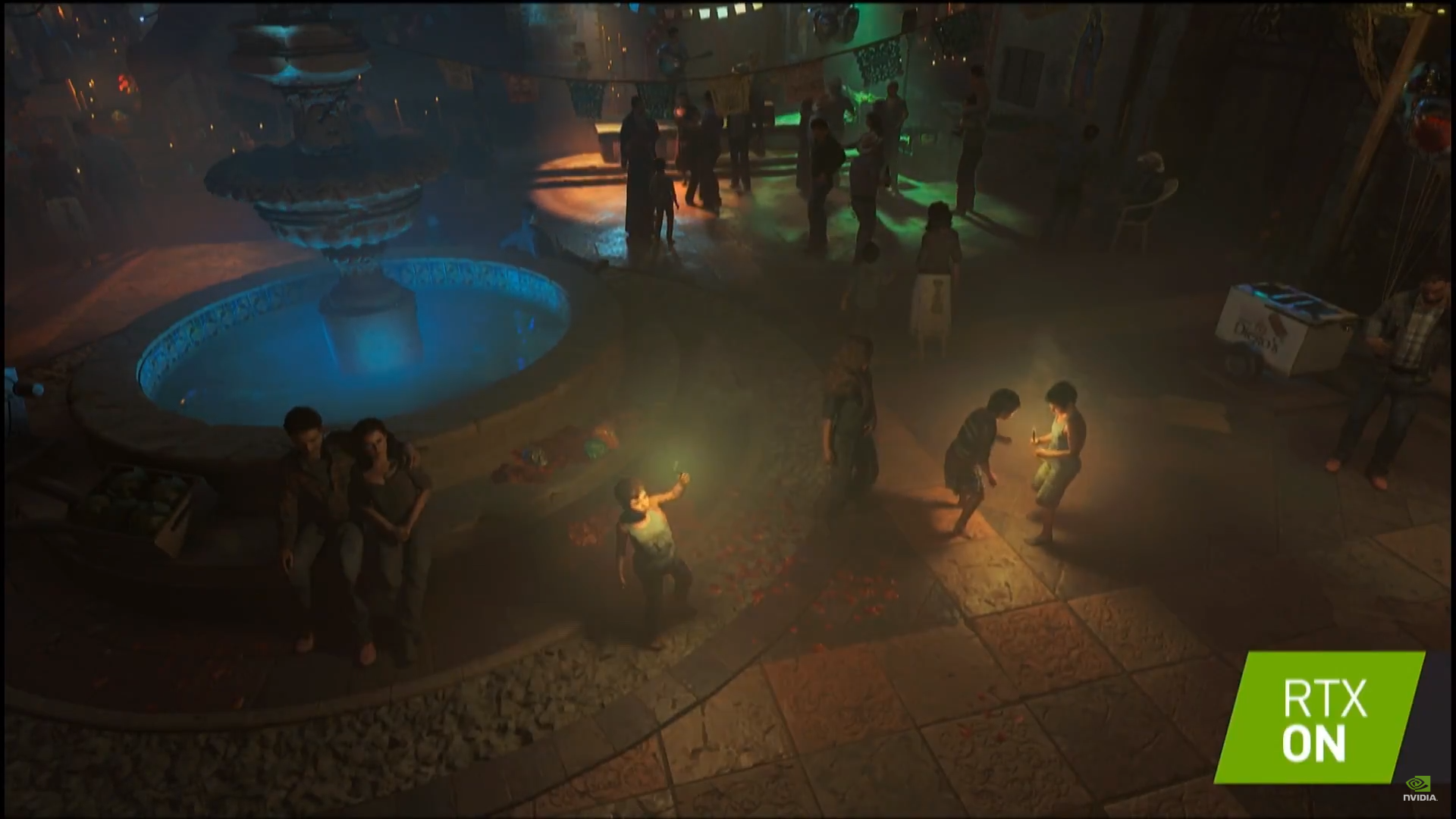 The first thing that does need to be said, however, is that we were obviously playing early versions of the RTX builds of both games, and with relatively early drivers for the RTX 2080 Ti graphics card too.

It’s tough not to be concerned when the ultra expensive, ultra enthusiast RTX 2080 Ti isn’t able to hit 60fps at 1080p settings

So the performance we were seeing from the cards and the RTX versions of Shadow of the Tomb Raider and Battlefield 5 aren’t necessarily 100% indicative of the performance that you might see when you get your thousand dollars worth of graphics card home and try and ray trace the fun out of your favourite new games.

But still, it’s tough not to be a little concerned when the ultra-expensive, ultra-enthusiast RTX 2080 Ti isn’t able to hit 60fps at 1080p in Shadow of the Tomb Raider. We weren’t able to see what settings the game was running at as the options screens were cut down in the build we were capturing, but GeForce Experience was capturing at the game resolution and the RTX footage we have is 1080p.

With the FPS counter on in GFE we could see the game batting between 33fps and 48fps as standard throughout our playthrough and that highlights just how intensive real-time ray tracing can be on the new GeForce hardware. We were playing on an external, day-time level, though with lots of moving parts and lots of intersecting shadows. 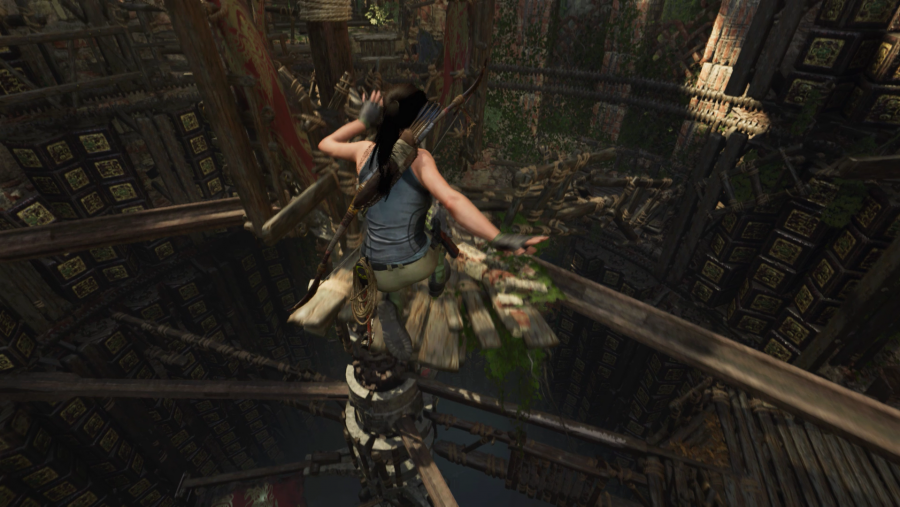 Though there weren’t any distinct area lights, the likes of which we saw in the seriously impressive on-stange Tomb Raider demo, it was using a single light source – the sun – and used that to create all the ray traced shadowing in the gameworld.

While the shadows in my play-time did look pretty good, in that brightly lit instance it’s hard to see where they look that much better than the traditional way that shadows are faked in-game. And to enable the ray traced shadows you’re obviously having to pay a huge performance penalty for the privilege. 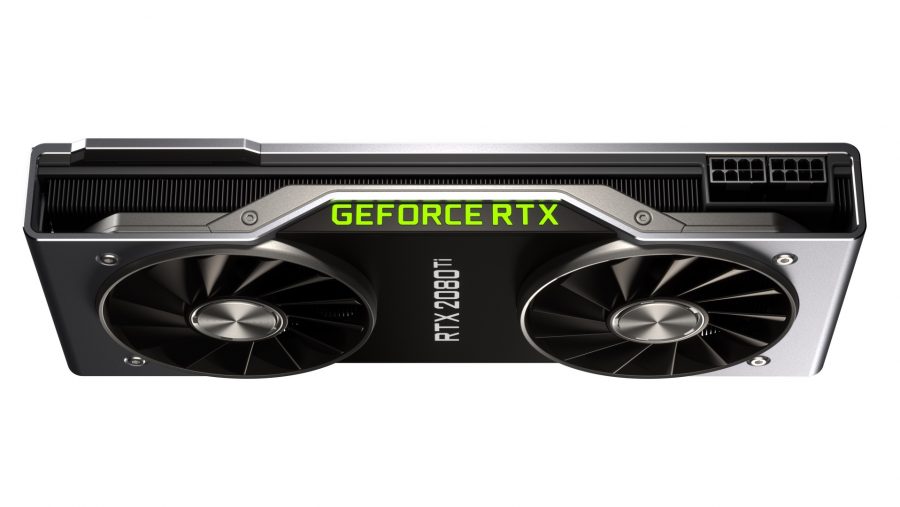 The difficulty is that the latest Tomb Raider looks great at 4K, with richly detailed textures; with your $999 graphics card do you really want to be playing games at 1080p any more? 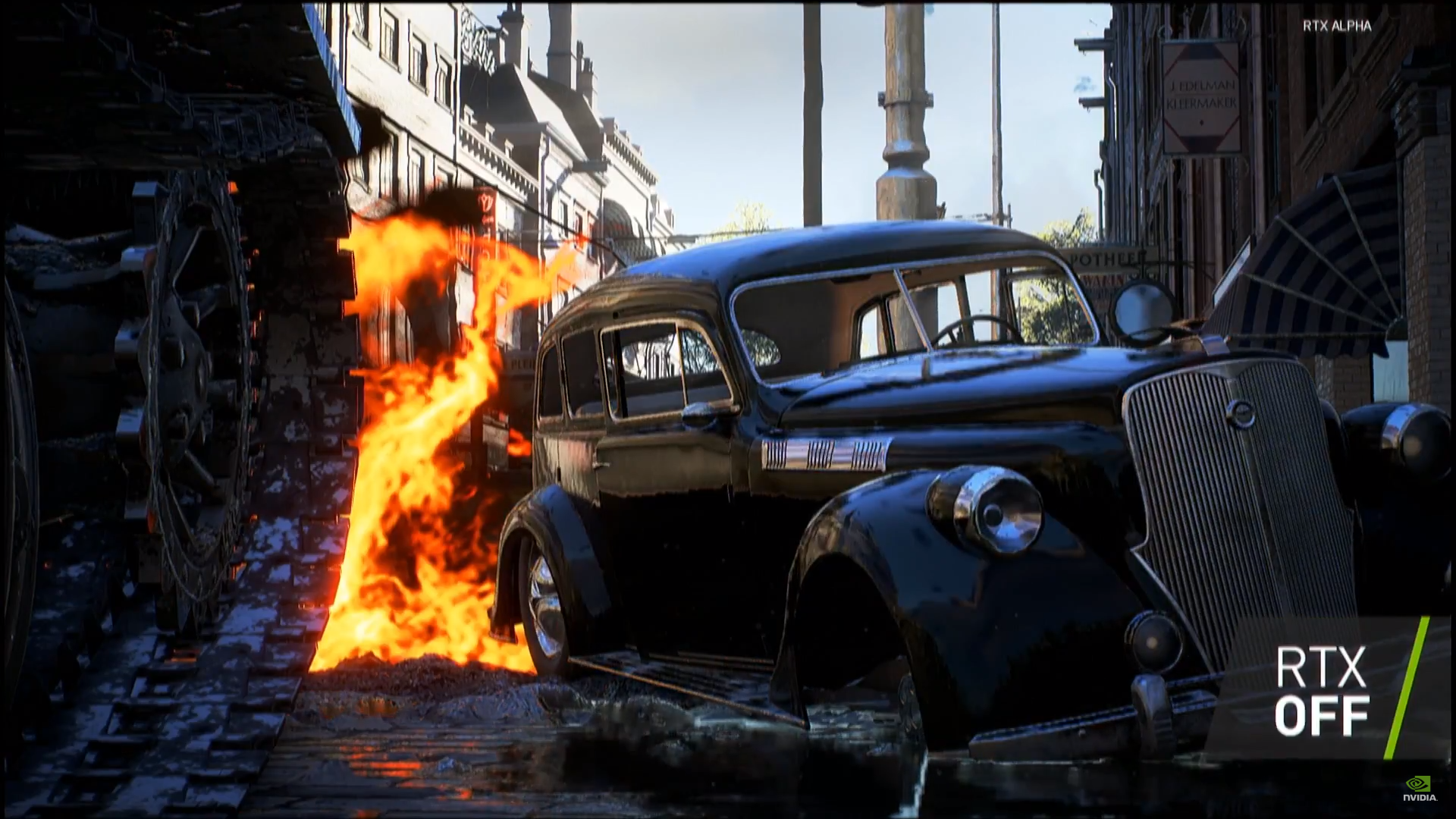 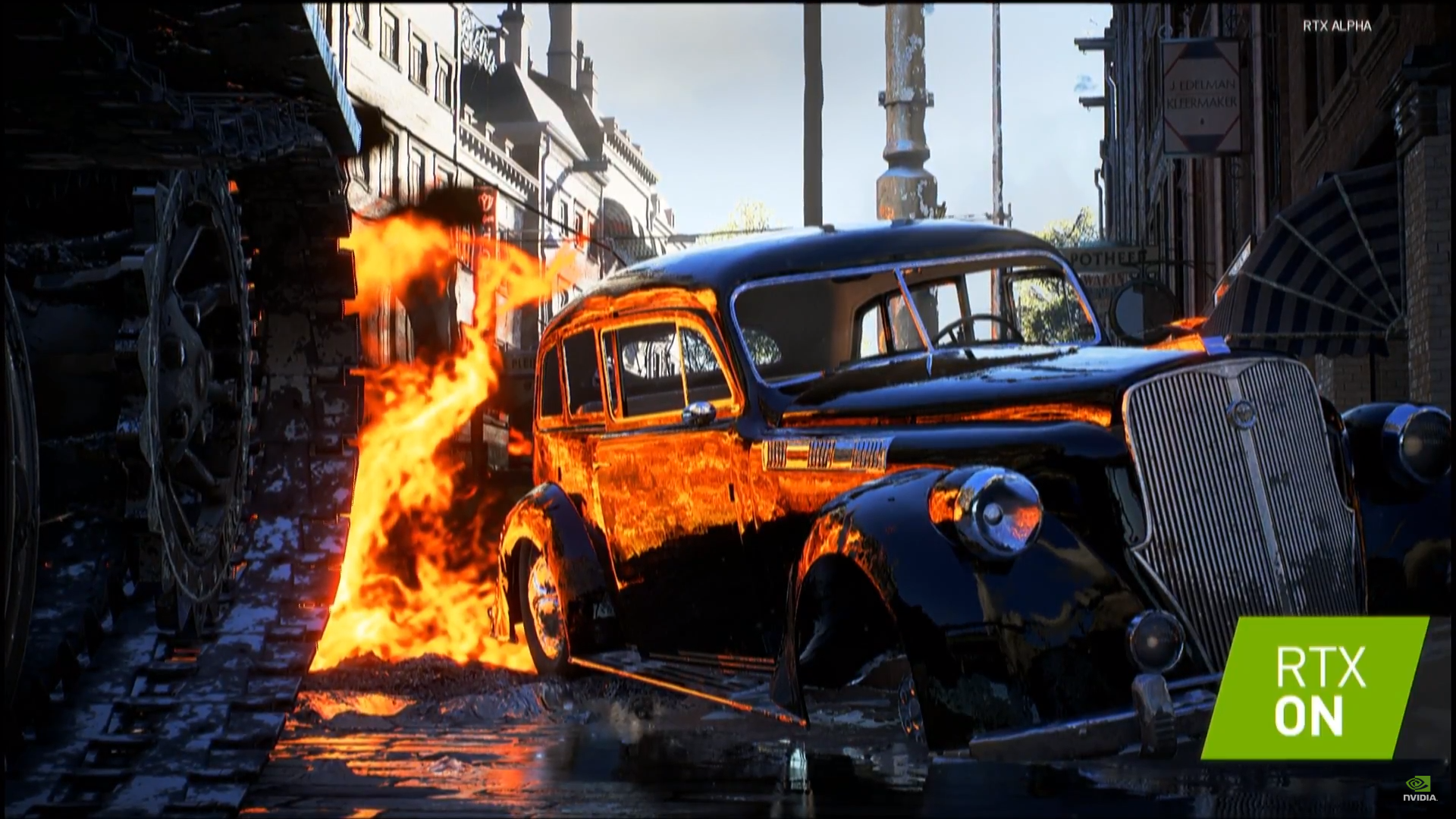 Playing the new Rotterdam map in Battlefield 5, however, was more convincing of how good real-time ray tracing can make a game look. There is a more tangible difference in the fidelity of the gameworld with the RTX reflections that DICE is using in its Nvidia-specific build of the new multiplayer shooter.

And everything has reflections. From the bonnets of cars reflecting the muzzle flash of your rifle, to the puddles on the floor, and the about-to-be-blown-out windows of a Dutch tram reflecting gouts of flame from a red-hot tank. The wooden stock of your gun has low level, ray traced reflections on it, hell, even the watery eyes of your soldier seems to.

Maybe you’ll be able to watch that reflected light go out as you slip a bayonet through their ribs, such is the attention to detail that DICE has thrown at this seeming labour of graphical love.

But of course there is still a hefty performance hit to the game. Again we were capturing the game resolution at 1080p and while we couldn’t bring the fps counter up in the show demo version, we’d bet it wasn’t hitting 60fps either. And in a competitive online shooter visual fidelity is arguably far less important than getting a high frame rate. And running at a higher resolution, without the ray traced reflections, would likely be preferable too as you could actually see more detail at range for those precision shots from downtown.

From a purely visual point of view, however, it’s hard not to be impressed with the fact that actual games released this year, on hardware that’s going to be available in less than a month, are going to have real-time ray tracing built into them. For a lifetime PC gaming nerd that’s super-exciting; as Jen-Hsun’s said, it’s long been the holy grail of PC graphics.

But it’s still just the first step. Even the most powerful gaming hardware on the planet is going to be brought to its knees by the performance demands of real-time ray tracing. But what we have seen so far is also just the early days of the tech – there will be a host of performance optimisations both Nvidia and the developers will work on over the coming months, but even then will people really want to be running games at sub-60fps at 1080p when they’ve spent a minimum of $499 on their new RTX graphics card?

For these first-gen RTX GPUs then real-time ray tracing looks more like a proof of concept than something that will become in any way mainstream this generation. But it does give us a tantalising glimpse as to what the future of all our gameworlds is going to look like. And they’re going to look stunning… once they can top 60fps at 1080p.