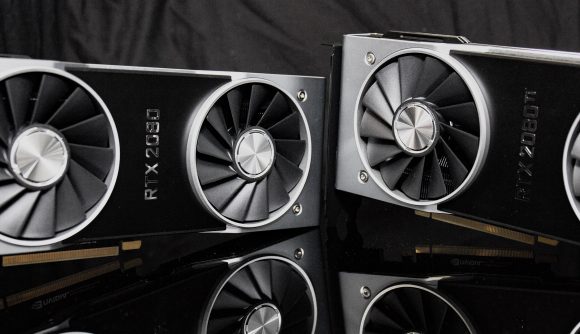 The new Nvidia Turing GPUs are bringing with them a new form of multi-GPU bridge for gaming, called NVLink. It’s an interface with many times the bandwidth of the old-school SLI connection, but it’s also much more.

At its most basic level the NVLink interconnect can be thought of as essentially the same as the old SLI connections on your graphics cards; you use a bridge to pair up two GPUs and they can then talk to each other and co-render games for increased performance. NVLink can still work that way, but only because Nvidia has made SLI work across the speedier bridge. Really it’s just a stepping stone to a future where multi-GPU gaming is actually genuinely desirable and not just occasionally powerful but mostly frustrating, as it is right now.

But just because it’s on a speedier bridge does not mean SLI games will be any faster across NVLink, however. “And the reason,” Nvidia’s technical marketing director, Tom Petersen told me recently, “is because if you’re running at a resolution and a refresh rate that works over the old bridge, then that’s already doing a very good job of offloading traffic from PCIe and putting it across the bridge.

“Now it is true that we might be able to do slightly better on some games, maybe reducing a little bit of the frame time because we have a bigger, badder link, but I think it’s going to be small.” 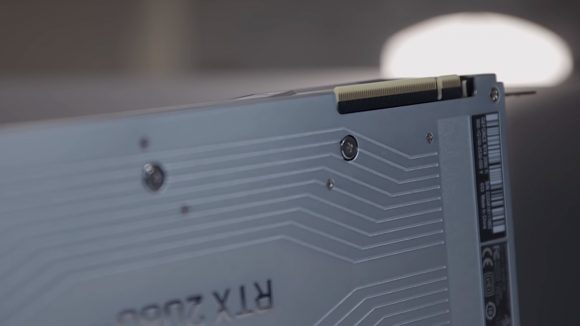 But a gaming speed-bump right now isn’t what NVLink is about. It’s about not having to change the PCB from the RTX Quadro cards and leaving the professional-class NVLink connectors in place, says the deep-seated cynic. For the optimist, however, it’s also about creating the infrastructure to move on multi-GPU compute and gaming performance in the future.

“Think of the bridge more as we want to lay a foundation for the future,” Petersen explains, “and that requires us to move the infrastructure along. So we already have a multi-GPU application called SLI, why don’t we just make that work on a really high-bandwidth bridge bus? And once that works, and we get our bridges deployed, and people understanding that hey, this is a 100GB/s bridge, then game developers will see that.” 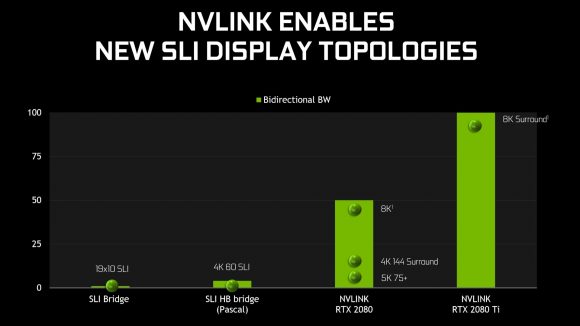 Getting SLI functional across NVLink is only the start, and mostly because it’s not really going to push SLI and its alternate frame rendering (AFR) technique any further along. There needs to be something else created which allows game developers to take advantage of the massively increased bandwidth of NVLink, but also take advantage of the fact that it’s a peer-to-peer interface.

Essentially, the GPUs are much closer together now, and that will allow game developers to actually see the NVLink connection and use it to render their games, hopefully in a more elegant, repeatable way than with SLI.

“That bridge is visible to games, that means that maybe there’s going to be an app that looks at one GPU and looks at another GPU and does something else.” explains Petersen. “The problem with multi-GPU computing is that the latency from one GPU to another is far away. It’s got to go across PCIe, it’s got to go through memory, it’s a real long distance from a transaction perspective.

“NVLink fixes all that. So NVLink brings the latency of a GPU-to-GPU transfer way down. So it’s not just a bandwidth thing, it’s how close is that GPU’s memory to me. That GPU that’s across the link… I can kind of think about that as my brother rather than a distant relative.” 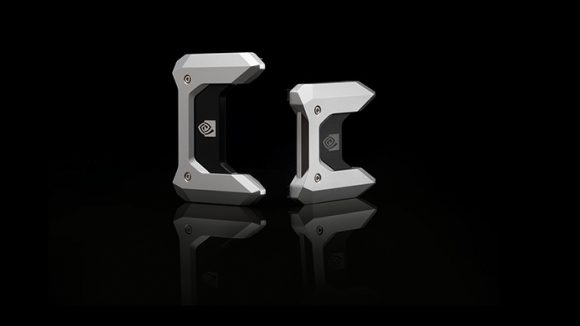 SLI has to use the alternate frame rendering technique because there’s too much space between the GPUs in question for them to really work together, they more or less had to take it in turns.

“SLI uses AFR and that is kind of segmented because it was built at a time when GPUs were far away,” says Petersen. “What NVLink does is create the opportunity for new types of compute. That new type of computing could be cooperative – two GPUs working on similar workloads – or maybe it could be a pipeline where one GPU does the first part of the frame, the second GPU does a later part of the frame. Maybe it’s pre-processing or post-processing. When the GPUs are closer together you can start thinking about really different of processing things.”

So while NVLink may not actually deliver us any greater multi-GPU gaming performance in the short term there’s a high chance a new method of linking up our graphics cards for the greater good is only around the corner.