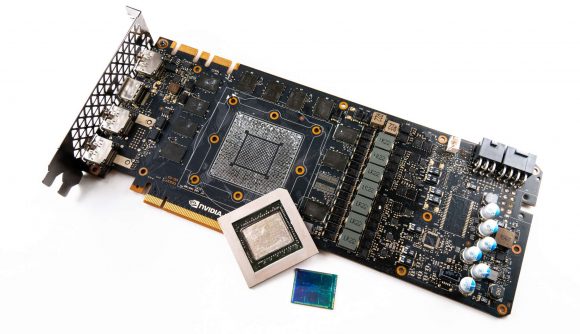 April 30, 2019 Updated to include details of the driver hotfix.

Nvidia’s last driver release, version 430.39, included a CPU loading issue baked into the code. Users reported the Nvidia Container part of the driver is using up between 10 and 20% CPU capacity. There were some workarounds to use if you were suffering from high CPU load, but Nvidia located the issue, tested over the weekend and has now released the hotfix: GeForce Hotfix Driver 430.53.

The Nvidia software team isolated the nvdisplay.container.exe issue, meaning you no longer have to delve into your files and start deleting folders… Not only that but they fixed a few other Nvidia driver bugs too.

But what was the offending file itself doing? The nvdisplay.container executable is part of Nvidia’s telemetry gathering schtick, and even if you opted to install just the display driver only with version 430.39 the software will still create the offending files and folders and potentially jam up your CPU. There’s a good chance you won’t have noticed any issues if you don’t routinely nose about in Task Manager, but if you noticed your CPU fans whirring up more regularly, Nvidia’s drivers might well have been the culprit.

The Nvidia driver hotfix, version 430.53 can now be downloaded from the support pages of the company website. The hotfix should take care of the high CPU load problem, also fixing some flickering in 3DMark as well as in some situations using multiple monitors.

And if your still indulging in Lara’s latest murderous rampage, Shadow of the Tomb Raider, it won’t freeze now with an SLI setup. Surely the Venn diagram intersect of continuing SoTR players and people still running SLI systems has got to be as thin the PCB Nvidia mounts its GPUs onto…

Next-gen: All the key players in the push for quantum computing

The original issue was reported on Reddit and on the Nvidia forums themselves. After struggling to identify the issue originally Nvidia’s software bods have nailed it down and are working the kinks out of the drivers as I type.

But, by deleting a couple of subfolders in the main Nvidia folder, users reported the issue could be solved. The process would still run, allowing your machine to run as normal, but the high CPU usage should be fixed.

You could have always just used Display Driver Uninstaller to remove the current install and roll back to a previous driver release if you’re not comfortable deleting files ‘cos we say so, but now there’s an official hotfix so we’re all good.