If you’ve tried to pick up the best graphics card from Nvidia or AMD, you won’t be a stranger to current stock issues. But before you resort to purchasing a GPU that’s being resold at a massively overinflated price tag, grumbling at what some are criticising as ‘paper launches’, you might want to pause for a second because some listings online quite literally are paper launches.

If you’ve been searching for hours on end and finally come across a reasonably-priced graphics card, it’s easy to get excited and rush to the bidding screen, but you’ve probably heard of the saying ‘if it’s too good to be true, it probably is’, and this is no exception. Some listings sneakily mention that you’re not spending triple figures on a shiny new graphics card, but rather a plastic replacement, a low resolution A4 print out, or even just an online jpeg in your inbox.

The intention isn’t as malicious as it sounds, however, instead trying to catch out scalper bots rather than the innocent shopper. But with clarification like “this is a photo of the card, not the card – do not buy unless you are a bot” sometimes being too far buried in the description, it’s not exactly a perfect system.

Although it sounds nice to imagine this as some sort of fightback against the bots, there are some who’ve made the mistake of actually purchasing one – after all, humans are more likely to make mistakes than an algorithm which has undoubtedly been designed not to purchase these misleading listings, anyway.

Here is one of several listings we’ve found on Ebay that simply peddle photos of the graphics cards. At the very least, this one says “no humans” at the end of the title so it’s slightly easier to see at a glance, but negative feedback shows that a buyer was caught out and given photos of an RTX 3080 when they thought they were buying the real thing – at a cost of £1,800 ($2,500), too. 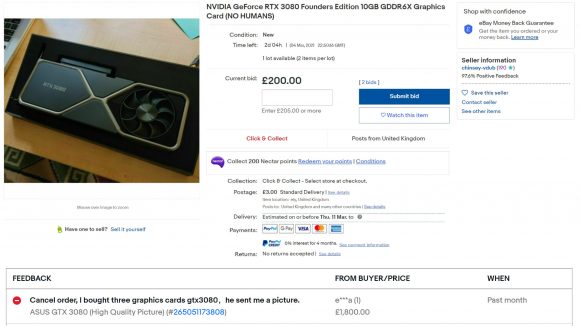 This isn’t exactly a new concept, with Ebay sellers originally putting up toilet rolls and other absurd items up under the RTX 3080 name when it first released in September last year. Since these listings aren’t quite as obvious, though, just be very careful looking at what you’re buying online.