Over the weekend the interweb pitchforks came out again for Nvidia, with the PCMR subreddit flashing incandescent with rage over a part of Nvidia’s GeForce Experience application which was accused of spying on us and our gaming rigs.

The consternation stems from an Nvidia Telemetry Monitor which exists in the Windows Task Scheduler and has reportedly been included with current revisions of the GeForce Experience software. Concerned citizens of the PCMR are worried that now GFE requires a specific login (as of the GFE 3.0 update) any data Nvidia is collecting can now be used in conjunction with their account information to divulge personal details with anyone it chooses. Like the NSA. Because they really do care how long you’ve spent playing Civilization VI – unsurprisingly that’s their most effective way of tracking down prospective tin-pot dictators and inhuming them.

The monitor activates at login and checks, in real time, the hardware installed in your machine, its specifications (including any clockspeed tinkering), the driver and game settings you are using and the games you play and have installed. 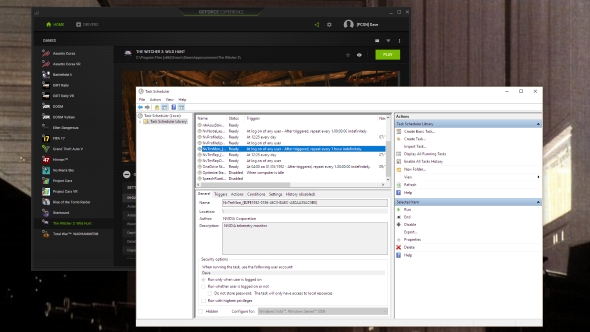 We reached out to Nvidia for an explanation of what they were doing with the data and they reiterated their official statement on the matter:

All of this information is included in the EULA and the FAQ posted on GeForce.com.

So, none of this is new, GFE has always been stealing your data and selling it to the highest bidder. Except now it’s flogging real-time data. Really? Really?

Well, as it turns out, no. GamersNexus have analysed the packet data of a machine running the Nvidia Telemetry Monitor to find out what it’s collecting and where it’s sending the information. And it seems Nvidia really aren’t collecting any personally identifiable data for the use of government agencies; once it’s grabbed your hardware info the monitor is mostly just calling home and collecting pretty pictures of box art to populate the app. Or maybe Nvidia are just very good at hiding the terrible stuff it’s doing (shout out to my conspiracy theorist homies).

It all seems like a bit of a non-story to me. Nvidia doesn’t seem to be doing anything particularly nefarious, and certainly little more than Valve is collecting about your gaming habits via Steam. The collation of hardware and software settings, as well as what games are installed and how often they’re played, makes utter sense in terms of Nvidia making GFE a better service for their users.

Of course they’re also going to take ‘aggregate-level’ information (non personally identifiable data) and share/sell it to advertisers or publishers, but that happens on practically every retail site you’ve ever used online.

I can understand why needing a login for GFE, when you previously didn’t, is a royal pain in the posterior, but as of right now it doesn’t seem like a backdoor method of gathering valuable data specifically about you. But if you’re still concerned for your privacy you could always follow Major Geeks’ advice on how to put a halt to the telemetry monitor or just not use GeForce Experience.