Palit has released a new silent model of Nvidia GeForce GTX 1650. It’s calling its new, small, ITX graphics card the 1650 ‘KalmX,’ and for good reason. It’s said to run at 0dB as it only requires passive cooling – in other words, no fans – and marks the first model of GTX 1650 to be released that relies on case cooling alone. Its quietness might make you ten times calmer… maybe that’s what it was going for with ‘KalmX.’

It also claims the GTX 1650 KalmX (via Tech Power Up) will “give you the gaming horsepower to take on today’s most demanding titles in full 1080p [email protected] FPS.” The obvious concern with combining supposed high performance with no fans is the heat such a combination might cause, which would also limit performance.

To combat this concern it’s gone for a cooling solution that involves two nickel heat pipes and a many-finned nickel heatsink sitting atop a copper base for increased thermal conductivity. Its TDP is rated at 75W, meaning it’s a GPU that shouldn’t run too hot, and its recommended power draw is 300W, so you won’t need a high wattage power supply to run this thing, either.

Because this card uses the 1650’s reference design, it won’t get you the frame rates of the ‘Super’ models or the best graphics cards going, but it should still perform well in most games at 1080p, sitting somewhere between Nvidia’s GTX 1050 and AMD’s RX 570. The specs are as follows:

While the GTX 1650 has the lowest specs of current generation AMD and Nvidia cards, it is also one of the cheapest. However, in terms of its price-performance ratio, it’s not too great either – our money remains on the RX 570 right now. But this particular model is clearly targeted not at those who want the best-performing card for the price, but at those who want either a small card, or a quiet one, or both. 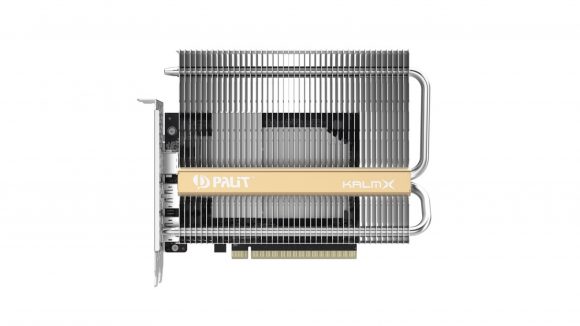 This GTX 1650 is powered solely by the PCIe slot that it sits in, meaning no external power is required. This complements its small form factor ITX design, making it a GPU that is well-suited to smaller cases that perhaps might not be able to fit too many cables (or users that maybe hate cable management just that much).

So, Palit’s GeForce GTX 1650 KalmX is small, quiet, and boasts a thermal design that should keep it running cool despite its lack of fans. Whether you’re after the ‘Kalmness’ its fanless passive cooling provides, or the extra space you’ll get from its small size and lack of external power requirements, Palit has you covered.