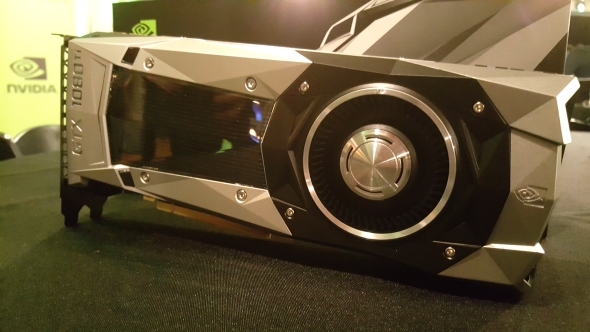 Nvidia have finally officially announced what is probably the final Pascal GPU – the GeForce GTX 1080 Ti. Or, as I like to call it, the Titan-killer. We’ve been waiting for the green team to drop the consumer-level version of the latest Titan X since its big brother came out, but Nvidia choose to make their announcement just down the road from where AMD had been making more noises about their Radeon RX Vega GPUs.

Don’t want to wait? Check out our pick of the best graphics cards to buy right now.

Nvidia are talking about this as the fastest Ti version of a card they’ve ever released and they’re not messing around. In one fell swoop they’ve effectively rendered Pascal’s Titan X almost entirely irrelevant, and potentially upset the five people who were able to buy one in the first place.

That’s because the GPU inside the new GTX 1080 Ti is barely any different from the superpowered GP102 in the Titan X. With previous Titan-related Ti cards Nvidia have taken a chunk of logic out of the GPU to differentiate between the two, but both the Titan X and GTX 1080 Ti have the same 3,584 CUDA core GPU.

Nvidia are also promising that you’ll be able to top 2GHz too with some healthy overclocking headroom. They’ve strapped a new vapour chamber cooler to the Founders Edition card too, with twice the which promises to either give you cooler performance for the same dB level or quieter performance at the same chilled operation. 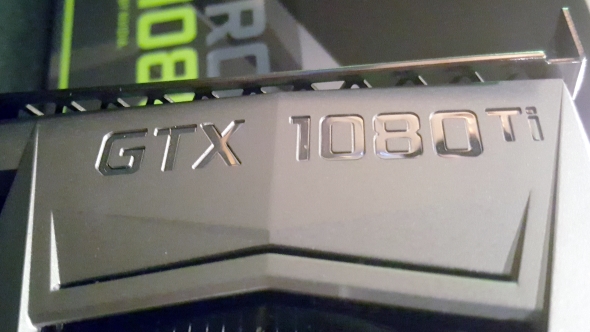 They’ve also given it the fastest GDDR5X memory in the world, with the 11GB of video memory running at a frankly ludicrous 11Gbps. How very Spinal Tap.

So, it’s got one gigabyte less of video memory, utilising an aggregated 352-bit memory bus, but with it sporting 484Gbps of bandwidth that’s unlikely to matter one jot. The new GDDR5X memory has been supplied by Micron and has been improved to minimise noise and optimise its performance. If you tried to run the previous GDDR5X memory at 11Gbps it would suffer a whole load of data corruption but with the new Micron design it’s going to be plain sailing. 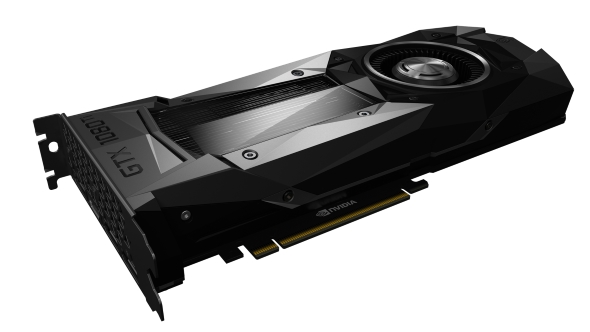 Priced at $699 it’s much less expensive than the beleaguered Titan X and, though still not exactly cheap, is a lot more reasonable than we expected. Although Nvidia are releasing their Founders Edition card first, it’s still not going to come with a huge price premium over vendor boards this time. They’re sticking their Founders Ed at the same MSRP the partner boards will be rocking when they follow shortly after the GTX 1080 Ti’s launch next week.

Our Founders Edition of the GTX 1080 Ti should be winging its way to the PCGamesN office as I type this so we’ll have performance numbers for you soon. Now I’m really looking forward to getting home from GDC what with some AMD Ryzen CPUs, AM4 motherboards and now a brand new high-end Nvidia card to play with too. There’s a whole lot of exciting new technology coming out right now.