Nvidia has concluded the biggest deal in its history: a whopping $6.9bn purchase of Mellanox Technologies. Peaking Nvidia’s interest, Mellanox builds networking tech for the data centre – and business is booming. Its share price has surged nearly 150% since the beginning of 2018, recently energised by rumours of an Nvidia or Intel buyout.

The deal, now reportedly finalised and to be completed by the end of 2019, would have Nvidia consolidate its position in the data centre market. Despite many attempts to become a data centre-first company in recent years with its “the more you buy, the more you save” spiel, it still milks more moolah from the gaming side of the business than the corporate computing world. You can’t get rid of us that easily, Jen-Hsun.

But, as always in big business, if you can’t pull yourself up by your bootstraps, use your considerable fiscal clout to buy your way in the door. First floated by anonymous sources close to the matter, the deal has been concluded with Nvidia outbidding Intel for networking darling Mellanox, currently valued at $5.93bn.

Headquartered in California and Israel, Mellanox specialises in ethernet network adapters and interconnect technologies that aid companies in scaling, virtualisation, and reducing costs of data centres.

Get gaming: These are the best graphics cards in 2019

With the growing interest in GPU-powered server racks, AI and machine learning compute performance, and its own NVLink / NVSwitch technology, Nvidia would be able to offer end-to-end server solutions.

NVLink is an interconnect fabric technology with the potential to minimise bottlenecks from PCIe on multi-GPU systems. Nvidia utilises it within the HGX-2, a 16 GPU AI and HPC system it dubs “the world’s largest GPU.” 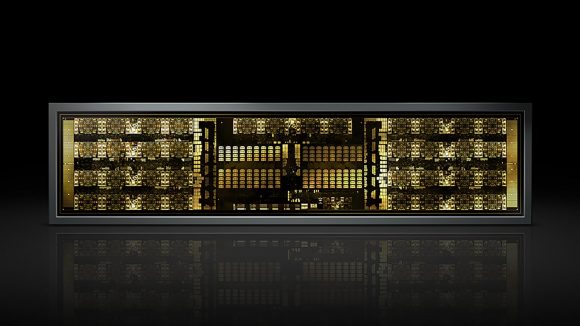 And, for the first time with Nvidia’s Turing GPUs, NVLink is available on GeForce graphics cards. The RTX 2080 Ti and RTX 2080 both feature an NVLink connection, although multi-GPU systems are still relatively obscure in the gaming world due to a lack of widespread dev support.

As is the case with many Silicon Valley companies, Nvidia’s history is one of many acquisitions. Some of the green team’s major acquisitions include: 3dfx, Ageia, ULI Electronics, Hybrid Graphics, Icera and PGI. No stranger to buying an advantage, the Mellanox purchase is the largest acquisition by the company at $6.9bn – $125 per share.