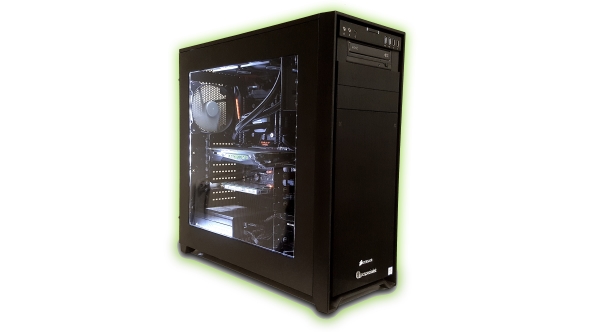 Nvidia have just launched the new UK base specs for their next generation of GeForce GTX Battlebox PCs and they’re no longer just giving their seal of gaming approval to Intel CPUs, they’ve got AMD’s Ryzen chips in mind too.

There’s a real battle going down in processor-world right now, so if you want to know who’s on top check out our guide to the best gaming CPUs.

The basic idea behind Nvidia’s original Battlebox promotion was to work with system builders to create an Nvidia-supported spec for machines built around their graphics cards. If a gaming rig’s got the Battlebox badge then it’s an GeForce-approved spec, or at least that’s the thinking.

Realistically the Battlebox name just got dropped on whatever high-spec, GeForce-powered rig a PC builder created. Today though Nvidia are introducing two new minimum spec tiers of Battlebox, the GeForce GTX Battlebox Ultimate and the GeForce GTX Battlebox Essential. The first has to have a GTX 1080 Ti to count and the second needs the 6GB version of their GTX 1060 to get the badge, and they both must come with an SSD too.

The interesting part of this is that Nvidia are essentially now recommending AMD Ryzen 5 or Ryzen 7 processors alongside their Intel Core i5 or Core i7 rivals for their gaming-focused machines.

Nvidia lists the two tiers as one for VR or 4K gaming and the lower-spec rig as the go-to gaming PC for 60fps at 1080p in the most popular multiplayer titles.

GeForce GTX Battlebox Ultimate – get battle-ready with the ultimate gaming machine, whether you’re a first-person marksman or an eSports professional. Batttlebox Ultimate combines the extreme power of a GeForce GTX graphics card with the latest high-performance hardware to bring you an incredible experience – every time. Gear up and play like the pros. Battlebox Ultimate is perfect for those looking for VR Ready rigs or wanting to enjoy games in stunning 4K.