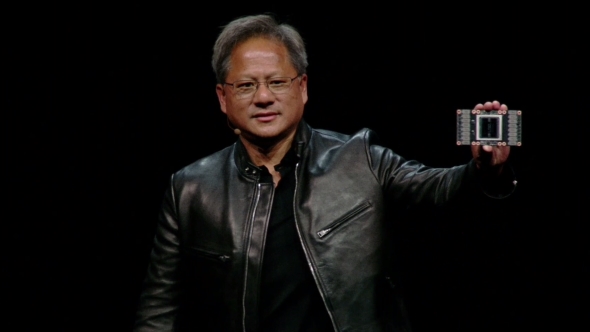 Cryptocurrency mining on the GPU is here to stay, at least that’s the view of Nvidia’s CEO, Jen-Hsun Huang. And he reckons that they’ve got a better chance of dealing with that growing market than its competitors, AMD.

What’s the best graphics card  to buy right now? Allow us to elucidate.

The recent resurgence in the mining of cryptocurrency, using off-the-shelf GPUs, has lead to both a huge shortfall in the number of available graphics cards and a steep rise in their pricing too. As ever, the former begets the latter.

It’s a perfect storm at the moment, with both component price rises and GPU shortages driving graphics card prices ever higher. The new AMD Radeon RX Vega 64 sold out within a couple of hours, for example, and that’s not even really showing it’s mining chops yet.

This is, however, most obvious on the AMD Radeon side of the graphics divide. The Polaris-based 400 and 500-series GPUs were the perfect mix of performance and power, specifically for the rise of ethereum as a cryptocurrency you could mine with standard parts anyone could buy. And they did, in their droves.

Once stock of the Radeon cards had run dry the miners turned to Nvidia and, most especially, the GTX 1060. But the preference was always for AMD. That became evident when the first ethereum dive, and the increasing difficulty in mining the new currency, prompted a lot of miners to ditch their cards, leading to a huge surge in Radeon GPUs on the second-hand market. Most at the same ridiculous price they’d been bought at.

But, in a recent Nvidia investors call, Huang pointed to this volatility in the cryptomining market as the reason that they, as a company, are far better placed to deal with the future of cryptocurrencies than their smaller rivals.

“Cryptocurrency and blockchain is here to stay,” says Huang. “The market need for it is going to grow, and over time it will become quite large. It is very clear that new currencies will come to market, and it’s very clear that the GPU is just fantastic at cryptography.

“And the last thing that I can say is that the larger of a GPU company you are, the greater ability you could absorb the volatility. And because we have such large volumes, we have the ability to rock and roll with this market as it goes.”

So, while AMD might be the GPU of choice for the cryptocurrency market, Nvidia think their size means they’ll be able to react to the volatile demands of the miners quicker than AMD, and produce enough cards to fulfill the demands of both cryptography and gaming.

With cryptocurrencies then, Jen-Hsun thinks size really is everything.