We’ve been investigating, speculating and rumour-mongering about the low-priced new Pascal cards for a while now, but it’s taken until just a week before their worldwide release for Nvidia to officially announce the two new cards.

Both the GTX 1050 Ti and the slightly weaker GTX 1050 will be launching on the same day, Tuesday October 25, 2016, and will offer us our first taste of how the Pascal graphics architecture fares at the lower end of the gaming spectrum. We’re expecting performance to be around GTX 960 levels, and sit somewhere between the competing Radeon RX 460 and RX 470 GPUs.

AMD must be pretty confident their RX 470 has the measure of the new GTX 1050 Ti because they’re reportedly dropping the price of their second tier Polaris GPU to try and cannibalise sales that would have otherwise gone green. They’re not, however, going to be able to get as low as the $139 and $109 dollar price points Nvidia have setfor the GTX 1050 Ti and GTX 1050 respectively, and at the time of writing RX 470 prices are still sky-high.

However, with UK pricing starting at £139 and £115 for the new GeForce cards, it’s clear the current economic and cultural issues in Britain are taking their toll on the cost of upgrading our machines and not just on our Football Manager 2017 careers. A straight dollar conversion of the GTX 1050’s $109 price would make it an £89 GPU in the UK, but that is clearly not going to happen.

Nvidia aren’t pulling any of their Founders Edition shenanigans with the GTX 1050 Ti and GTX 1050 cards though, which is good news on the price front. Unfortunately it means that funky-looking shroud in the pic at the top of the page is just a render and never likely to be seen in the flesh. Shame.

The new Nvidia GP107 GPUs used for both GTX 1050 Ti and GTX 1050 are both brand new chips using a slightly different manufacturing process than the previous Pascal silicon. The new GPUs, as we reported back in August, are built on Samsung’s 14nm FinFET process rather than the TSMC 16nm FinFET design used for the rest of the range. Whether that adds any more efficiency to the GPU is up for debate, as is whether the difference between the 14nm and 16nm lithography is anything other than marketing numbers. 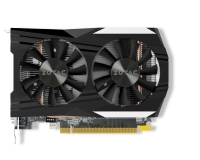 Still, the Pascal architecture is super-efficient anyway, building on the promises made by the previous generation of Maxwell chips, and with both new cards rocking a 75W TDP neither of them have to operate with additional PCIe power connectors. Both GTX 1050 Ti and GTX 1050 are able to run simply by supping juice from the motherboard connection itself.

For me, this is the most important part of the equation for Nvidia’s new cards; it makes them as easy an upgrade as dropping in a new stick of memory. All you have to do is drop the card in a spare PCIe slot and you’re good to go for 60fps 1080p gaming at decent settings. It means any off-the-shelf PC can be almost-instantly turned into a gaming rig for a great price and as easy an upgrade as exists in PC gaming. 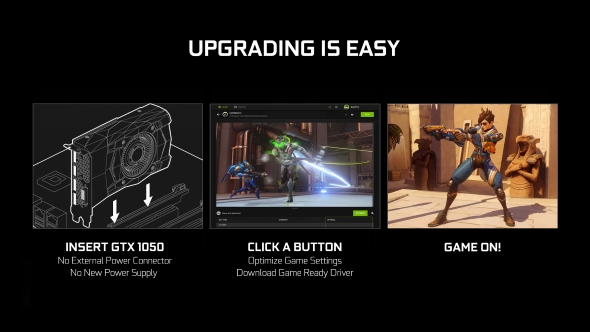 Unfortunately there will always be higher-priced, factory-overclcocked cards which will require additional power to aid their clockspeed boost and justify their price premium. The standard cards may still be pretty effective overclockers, but whether they can match the 2GHz clockspeeds Nvidia has touted for the OC versions is yet to be seen.

If anything, it’s these cards which are the real console killers. Right now Nvidia is estimating 52% of game developers list the PC as their lead platform – that’s around twice the number solely committing to either console. So, PC gaming is massive and growing and with relatively powerful hardware like this taking the cost and complexity issues out of the platform that trend can only continue.