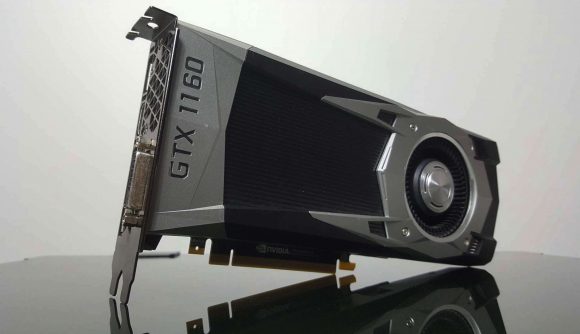 So, the Nvidia GTX 1160 just won’t quit, then, eh? This is getting stupid now. I was just about making peace with the whole GTX 1660/Ti bovine waste, and now Palit goes and throws out the GTX 1160 name again to really frack with us. Sorry, I really want to swear, but have just been re-watching BSG again.

Either Nvidia and its board partners are trying to drive the rumour-driven tech media mad with conflicting and contrasting leaks about different GPUs, or IQs suddenly dropped while I went away for Christmas. We’ve had what were being treated as stone cold leaks about names, specs, and release dates for both the GTX 1660 Ti and GTX 1660 – with even a little GTX 1650 teasing too – and now a brand new product notification list is suggesting that Palit is registering product codes for GTX 1160 cards as well as the aforementioned GTX 1660 Ti and GTX 1660.

These product lists are rarely simply a notification of all the different versions of a graphics card that a company is set to produce, more a list of the potential different SKUs that might arrive given a companies’ historical ranges. In a similar list before the launch of the RTX 2060 Gigabyte registered 39 different SKUs, with different memory configs, and has so far only released eight with just one kind of memory.

But the very fact that we’re seeing the GTX 1160 rear its head again is somewhat surprising given all the other rumours have been purely about this bizarrely named GTX 1660 pairing. The product notification list has been submitted to the Eurasian Economics Commission as of today, and I’ve got to think Palit would only be doing this if it knew such a GPU naming scheme was actually going to be used.

Read more: These are the best graphics cards to buy today

The further specs – memory capacities, overclocking, etc. – can be buried in those myriad submitted SKUs, but the name of the graphics card itself? Surely Palit isn’t just taking a punt at what it might be called.

But there it is, submitted for your pleasure, and potential confusion. If you have any idea what’s happening here answers on the back of a postcard to the usual address:

Who knows, and I’m maybe starting to get to the point where I’m struggling to care. It’s just all too confusing for a Friday afternoon, so I’m going to go and sleep off my standard lunchtime pint somewhere.