Nvidia have just unveiled the first official Volta GPU, the professional-level Tesla V100, and if you want one you’re going to have to fork out $3bn. That’s how much the R&D costs were and there aren’t too many available right now…

Can’t afford $3bn? Well, here’s our pick of the best graphics cards a normal bank account might be able to afford.

Nvidia CEO, Jen-Hsun Huang, presented the GPU on stage calling it a masterpiece. I mean he would, wouldn’t he? But it sure is one hell of an engineering feat and has been created “at the limits of photolithography,” explains Huang, “meaning you can’t make a chip any bigger than this because the transistors would fall on the ground.

“To make one chip work per 12-inch wafer, I would characterise it as ‘unlikely.’ So the fact that this is manufacturable is an incredible feat.” 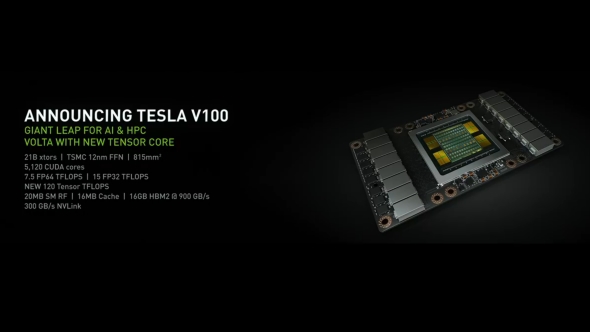 As well as the GPU itself Nvidia have packed it out with 16GB of second-gen high-bandwidth memory (HBM2) capable of delivering 900GB/s in memory bandwidth. That’s an impressive boost over the Pascal-based P100 GPU which still hit a staggering 732GB/s.

They’ve also nearly doubled the bandwidth over the first generation of their NVLink interconnect, hitting 300GB/s compared with 160GB/s for last-gen NVLink. That’s around ten times the bandwidth available to the latest PCI Express connections. Like with P100 Nvidia will also be shipping a PCIe-based version too.

Now obviously $3bn is a bit rich, so there are going to be cheaper versions than Jen-Hsun’s on-stage prototype available later in the year when volume of these massive GPUs has been increased. There’s a server box sporting eight V100 GPUs costing just $149,000, and one with four at around half that. Those will start shipping in Q3 of this year with full OEM availability of the V100-powered machines on sale in Q4.

So, what does that mean for us? Well, it means the pro-level Volta V100 GPU is unlikely to essentially be the same chip that drops into the GTX 2080 Ti, not at that size. And if Nvidia follow the same release cadence they followed with Pascal we won’t be seeing Volta GPUs in our PCs until May next year.

But that’s if Nvidia follow the same path, and there’s nothing to say they’re going to do that. We may still see little Volta’s this year. Maybe.