After two months of waiting, Rainbow Six Siege players can now enable Nvidia Reflex to reduce system latency and input lag by up to 30%, making shots easier to hit. All you need to do to unlock the feature is install the latest Game Ready Driver, download a small update, and boot the Vulkan version of the game.

It should be on by default if you have an Nvidia GPU, but there’s a boost option you can swap to in the display tab if you own a beefier graphics card. This keeps your GPU clock frequencies high in CPU-bound cases, ensuring a smooth performance.

Of course, the feature is only available to those running Nvidia graphics cards, since it’s proprietary technology. Anyone with a GTX 10 series GPU or greater will be able to reap the benefits, but if you’re running a graphics card from the RTX 20 series or RTX 30 range, you’ll see a bigger impact. If you’re curious about how it all works, Nvidia Reflex streamlines the render queue, allowing the best gaming mouse to interact with the CPU and GPU simultaneously.

Pairing Reflex with the best gaming monitors will also gain more of an advantage, as higher refresh rates go hand-in-hand with low latency. Nvidia states that this can even diminish the impact of peeker’s advantage, as you’ll be able to react faster when enemies appear on screen, and they should become apparent quicker due to the increased frame rate.

Rainbow Six Siege players initially noticed the Nvidia Reflex option in the config files when Operation Crimson Heist was released on PC. Although you could activate it in the settings, the feature wasn’t fully implemented and, therefore, didn’t impact the performance of the game. 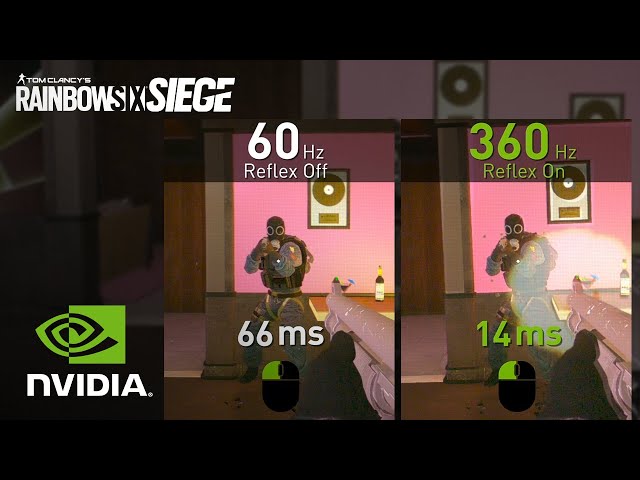 Not to be confused with the ability to measure Nvidia Reflex, which requires a specific pairing of monitors and mice, you can use the feature with any display and any gaming mouse. There’s honestly no downside if you’re already packing an Nvidia graphics card from the last five years.

Can you run it? Check the Rainbow Six Siege system requirements 2021 on PCGameBenchmark.