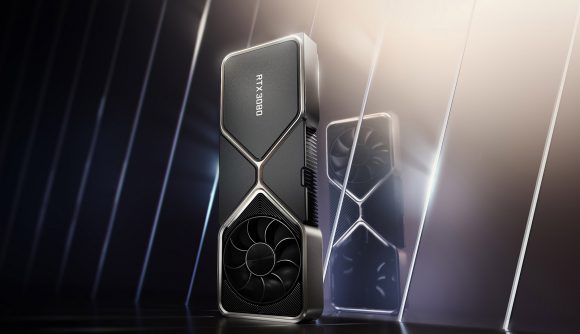 Everyone is naturally keeping their ear to the ground since the reveal of the GeForce RTX 30 series of graphics cards, eager to confirm Nvidia’s big claims about performance and value for money. Now, benchmarks are beginning to make their way out of the woodwork, with the RTX 3080 appearing on Ashes of the Singularity’s database, CompuBench, and Geekbench 5.

Touted as the “biggest generational leap” Nvidia has ever had, the RTX 3080 is considered a showstopper, with claims that the card is twice as fast as the reference 2080. Better still, the company states that the new flagship GPU outpaces the previous king, the 2080 Ti, all for a fraction of the price.

Both the Ashes of the Singularity benchmark found by @_Rogame and the Compubench results discovered by @TUM_APISAK put these claims to the test, showing impressive gains when compared to the previous generation. Still, it’s best taking it all with a pinch of salt until more real world results crop up, as these benchmarks don’t substitute for real hardware testing.

The Ashes of the Singularity benchmarks test the RTX 3080 using its crazy 4K preset, which pushes the graphics as high as they’ll go at 3840 x 2160 resolution. The results aren’t necessarily as night and day as you might have hoped, but this should be expected when testing higher resolutions and graphics settings.

It isn’t easy to use the real-time strategy game to determine how good new graphics cards are, however, as it comes with many caveats. Ashes of the Singularity doesn’t detail the clock speeds, meaning we don’t know whether this RTX 3080 is a Founder’s Edition GPU with 8704 CUDA cores and 10GB of GDDR6X memory or an overclocked variant. DX12 is also falling out of favour with reviewers, with many squeezing better performance using Vulkan, thanks to its low overhead. 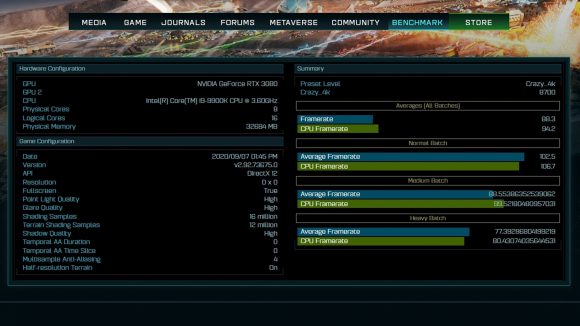 With that in mind, we can still appreciate the 17 extra frames the RTX 3080 manages to achieve over the 2080 Ti running on a comparable system, especially when the performance at 1080p resolution will likely be even greater. 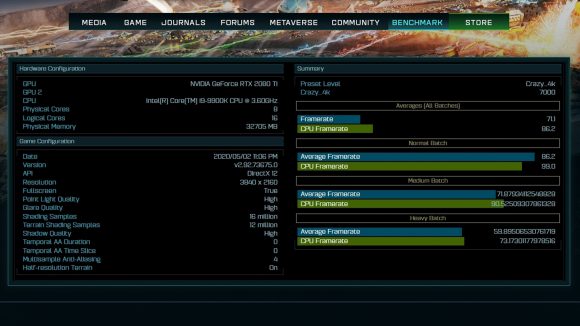 The CompuBench results are a lot more clear cut, reflecting Nvidia president Jensen Huang’s boasts about performance. When pitted against the RTX 2080, the 3080 almost doubled every category. Similarly spectacular, the 3080 triumphed over the 2080 Ti by an average of 40.6%.

While any increase in performance over the RTX 2080 Ti should be praised, particularly with the 3080 starting at $699 compared to the former’s eye watering $999 price tag at launch, these numbers are nothing to scoff at. Still, we remind you that these results do not equate to practical performance, with independent tests being far more accurate.