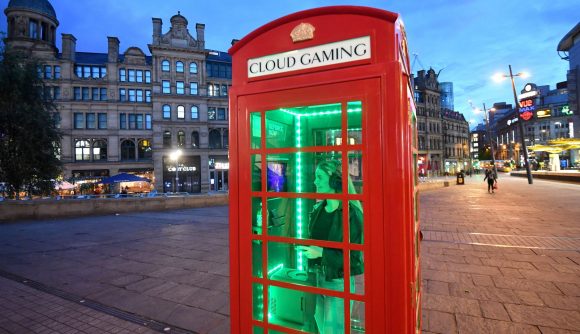 October 28, 2021 We previously indicated that the booth uses the RTX 3080 subscription of GeForce Now, when it actually uses the Priority subscription. This still gives RTX features, but not quite as robust. We apologise for this mistake.

Before the dawn of pocket-sized supercomputers, phoneboxes provided a staple service within our cities and towns. Not only did they give Clark Kent somewhere to strip off, but they also ensured a constant line of communication when out and about. While a select few remain in service today, many now live their lives as repurposed miniature coffee shops, libraries, and even defibrillator hubs. Now, it looks like these retro relics are about to take on a new role in the UK as the “world’s smallest gaming arcade”.

Powered by a 5G connection and Nvidia’s GeForce Now, the converted kiosks will use a tablet and a controller to access the service, providing users remote access to their gaming PC libraries. While you’ll need to stand within this tiny street setup, the booth does feature an integrated mini-fridge, meaning you can stay hydrated while playing within this unconventional space.

The green team claims that the cloud gaming booths will help gamers get their “daily gaming fix when they’re not at home”, but also says it’ll help safeguard “work and social life”. Weirdly, this makes playing games sound like a risque act, but Nvidia also has data to back up its objectives.

According to a poll conducted by the gaming GPU giant, 34% of gamers would prioritise finishing a level on their favourite game over eating, while 44% say they’ve escaped to the toilet during work to get in some playtime. Bizarrely, one in ten players also admitted to picking up a controller during their own wedding. Although, if we’re being honest, featuring games as a form of evening entertainment sounds like a grand idea. 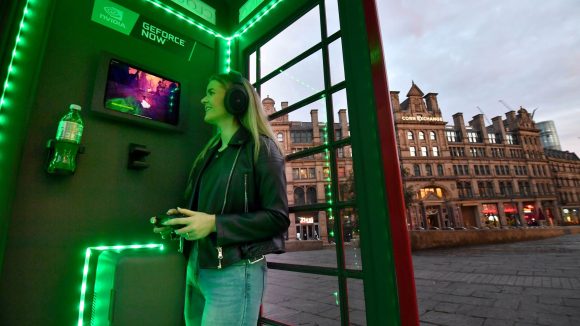 Sure, rigging up a retro phone box with GeForce Now is a novelty, but it’s also a testament to the streaming service’s versatility. While PC gaming traditionally relies on specialist hardware, we could soon have reliable access to high-spec PC games no matter where we are. Let’s just hope Nvidia’s refurbed red box plans avoid confusing denizens looking to make a simple phone call.

Sadly, it looks like Nvidia’s RGB-clad phone box isn’t a permanent fixture, as it was only around Manchester today. However, if you happen to find the booth proudly standing in your city centre in the future, why not give it a shot?