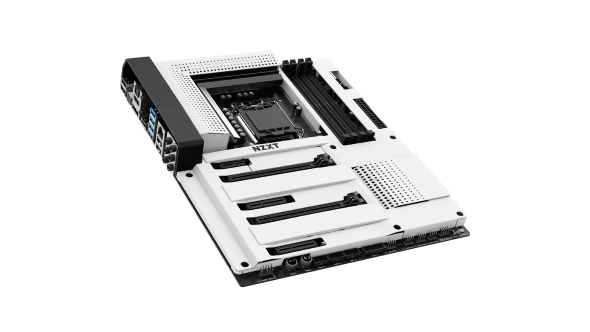 NZXT are slowly working their way into more and more PC componentry. At CES 2018, the case and occasional component manufacturers have entered a whole new ballgame – motherboards. NZXT are hoping the smart and simple style of the N7 Z370 motherboard will be enough to entice builders into unmapped territory.

Want to compare and contrast the N7? Here are the best gaming motherboards around.

NZXT have a very particular design flair. I won’t say you either love it or you hate it, because I believe the majority of people tend to see it favourably, including myself. The design of the N7 Z370 screams NZXT – regardless of the logo embellished on the front cover, you wouldn’t need me to tell you who designed it after a first look.

The design is obviously the intended draw for potential customers. What differentiates the N7 Z370 from the crowd is the complete motherboard shroud design with its exceptionally minimal aesthetic. A stylish board that is not exclusively targeted at super-hardcore competitive gamers? I’m not surprised it’s garnered some attention among enthusiasts.

The chipset and VRM heatsink facades can all be swapped out from the all-metal covers for a selection of alternative colours to mix-and-match as you see fit. At $300, it would be nice to see these included in the box, but unfortunately they are sold separately for $15 each.

The N7’s specs aren’t lacking, but at a $300/£330 price tag, this board should be jam-packed with features. Unfortunately, this isn’t exactly the case. There’s no USB Type C port on the board, or even 3.1 Gen 2 10Gbit/s in the usual fare whatsoever. For such a pricey board it seems like an oversight, as plenty of mid to high-end boards feature this connectivity. Many boards within this price range also feature built-in wi-fi, which the N7 does not – this may or may not be a dealbreaker for you. 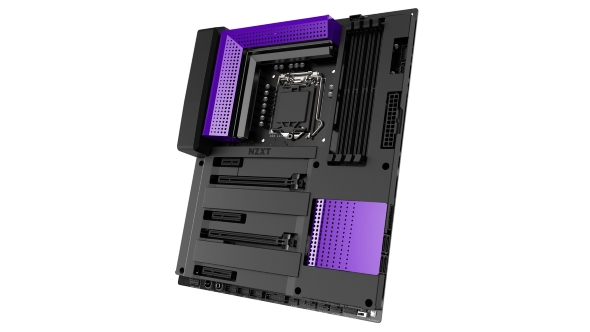 The motherboard will use NZXT’s CAM software to control fans, lighting, and performance. There is no RGB on the board natively, but features headers to connect and control RGB strips right through the board – two RGB LED strips are included. My personal experience with CAM is not too favourable, and I’m not too fussed on further reliance on the software, but your mileage may vary.

The N7 has some stiff competition at this price range. In fact, that high price tag includes almost every Z370 motherboard under the sun. Trying to compete with the the big names in motherboard manufacturing will be a tall mountain to climb, and while the board looks fantastic, NZXT will need to offer bucketloads of function as well as form to sell units at that price.

Personally, the NZXT N7 Z370 falls into the same category as supercars. Sure, it looks fantastic, but underneath all that glamour it seems impractical and expensive. Supercars do have the benefit of going very, very fast, however, and I’ll be happily proved wrong if the NZXT N7 manages the same feat. If all goes well for NZXT’s latest venture, it wouldn’t be surprising to see an AM4 board next on the list.