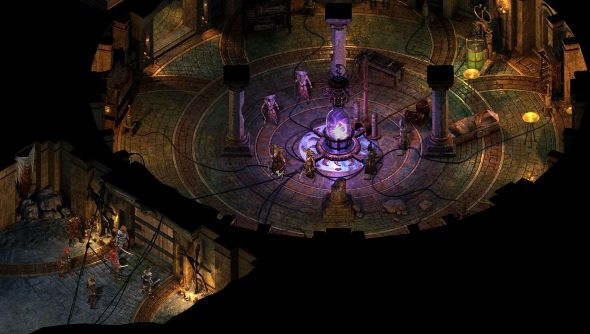 Project Eternity, now Pillars of Eternity, did absurdly well on Kickstarter, with pledges over three times what Obsidian was asking for – even more impressive considering the original goal was $1,100,000, so it should come as no surprise that Obsidian is keen to use crowdfunding once again.

Chatting with RPS, Feargus Urquhart revealed some of the ideas jockeying for position in his beautiful noggin, from a huge open world Skyrim-style RPG to a focused, character driven adventure that’s more about a small party than tactics. Nothing is etched in stone, but a second Kickstarter certainly seems to be on the cards, for a game created using Eternity’s tech.

Until recently, Obsidian had become known for taking other studios’ IPs and then doing something a bit special with them, buggy and special. There was also Alpha Protocol, which is actually fantastic, even though everyone remembers it as a broken mess. But its Kickstarter success has transformed the developer into a resurrected Black Isle Studios (even though the Black Isle name is now attatched to a completely different and utterly silent studio).

Black Isle used the Infinity Engine to craft many a wonderful RPG, all tonally different, from the dungeon-exploring Icewind Dale to the story-driven Planescape: Torment. And, of course, there was what is often considered the pinnacle of CRPGS: Baldur’s Gate. So Urquhart is thinking about doing something similar with the Eternity tech.

“What’s cool about Eternity and then, well, I’d be really surprised if we didn’t make an Eternity II, is having something else we can then use that tech for,” Urquhart explains. “I mean, not exactly, because then it would just be a reskinned Eternity. But I always look at the example of what we did back at Black Isle with Baldur’s Gate and Icewind Dale. And then Torment on top of that. Those games used the exact same engine, but they all felt very distinct. That’s what we want to do now too, and I think that’s just gonna help us make each of those games better and better.”

One of those games/concepts is the aforementioned Skyrim-like idea. “What I’m trying to figure out is, how could we make something that is more like a Skyrim for PC – forget console for now – with the engine we made in Unity for Eternity? Where we are with our conversation, quest, data editors, and all of that. If we were careful about scope and let Chris Avellone go wild with creating a new world, more of an open world, what could we do?” 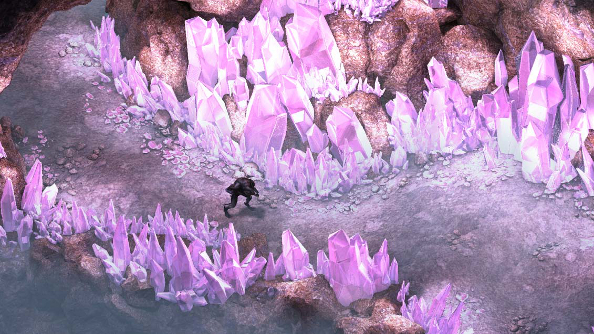 Shivers are running up my spine. What the Elder Scrolls has often lacked is a world that isn’t rote and predictable, where writing doesn’t play second fiddle to graphical fidelity and huge, open areas. But writing and world building is what Obsidian know best. A project of such huge scope throws up a lot of questions and potential problems, though, as Urquhart notes. “How much would it cost? Would it make sense for it to be episodic? Because going out there and saying, ‘We’re gonna make 100 hours of gameplay,’ everyone goes, ‘Oh my god, how could it not cost millions?’ But could we create ten hours and have people pay ten bucks? And generally when we say ten hours, it’s usually 15. But if we go with five episodes, then people get between 50 and 75 hours.”

It’s becoming more common to see developers seeking funding for a second project before their first is complete, and Obsidian may go down this route as well. “I’m happy to make Eternity, and the hope is to come up with another Kickstarter that people would be interested in. My hope is that by March or April of next year, we’ll have something we can kind of start talking to people about.”

Obsidian’s buddies at inXile did this with Torment: Tides of Numenera, not long after getting Wasteland 2 successfully funded. It’s an approach that can rub people the wrong way, as people tend to prefer to see the affects of their initial pledge before a second project is started, but there are good reasons for studios to take this risk.

When I spoke with inXile’s Kevin Saunders back in March, he made a convicing argument for why they were starting a second Kickstarter: “For a small developer, having multiple projects is very important. During different stages of production or game development, you need different people and a different-sized team. Right now, being in pre-production for Torment, we are able to have the design all established and the writing complete by the time Wasteland 2 ships in October. Then the production team can take a well-deserved break, and come back and they know what they are making.”

What would you like to see Obsidian tackle next? Personally, I’d really love to see something that isn’t set in a fantasy realm, maybe even hard sci-fi.