When it comes to naming their super techy stuff, developers either go for really boring or spectacularly over-the-top titles. Oculus’ latest VR advancement is definitely in the latter camp, but deserves no less because the Asynchronous Spacewarp tech promises to lower the barrier to entry for VR, running games at 45fps yet still feeling like 90fps.

Today’s release of the Oculus 1.10 runtime will bring smooth VR gaming performance within reach of many more people thanks to the new technique. And the best thing is that it doesn’t require any new coding as Asynchronous Spacewarp (ASW) is an active technology and is automatically enabled for any software without any extra dev effort. It was originally announced at the Oculus Connect event last month and is finally getting out into the wild.

At its most basic ASW is a frame smoothing technology that builds upon the existing Asynchronous Timewarp (ATW) feature that’s been in the Oculus Rift software since the DK2 prototypes. ATW inserts frames into the picture when the GPU or game engine is still trying to render the next one. It acts entirely outside of the game engine and adds interlinking frames based on the relative position and motion of the headset.

This allows the movement of a scene to remain smooth as you move your head even when frames are dropped, which in turn stops you from vomiting all over your keyboard. It’s limited, however, in the fact it can only shift the entire frame resulting from the changed perspective from the headset.

ASW goes one step further and is able to generate entirely new frames, again without input from the game engine or GPU, and is somehow able to shift individual elements of a scene. Oculus use the scene below to show three different frames of a scene, with the final generated scene showing the moving of the hand/gun element independently of the background. 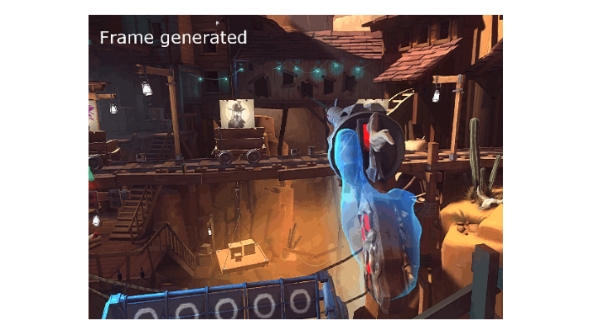 “ASW generates extrapolated frames from previous frames generated by the VR application,” Oculus explains on their developer website. “On the surface, this sounds quite a bit like ATW, which is capable of extrapolating for only a single thing: the user’s head rotation. While this covers many of the hitches, it’s not a magic bullet. ASW works in tandem with ATW to cover all visual motion within the virtual reality experience. This includes character movement, camera movement, Touch controller movement, and the player’s own positional movement. If the application falls behind the display’s frame rate, the experience typically remains smooth and enjoyable.”

With this technique the Oculus Rift enables VR on PC’s which don’t necessarily have the graphical grunt to run virtual reality titles at the requisite 90fps, the frame rate previously held as the minimum for comfortable gaming.

There might also be some visual artifacts stemming from the extrapolated, inserted frames. Rapid movement, quick changes in colours and brightness might all results in strange imagery or stretched pixels on-screen. But as things will still be moving relatively quickly, even at 45fps, chances are the artifacts will be gone before they’re even really noticed.

With this latest advancement Oculus have massively reduced the barriers to entry for VR gaming. Hitting a solid 90fps needs a lot of graphical horsepower, even at the Rift’s relatively limited resolution, but 45fps is a lot more manageable. Asynchronous Spacewarp could give the Rift the USP of being the headset for mainstream PCs, and that will help both Oculus and VR on the PC as a whole.