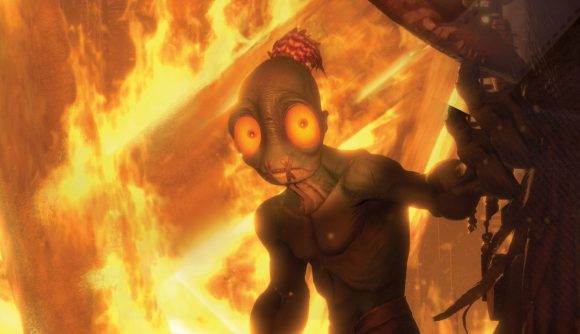 Ideally, you’ll make it through a level of Oddworld: Soulstorm without anybody dying. That’s much easier said than done, and you’re going to wrack up some replays if you’re going for perfect runs. The developers are aiming to make a totally non-lethal playthrough possible, but you’re going to have to put in some hours if you want to get the top rewards.

“The perfect way to play this, no one dies. That’s possible,” the developers tell us. “I’m pretty sure it’s possible… There might be, like, five guys you can’t help but kill, but we really want that to be the case – that they can all survive, and so hopefully we wind up in that space.

“[At the end of a level] we give you a full breakdown of your analytics. How did you do with your overall health, what’s your collectible status, how many secrets did you get, and then the different badges you got. If I platinum a level and get all the badges then that opens up some gifts, and that opens up another set of badges that can unlock. So there’s about 12 badges per level that can unlock. As an initial playthrough we’re seeing ten to 12 hours, but you can start to milk all the possibilities that are there.”

If you’re a completionist, you’re looking at “over 100 hours” to collect everything. That’s quite a time investment, but it’s not like Oddworld fans aren’t used making it through lengthy periods of time. Oddworld has left an unfinished legacy over the years, and Soulstorm – a soft remake of Abe’s Exoddus – resets things as part two of a quintology.

“Abe’s started learning that he has a much greater importance in the grand scheme of things than he ever thought. He’s having to be that reluctant hero that rises to the occasion, and he’s finding out that there’s much more of the world depending on him than he had any idea.

“It’s the second game of the quintology. Abe, the slave who started at the bottom, is going to rise, move from the third world into the second world, into the first world – where he’s in highly populated cities – and that’s where he changes the world. A guy who fled a facility and caused an uprising and shut down a factory, that becomes a trend and starts happening more and more, which becomes a movement, which becomes a revolution. And that’s going to make him public enemy number one.”

So are the Oddworld Inhabitants really planning for three more games after this? “Well that’s the idea! There’s got to be enough money to pay for them, so we need success to get there. We’re best positioned if we can make this great, make it really stand out, bring Abe back into the contemporary landscape, and not just with remasters, and then evolving that platform into new dimensions. So that’s the plan with success!”

Read more: Check out the best old games on PC

As for Soulstorm, it doesn’t quite have a release date yet, but it won’t be too long. “We want to ship in 2020. We can’t say exactly, because it’s got to be great, and we’re playing with a lot of dynamic variables.”