Do you listen to music as an active participant? Perhaps you live with a kitchen dancer. Maybe you notice that guy in the club who feels the need to indicate exactly when the drop comes in. Even though social norms deem it unacceptable, you can usually catch a commuter walking in time to the music in their earphones, or tapping out a melody using fingers on the side of their leg.

Matt’s game of the year is the ambitious Divinity: Original Sin II.

After playing Ubisoft’s Ode, it occurs to me that this compulsion – one I suffer from, on all counts – is an attempt to be part of the music. Not to play it, exactly, but to climb between its rhythms and nestle there for a while, bathing in whatever feeling it is made to evoke.

This, surely, is what music visualisers were invented for. They never seemed to recover from the decline of Windows Media Player – too passive, closer to screensavers than the sense-swapping, eye-popping promise of music made visible. But a music game built around mechanics honed in Grow Home, one of the best 3D platformers the PC has ever seen? Turns out that works. And then some.

Here’s the deal: each level is essentially a dormant song, waiting to be woken up. As Joy, Ode’s delicious squidge of a protagonist, you bop about that level brushing up against the flora – skinny-stemmed succulents, brightly-coloured mushrooms, and tall flowers topped by bells that resemble jellyfish big enough to smother you. These plants are the song’s instruments: drums, cymbals, bass, synths, guitar, and – in the case of an explosive blob that rolls towards you with the needy refrain of “just one kiss” – vocals.

To meander along the beaches or through the cave networks of Ode, interacting with its life, is to play through that level’s piece. Certain motifs are the same – the electronic buzz and kick drum of the luminous pads underfoot as you are funnelled through a tunnel, for instance – but the song comes out a little differently every time. Perhaps in this performance you fumble a jump here and land in a crop of bassy nodules, temporarily turning the tune a bit Nile Rodgers. Or next time you pause to collect glowing Luminites there, coaxing a modest guitar solo from a wiry root nearby. It is platforming as accidental improvisation, with you as clumsy conductor to a waiting orchestra. 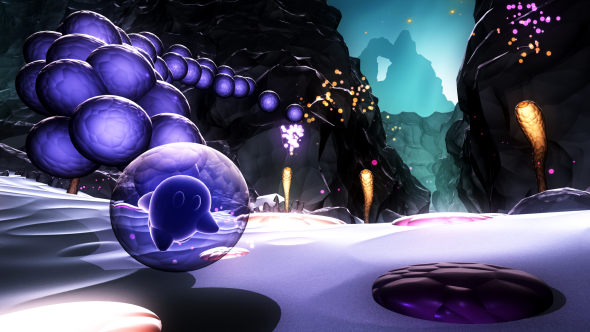 Whatever happens, it always comes out sounding really good. Reflections, working with the Parisian composer and audio director Romain His, have created an invisible system that defines the time signature, scales, chords, and harmonic progression each level sticks to. The noise tends less towards free jazz and more towards warm slices of electronica and funk. As you progress through a map, using Luminites to bring light to the greyish, sluglike denizens at its core, the piece builds to all-encompassing big beats and bass.

Ode feels like the logical evolution of both that tradition and the carefree platforming of Grow Home and Grow Up – a tactile world that puts you right inside the soundscape so many of us are apparently desperate to access.