Ode is not a game, it is an experience, designed as a garden of dynamic musi-

Ah, did I lose you there? Not surprised. Games can be about anything these days – friendship, fatherhood, the disenfranchised, toast – but we also need to feel that they are about something. We need the tangible, the relatable, and maybe, though none of us like to admit it, the familiar.

Perhaps I am better off telling you that Ode is Tony Hawk’s without the scores, or Katamari Damacy reimagined as a laser light show. It is Grow Home taken to its logical conclusion by the same team – a 3D platformer made of happiness in which nothing gets in the way. This is a Ubisoft game without a UI, minimap, or any contextual commands whatsoever.

You play as Joy, a podgy little marshmella fella who bounds and bounces around the world inside a guinea pig’s exercise ball. As would we all, if we could fit. And the world is, at least in the first level, a cave teeming with strange life.

As in Grow Up, the last platformer from this faux-indie studio within Ubisoft Reflections, you stumble around a glowing, alien environment and straight into its flora and fauna – propelled by luminous fungi and flung by bell-like protrusions hanging from the cave ceiling. And, like Grow Up, Ode is something of a collect-a-thon. As you bumble about, you knock into little orange orbs – fallen stars, or Luminites – and they cling to your exercise ball like frogspawn, following you around and feeding your character, expanding your Joy.

But Ode differs from Grow Up in two profound ways: first, it is stripped of its most game-like elements. You will never know what proportion of Luminites you picked up, your percentage progress through the game, or any of that meta data that triple-A games habitually collect and offer to us. Instead, you are left to mess about and experiment with the tickly, tactile world in front of you. 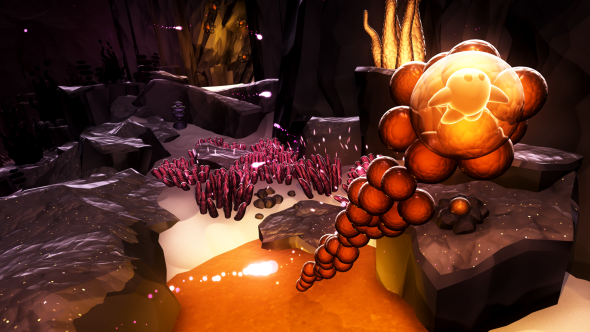 Secondly, Ode is an orchestra.

“Everything in the world is an instrument,” art director Jack Couvela explains. “Everything has its own voice, its own sound.”

That bell-like protrusion? Swing on it and you will hear woodwind – something almost but not entirely like a flute. Roll over the knobbly, pink cobbles on the ground to produce a bassline. Brush against the percussive, purple branches on the wall at the same time and, voilà, you have yourself a rhythm section solo – all of it built right into Ode’s level design.

Bumbling through that first level, I put on a haphazard live performance for my own entertainment. Not one you would pay to see, but a gospel-inflected lullaby pleasantly flavoured by the natural reverb of the environments and – crucially – a system that picks all the right notes. 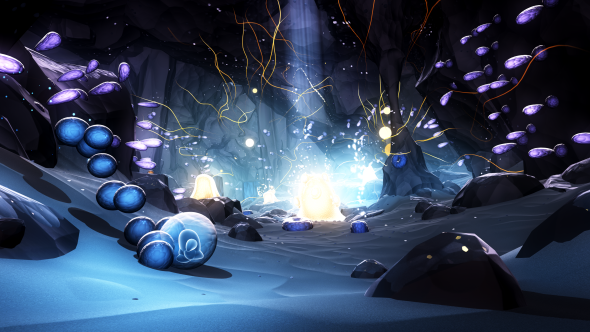 “There is a time signature, there are scales, there are chords, there is harmonic progression running in the background,” composer and audio director Romain His says. “They act as a conductor, and guarantee that everybody is reacting in harmony and rhythm with your actions.”

The Reflections team mostly collaborated with His, a veteran of Rayman and Splinter Cell, over Skype from his home in Paris. It was His who pushed the team in the direction of “mechanical synchronisation and displaying music in the world.” Ode spent a year in this conception stage, and just six months in full production.

“It was constantly evolving, and we were constantly riffing off each other – like a band, really,” Couvela says. “It was a bit like improvised jazz.” 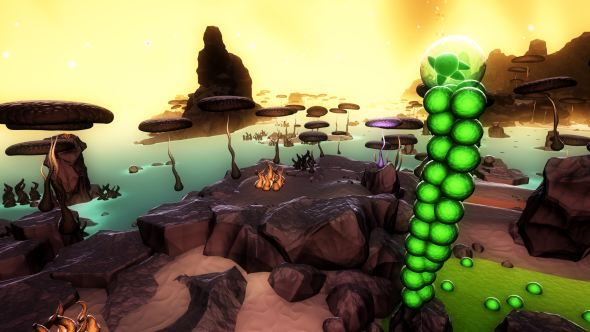 The result is a world where music, animation, and particle effects all feel tightly interwoven, to magical effect. Touch a plant of a certain type, and it is as if you have tapped into a new part of the ecosystem. The next time you jump, nearby plants of the same kind will trill or clap in unison, lighting up like diodes or spewing colour into the air.

The longer I spent bumping about that first level, the more connected to it I felt, and the more the music began to build. I grinned as the beat kicked in and – after discovering I could lend my Luminites to slimy, seal-like creatures that filled up with an orange light – gasped with delight when an entire cavern erupted into song and golden fireworks.

“We wanted to build around emotions, exploring and experimenting,” Couvela says. “There’s no right or wrong, there’s no enemies. It’s a love letter to joy and music, and we’re really proud of making a game that is purely about that.” 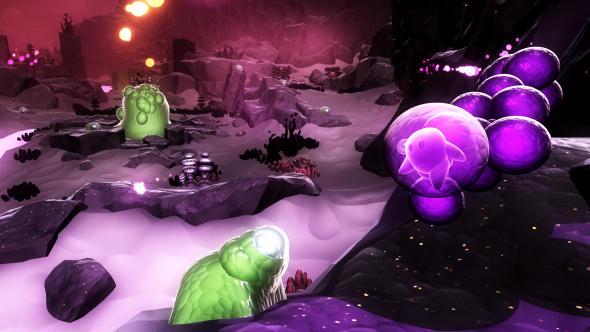 Many of the plants and animals in Ode’s world are still without names, but giving them any would seem like a disservice. Language, just like UI or overt progression systems, would put unnecessary barriers between you and the wide-eyed glee Ode is made to evoke.

My worry is that Ode will not find the audience that Grow Home did, despite bags of the same personality and childlike sweetness. So, please: do not mistake this for the abstract rhythm-action games you might have learned to ignore. Ode is a natural evolution of the 3D platformer. If you have ever played Mario and found joy in the simple act of movement, or the way the flowers dance in time to the beat, then Ode is that joy, and nothing else besides.

Surprise! Ode is out today on Uplay.