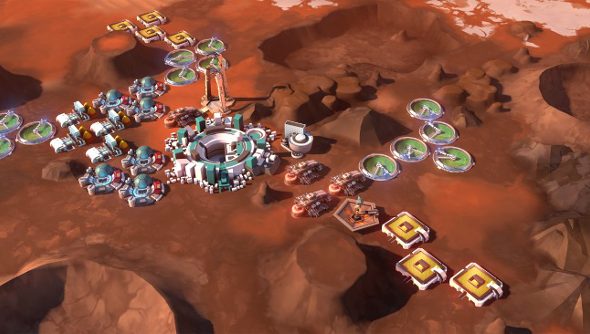 Offworld Trading Company, developed by Civilization veteran Soren Johnson’s Mohawk Games, has been keeping a low profile since it was announced last year. A martian RTS that eschews military themes for economics and market manipulation, it’s more Anno than StarCraft, but with a multiplayer focus. And it’s coming out soon, but not in its final form.

“We are now taking our next step forward, releasing Offworld on Steam Early Access to expose our game to the oxygen of player feedback,” writes Johnson. “Since last summer, we’ve run a small, private Founder’s Program that put the game into the hands of about a thousand fans who were willing to buy the game based simply on its promise and our reputation. So far, their feedback has been invaluable, and I will be forever grateful to the many who were willing to take a chance on us and our game. However, we need a much larger player base to be able to truly understand our game – enough players to poke at the holes in the AI, to be able to find each other for pick-up games, to help us discover if there are a few degenerate strategies that drown out the rest of the design. In time, players always understand games better than their designers, and if we are to make Offworld the best game it can be, we need to start that process as soon as possible.”

Offworld Trading Company will launch on Steam Early Access on February 12th, with the full game due out early next year.

You can watch Johnson streaming a multiplayer match right now, on Twitch.