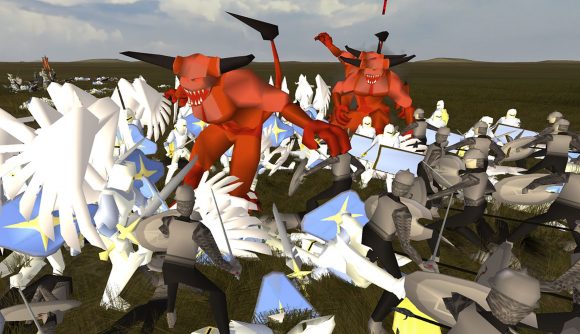 If you’re fan of classic strategy games and MMORPGs there’s a new mod for Rome: Total War that might be right up your street: RuneScape Total War. Just released in alpha, the mod overhauls the game’s units, environment, UI, music, and more to bring the look and feel of Old School RuneScape to Creative Assembly’s 2004 tactical classic.

Creators KurdishNomad and Hector set the scene for their mod on ModDB. “Once Zaros, the empty lord,” the post reads, “ruled over most of Gielinor. Zaros was feared by all but even he could not hold on to his power forever as he was betrayed by his most powerful general, a mahjarrat called Zamorak. This brought an end to Zaros’ rule. It’s the third age on Gielinor now… a time of total war!”

The modders say that the current alpha build is a relatively basic version and contains about half of the units they’re planning to create. They later intend to include most of Gielinor’s races “known to have participated in the wars” in the mod, and the playable factions are the “Zarosian Empire, Saradominist Kingdoms, Zamorakians, Guthixians, Tirannwn, Fremennik Tribes, Followers of Armadyl, Hordes of Bandos, and Desert Empire”.

It doesn’t sound like there are any campaigns just yet, as KurdishNomad says they’re planning to craft some units and settlements first, and there are also plans for new models, animations, and improvements to its “overall quality” on the way, the modders say. However, while it’s in its early stages, the mod does capture the style of Jagex’s classic MMORPG really nicely. Take a look for yourself in the clips below:

One thing to note is that the RuneScape Total War mod will require the strategy game’s Alexander expansion pack to work.

If you’re keen to play with the RuneScape Total War mod’s alpha build you can find it on ModDB right here. There’s also a whole bunch of images of unit models, in-game battles, and maps to get a look at on the mod’s page, too. As ever, mod at your own risk!