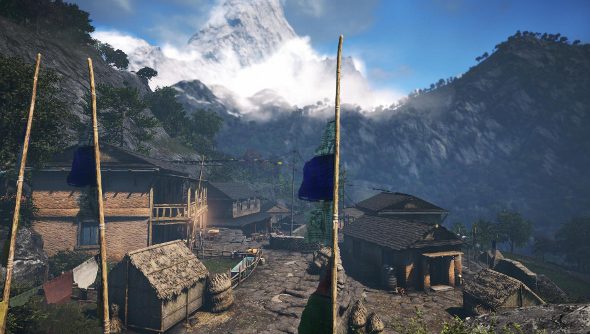 I’ve been struggling to answer a very simple question lately. It’s cropping up a lot, slithering into my brain and filling it up until it’s fit to burst. I’ve been getting lost, you see. Hopelessly lost in massive open worlds that are designed especially for me, the player. The question is why? Why am I doing this?

Why am I hunting down crates, their gem icons strewn across the map in Far Cry? Why am I searching for hidden artefacts scattered across the wastes in Shadows of Mordor? Shouldn’t I be inspired? Shouldn’t it be fun? It isn’t, though. And I’m lost.

It used to be so damn easy to answer.

I’m playing a game, it doesn’t matter what it is, and I’m working towards an objective, it doesn’t matter what it is. I’m little, and that matters. It matters because fun was so easy to find back then, or at least I remember it being easy. That’s the problem with nostalgia, isn’t it? It’s tricky and it lies. But let’s pretend I have 20/20 vision when it comes to my past.

So I’m playing this game that doesn’t matter, and my Dad asks me that question: why are you doing that? I’m having fun, I say. I’m engaged and it’s all very exciting, working towards some goal, focusing entirely on it, and grinning the whole time. The world exists to entertain me, and gosh isn’t that a wonderful feeling when you are another otherwise powerless mite?

That was then. It’s different now. 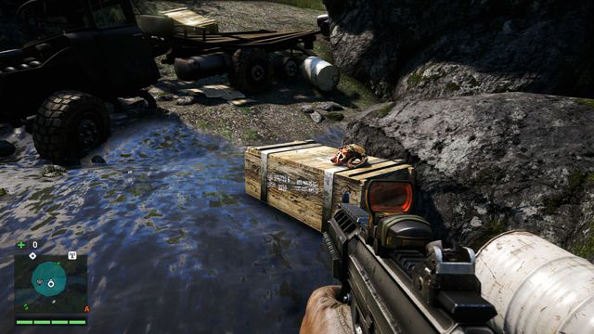 I’m playing Far Cry 4 and I’m in a cave. I’ve never been here before, but it’s like many caves I have been in. It’s dark and dirty and roots hang from the ceiling. There are dead bodies on the ground. I have killed some men. At the end of the cave, which is very small, there is a crate. Inside it is junk. A photograph. A lighter. Useless. They are immediately transformed into cold, hard cash.

This cave exists solely to contain men, who are now dead, and a crate, which is full of crap. Below, there are elephants that I can spook, sending them stampeding into a group of enemies. Some ways down the road there’s a fortress, an enemy base that will pose a tricky challenge. There is fun to be found, but here I am, in this fucking cave, looting pointless tat.

There is no meaningful reason. The cave and the gem icon serve to draw me away from the main path, extend the amount of time I play for. It’s more bang for my buck! Except that it isn’t. It’s like saying that I am a better man now because years of abusing my body has made me overweight. I’m bigger, so I must be better!

Like me, open world games are overweight. I’ve been going to the gym, because it’s summer time and the world deserves a Fraser with a sexy beach bod, but open world games are just getting bigger. None of that equates to more meaningful interactions with the world, it just means that there’s more stuff. More rubbish.

This is where a seemingly sensible person steps in and points out that I don’t need to engage with the filler, the fluff. I can ignore it and just seek out experiences that are actually fun. There are plenty of them to be found in these constantly expanding open worlds. But that sensible person is a little bit wrong. 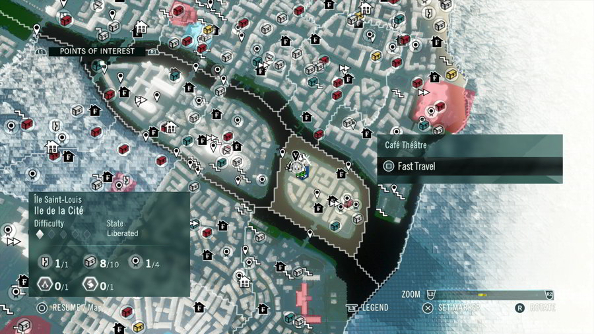 Open worlds are full of seductive numbers and icons. How many games display a percentage that shows how much of them you’ve completed? Most of them, right? These percentages used to be tucked away in a stats menu or the save screen, but they are increasingly being given pride of place at the start screen or in another highly visible place. It’s a clever psychological trick that helps you manage the scale of the game, make it seem more surmountable, and it also keeps you playing.

100 percent is great! It’s a perfect score! You really need to hit that all important number.

It’s certainly not fun, in and of itself. But there’s a hint of satisfaction there, like that moment when you take a long drag of a cigarette, the smoke hits your lungs, you get that amazing tingle, and then your body just sinks. I’m trying and failing to quit smoking, so it’s on my mind. Forgive the analogy if you don’t smoke. It’s not fun, smoking. It’s horrifically bad for me, too. But I’m compelled to do it anyway, just as I am, to a lesser degree, compelled to get that number to 100. But attempting to get there isn’t satisfying. Only the moment when you actually reach it.

Lamentably, the secrets suggested by these map icons are just as compelling as the secrets barely held onto by gossips. A mask in Far Cry 4 or a shard in Dragon Age: Inquisition amount to “Janet is sleeping with a married man.” Who gives a shit? 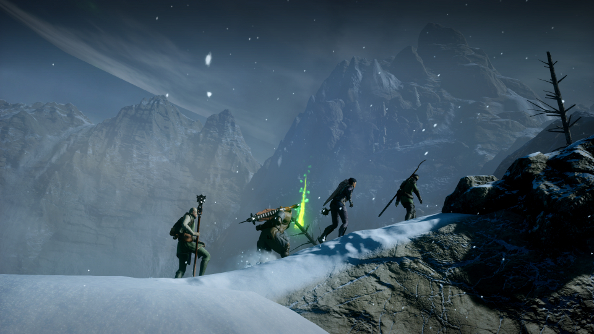 So you get some cash that you already have enough of, because screw a balanced economy, or some experience or some karma or some random number in a silly system – is that fun? You get a bit stronger, maybe, or a bit richer, maybe, but none of that really matters if the journey to that point is devoid of meaning. We have to do boring things to progress through our regular lives, why the hell should we have to do the same in our digital ones?

A few years ago I had a very long chat with Al Lowe, creator of Leisure Suit Larry. We got chatting about death in adventure games and a few particularly obtuse puzzles, and Lowe noted that these sorts of things were often really just used as stoppers, obstacles for the sake of increasing the length of what were quite short games. This was back when adventure games were AAA, pushing the boundaries in terms of tech and gameplay. Designers needed to find a way to make them meatier, bigger, and stupidly difficult puzzles or arbitrary deaths did that artificially.

Not much has changed, it’s just that these AAA games are now 60 hours long instead of 5 or 10.

I remember getting frustrated by those things back in the ‘90s, but there was still an element of fun. Death could be a surprise wrapped up in a gag, and a particularly obtuse puzzle, while annoying at the time, still rewarded me with meaningful progress, letting me continue the story and giving me a sense of satisfaction. In Shadow of Mordor, where’s the meaningful progress when you head to a highlighted spot on the map, press a button, and immediately uncover an artefact that does nothing? Where’s the challenge or the satisfaction? It’s entirely absent. 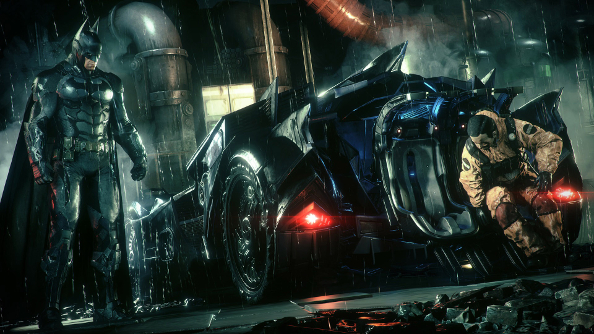 According to HowLongToBeat.com, Assassin’s Creed Unity’s story can be completed in 16 hours. Want to erase all of those pesky map icons as well? 78 hours. That’s 62 hours of extra, non-essential content. Batman: Arkham Knight is a bit more reasonable, with 14 hours needed to complete the story, while properly completing the game will take around 38. But still, that’s 24 hours. A whole day. Not all of that extra stuff is meaningless filler, but there’s still a lot. And worse, in both Assassin’s Creed Unity and Arkham Knight, we’re faced with tasks ripped straight out of earlier games. It’s not just busywork, it’s busywork that we’ve already done.

I finally snapped when I was playing The Witcher 3. It’s not because Geralt’s final adventure is full of faffing and endless amounts of time wasting, but because in the 92 hours I played it for, I never once grew bored. I was hooked. I played those 92 hours across the space of a week, which works out at just over 13 hours a day. For seven days. I could have played more. I wanted to, but I had a review deadline.

Sure, there were shrines that I hunted down that only served to give me a buff, and hundreds of monster nests that needed to be blown up, but they were surrounded by rich quests and meaningful stories. I never aimlessly went off the beaten track in search for something ultimately mundane – I was always inspired to head off in a certain direction because of something magical, something compelling. Not an icon.

The Witcher 3 is an exceptional game, regardless, but it shouldn’t be exceptional for not wasting our time. That should be the norm. And this weird problem is something specific to our unusual medium. PR and marketers love to tell us how long a game is, but could you imagine a publisher doing that with a book?

“Buy The Brothers Karamazov today! It’s bloody massive! You’ll be at it all week!” 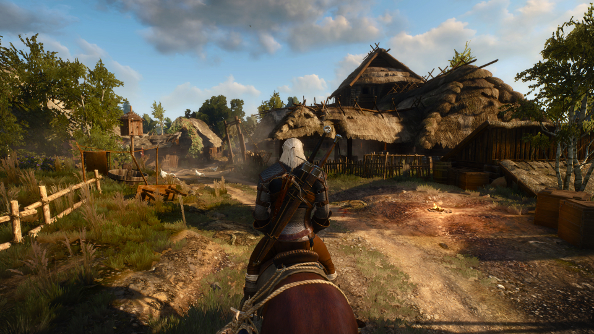 And you’re not going to see a production company boasting about the runtime of a movie, either. It seems to be exclusive to games, particularly open world games. Is it a cost thing? If we’re spending £40 on a game, should we expect a certain length? I used to think that the problem was weak producers who aren’t capable of reining in overly-eager designers, but I’ve come to reasses that assumption. Now I wonder if it’s fear. Fear that people will complain that the game’s too short. It’s the silliest thing to moan about, but it happens all the time.

Would you be put off by an open world game that only takes a few hours to complete? Is there a point where the price becomes too high, just because the game’s not long enough?

I’m typing this as the sun is coming up, making the overcast sky glow just a little bit. It’s a time for realisations. I’m realising that I’m lost because of a strange video game cultural quirk. I’m lost and struggling to find meaning in the pointless, neverending search for half-baked points of interest and it might all be because we’re a little bit shallow (maybe not all of us, not you, you’re great), myself included. We want bigger worlds, with more content, and we want to feel like that money we just spent on the game is going to be worth it. And then I wonder how many people would play a game like Her Story – a short, mechanically simple, fixed-in-one-place game that can be completed in an hour or two – if it had been £30? Would I have bought it?

How gloomy! And now let me leave you on an even gloomier note, an article we posted yesterday. Ubisoft’s Yves Guillemot made a half-hearted mea culpa in regards to the okay but not great Watch Dogs. He said that the team ended up being restrained by putting so much in the game. I completely agree. But with that admission comes a caveat.

“It’s just so complex – seamless multiplayer, connectivity with mobile and tablets, so many things – it was maybe a bit too much for a first iteration.”

So next time, will they scale it back? Will it be more focused? Nah, it was only maybe a problem because it was the first game in what is now a major franchise (of one game). Good grief. It never ends.