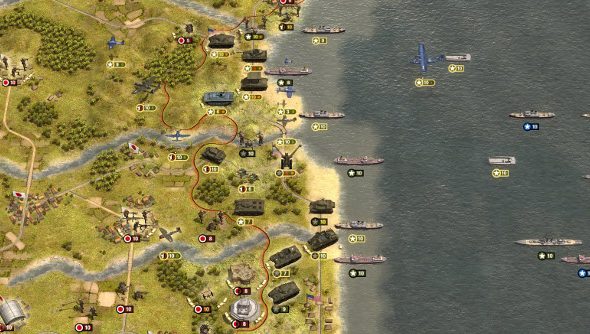 Order of Battle: Pacific is. unexpectedly, the best wargame released so far this year. This approachable, Panzer General-inspired wargame is developed by The Aristocrats and published by Slitherine, has devoured my time in the last week or so and might just be my favorite turn-based wargame since Unity of Command.

But in order to understand why this game is so good and so special, you have to understand all the reasons it should never have worked at all.

It is a kiss-of-death to just about every game it appears in. You move your units to a harbor. You slowly move them out onto the water or onto a transport, and then you have to shepherd them on their plodding path across the water to wherever they’re going, at which point you have do the same thing in reverse, except this time you’re probably getting shot at and your units are getting destroyed in the landing area, meaning that half of what you brought ends up going to waste almost immediately. It’s more annoying than difficult, and I usually go to great lengths to avoid it.

The best solutions to naval transport have been to almost ignore it entirely. Brian Reynolds just had ground units turn into transports when they reach the water in Rise of Nations, and Civilization V did the same thing. Even then, movement by water still feels like a comparative hassle.

So what do you do with the Pacific theater of World War 2, where movement by water was the entire campaign? If you ignore it and focus on the ground combat, you’ve got a series of bloody, lopsided attrition battles without much room for maneuver or tactical creativity. But if you tackle island-hopping authentically, then you also have to tackle transport and naval combat as well. You can’t isolate the land battle of Guadalcanal from the naval clashes that gave the campaign its shape. But creating a wargame system that makes both land and naval combat fun isn’t easy.

Order of Battle: Pacific doesn’t shy from any of these hurdles, and it clears them all beautifully. It’s the most enjoyable treatment of the Pacific Theater I’ve ever played. It’s evokes the complexity and challenge of operations in the Pacific, but never bogs down in detail. 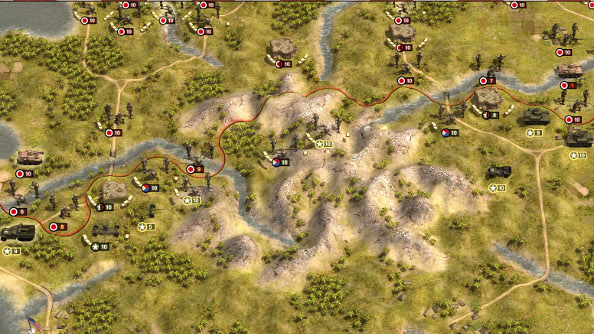 On the surface, Order of Battle: Pacific looks like a game we’ve seen before. It’s a descendant of Panzer General, where units can move once and fight once each turn and whose strength is denoted by hitpoints. Panzer Corps, another Slitherine-published game, used this formula to good effect, but didn’t significantly evolve it beyond Panzer General 2. You could be forgiven, judging by the art style and mechanics, that the same thing is going on here.

You’d be wrong, however. To start with, Order of Battle: Pacific is a slightly more serious wargame than either Panzer General or Panzer Corps. Units need to be able to trace their supply back to a node if they want to avoid penalties, meaning that units can be cut off from supply and positions can be isolated by encirclement attacks, and units caught in the pocket will slowly lose efficiency due to reduced supply. More significant, however, is the way that Order of Battle handles ambushes and the fog of war.

Both Panzer General and especially Panzer Corps relied on scenarios that operated almost like puzzles. Since all your units were effectively blind, except for recon units, you never knew what your units were going into. But since units could only move once, scouting wasn’t really possible. You either plodded forward in safety, but at the expense of bonus points for speed, or you advanced aggressively, knowing that any units that encountered an unexpected enemy would be shattered in the ambush. Most scenarios had solutions you you could learn via rote memorization of enemy positions.

Order of Battle doesn’t do that. The speed with which you seize objectives matters, and completing secondary objectives will provide bonuses later in the campaign (while failures might cause extra complications down the road), but the game doesn’t punish you for overextending. Your units will take extra damage in an ambush, but they won’t be wrecked by it. Nor does the AI just sit passively around objectives, waiting for you to blunder into it. The AI will conduct aggressive local counterattacks, hitting vulnerable units with armor and trying to cut off your spearheads. It’s not just an obstacle, but an opponent.

The biggest obstacle in the game, of course, is the Pacific itself. A lot of scenarios involve the difficulties of getting an invasion force from one island to another, without losing a ton of troop ships to enemy battleships and carriers. It’s as tricky as it sounds: you need to both find a suitable landing location, figure out where the enemy’s warships are hiding, intercept their fighters and bombers, and then make sure your invasion force has enough reinforcements and supplies coming ashore to survive. Oh, and the waters near the beaches are probably mined. Good luck with that. 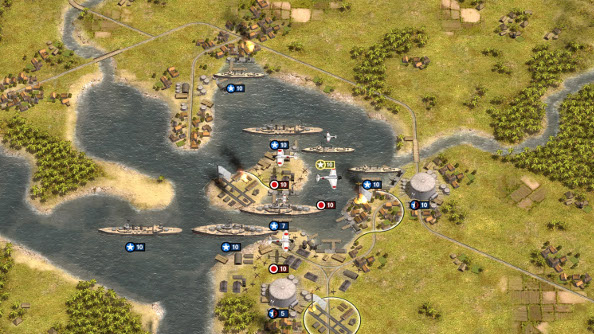 The naval combat is surprisingly good. Each ship has important dual-roles to fill, creating tension in how you manage them. Destroyers are great for scouting, but they also need to stay near the battleships and carriers to detect and destroy submarines. Cruisers are good at chasing down and harassing enemy capital ships, but they also provide a good umbrella of anti-aircraft fire against incoming bombers. Battleships are self-explanatory, but getting them in striking distance of an enemy fleet requires a lot of careful planning. Besides, you might want them tasked to the invasion, providing fire support.

That said, the navies are at their most interesting when they are in the context of an amphibious landing. The scenarios that are entirely about fleet clashes are a bit lackluster, since it tends to devolve into two groups of ships chipping away at each other for ages. Destroyers, particularly, seem improbably hardy in these scenarios, standing up under sustained battleship fire rather than going to the bottom like they should.

Order of Battle: Pacific also commits the error of trying to build a scenario around every major event in the Pacific war. That means both the American and Japanese campaigns open with abysmal Pearl Harbor scenarios in which, you guessed it, a lot of American ships get sunk without much opposition. These obligatory historical beats are some of the weakest in the game.

The AI has some problems, of course. It doesn’t seem to know when a scenario is ending. On the final turns of a battle, when it should be putting everything into an objective, it will execute a routine turn: it will repair units, chase down your stragglers, and generally forget that the entire scenario hinges on an objective that is just a hex away. I also didn’t notice a significant difference between the easier difficulties and the harder ones, except that the AI seems to have more slightly more, slightly beefier units. 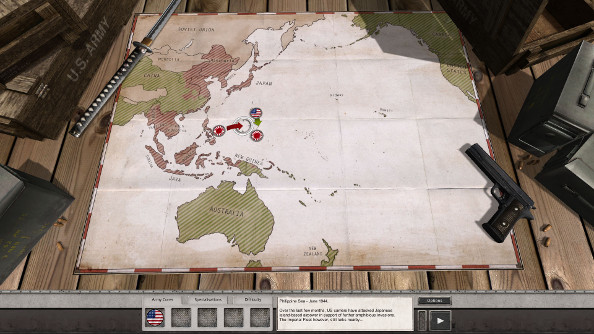 But the highest compliment I can pay Order of Battle is to tell you what happened at the end of my second scenario in the American campaign. My forces were conducting a delaying battle to buy time for American and Filipino units to withdraw off the south edge of the map, while overwhelming Japanese forces poured down from the north. I had to hold all the primary objectives for 15 turns, and would get a bonus for holding all the secondary objectives as well.

Things went well for the first nine turns. The early Japanese attacks were stymied as they crossed a heavily-defended river, and my light armor did a good job of plugging holes and crushing overextended units. But then the Japanese artillery started clobbering my positions, and my retreat from the river line degenerated into a rout on the right flank, as a few beleaguered American infantry units struggled to escape the ruins of a city.

I was holding on, barely, by the start of turn 13. I had a new series of defensive positions… but not much to hold them with. My infantry were dead or below 50% strength. I’d had no time to dig-in, so I couldn’t count on defensive bonuses. My air units were routed and fleeing from Japanese Zeros. And across my front, I was dealing with waves of Japanese infantry and armor.

I used my armor to counterattack and thrust a salient into the Japanese position around my most vulnerable victory location. The other location was well-defended by a single American infantry unit, but I had to use my armor and remaining infantry there to conduct counterattacks of their own just to reduce the strength of the Japanese forces over there, so they wouldn’t overpower my defenders. Then, with my entire army teetering, I hit “end turn.” Then I did something that never happens outside of a boardgame with friends: I stood up from my desk and watched the AI take its turn while I rocked back and forth and nervously rubbed at my jaw. I was too anxious to sit in my chair

The Japanese forces tried to cross a river on my right flank and were rebuffed. Then I watched as they tried to storm the center, but only succeeded in driving back my armor, running out of steam before the city I was defending. Finally, they attacked in the west, storming my airfield and destroying a few of my best units. But my Americans still held the objective. I’d won the maximum victory not just by a single turn, but by a single hex.

Order of Battle: Pacific is that dramatic, and the scenarios can be that finely-balanced. Once I start a scenario, I find it almost impossible to quit until I’ve seen it through to the end. Fast, approachable, and challenging, it is everything I want in a wargame.

Order of Battle: Pacific is on sale now for $35.