Left 4 Dead 3 it’s not, but Overkill’s The Walking Dead gets a surprisingly firm grip on you as it chomps into your time. This is the TV show adaptation crafted by the hands behind Payday. The studio’s bank-heist games suffer from flimsy gunplay, but offer value in tense, tactical approaches to grabbing cash and escaping the feds. Similar elements can be found in The Walking Dead, but are bolstered by the additional threat of the shuffling undead and a crumbling society.

A hands-on demo at E3 2018 revealed a number of interesting systems that elevate Overkill’s The Walking Dead above being yet another zombie smasher in the vein of Dead Island. As anyone who’s read or watched something set in Robert Kirkman’s everlasting apocalypse will know, staying silent is of paramount importance. The crack of a single gunshot can attract a legion of animated corpses, leading to overwhelming odds and gnawed flesh, and so it goes in this game adaptation.

Hold the undead tide back with the very best zombie games on PC.

This means Overkill’s key governing system is sound. So while its structure bears many similarities to Valve’s iconic zombie game – four players in co-op, moving from objective to objective – the rhythm is running at an entirely different tempo. A noise meter in the top-middle of the HUD constantly informs your group of their decibels, and thus much of your progress is made while crouched and clutching silent melee weapons.

Combat with zombies is largely made up of the thwack of baseball bats and the squelch of knives burrowing into softened skulls. When isolated or in small groups, zeds are easily outsmarted, and strafing around them while attempting to score a homerun with their noggins is a wise strategy. Make too much of a clatter, though, and they’ll bunch up and drag you down, making up for their slow speed by forcing you into an inescapable corner.

Working out how to quietly progress through overgrown streets and houses could be a whole game by itself, especially since you have to fill the noise meter to complete certain objectives, such as turning on a generator. Make too much noise before flipping the switch and the meter will overfill, increasing the overall alertness of the area’s zombies by one level, meaning there will be more undead waiting around every corner. But on top of all this are The Walking Dead’s real monsters: humanity.

Truly setting itself apart from Left 4 Dead, Overkill’s The Walking Dead’s human enemies are the ones that can cause the most problems. They’re much brighter than zombies and will work together to flush you out of position. They’re also fond of using loud, rattly assault rifles, which are beacons for zombie attention. Even if you’re not a fan of The Walking Dead, you should already be able to see how these noisy humans can be a vital part of your tactics.

Zombies don’t care if you’re a player or an NPC; every brain’s a good one. Thus, arranging zombies in such a position that your human enemies practically feed themselves to rotting mouths is a sensible and effective strategy. Break open a few locks to a human stronghold, initiate a firefight, and then keep silent enough for the zombies to close in on your foes. 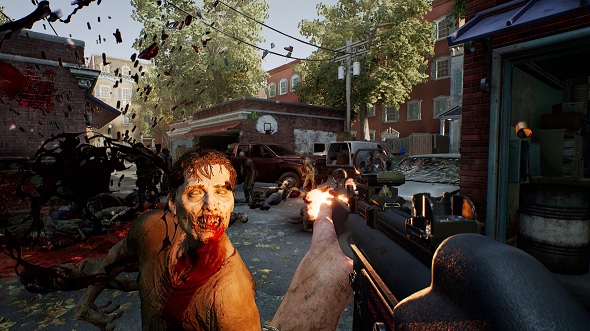 Every single street, building, and room requires this level of thought. How can I cross this area? Who can break into this house? How do we move past this patrol? The lethality of the enemies means everyone needs to work together to execute even the smallest plans, and as such there’s an element of Rainbow Six to it all.

Cementing this further is the fact that each of The Walking Dead’s four playable characters have unique skills and weapons. So it may be that you need Grant to provide overwatch with his sniper rifle, while Maya heals Aidan, who was helping beat away zombies who were let into the area after Heather cut open a wire fence with her clippers. Everyone has both a specific weapon loadout and the ability to craft certain tools, so ensuring everyone is working together to get to the right location and enact their role is important when seeking efficient success. 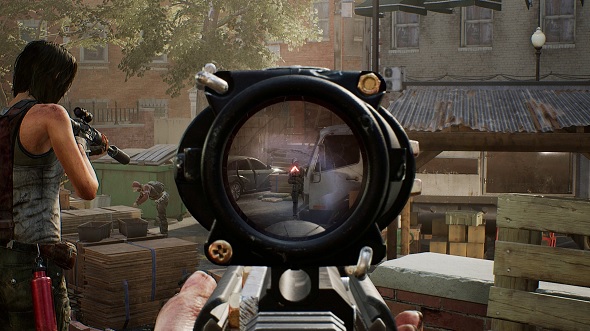 Being alert and aware of your surroundings helps you minimise noise and enact your tactics without hiccups, and so squad communication is vital. You’ll want to call out the location of scraps found around the levels, which can be crafted by the right person into lockpicks, wire cutters, and various other life-saving tools. Trip wires set in doorways can slam bottles together to summon zombies, or cause explosives to engulf you in flame, so calling out traps to a buddy who can disarm them is necessary to get your team through the level unscathed and with the zombie alert meter kept low.

Valve’s beloved zombie blaster is not a game devoid of tactics, but Overkill’s The Walking Dead provides a very different angle on co-op shooter survival. By doubling down on the fears and logic of the TV show and comics, the development team has created a distinct atmosphere and rhythm for its game that helps single it out from the competition. I have my doubts that it can sustain the infinite replayability of Left 4 Dead – its edges are much rougher, its journey more arduous, and its combat less immediate – but considering Payday 2 often finds its way into the top ten played games on Steam, and there’s no Left 4 Dead 3 release date in sight, perhaps a new king of the undead is about to enter the arena.