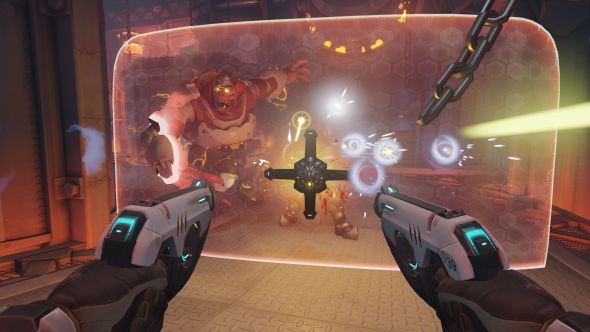 In response to fan feedback, Overwatch’s principal designer Geoff Goodman has justified the recent PTR changes to D.Va. The mech-driving Korean gamer is one of the linchpins of Overwatch’s current ‘tank meta’, which developers Blizzard are seemingly trying to unpick.

Sometimes competition and cooperation are better than isolation, right? Check out the best multiplayer games on PC.

Overwatch’s 1.7 update went live on its PTR last week, and has already proved controversial. Developers Blizzard have had to revise the changes to Roadhog’s hook and have made far-reaching nerfs to Ana and D.Va. It seems the changes to the latter have left some fans confused, and so Goodman took to the forums to explain.

He first addresses a post that queries the changes to D.Va’s damage, which has been dropped to two per pellet rather than three, which the number of pellets in her each shotgun-like blast has been raised to eleven. With more pellets filling in the same spread as before, damage in each blast should be more consistent. Total potential damage per blast is down, but that’s OK, as Goodman says the change “is intended to be a small nerf.”

D’Va is “intended to be weaker versus faster firing weapons (and shotguns), such as Reaper and Tracer,” says Goodman. “The game is a lot healthier when heroes have strengths and weaknesses versus other heroes. As she was, it was common to hear people ask ‘What do I do about D.Va?'”

Armour takes five damage off any single hit that deals more than ten, but if a hit deals less than ten, damage is halved. This means that armour is very little help against high-damage single shots, as you’re blocking a measly 5 damage from a hit that might do 70 (like a round from McCree’s Peacekeeper, for example) or more.

However, armour is very good against weapons that rely on hitting multiple low-damage projectiles, like Reaper’s pellet-spraying shotguns or Tracer’s fast-firing pulse pistols. In these cases, armour essentially halves the damage taken.

Hence, “with lowered armour, [D.Va] now has more legitimate counters and she still counters many heroes and abilities in the game, especially considering her Defense Matrix wasn’t touched.”

Goodman says Blizzard will watch and take action if D.Va ends up too weak as a result of these changes, but any such action is unlikely “to come back in the form of a bunch of armour, since that would just put us back to the problems we had to begin with.”