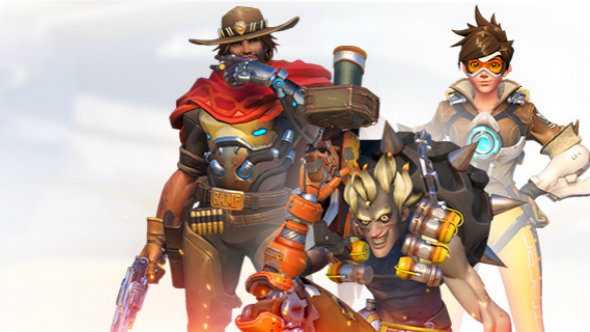 I’m late to the Overwatch party. Instead of running around Blizzard’s colourful worlds for the last year I stayed in my comfort zone: Team Fortress 2. It’s been my go to game since I started PC gaming, and I’ve racked up nearly 400 hours in it.

But after watching hundreds of suitably flashy gifs on the Overwatch subreddit earlier this month, I decided I’d had enough waiting, and took the plunge. I’d read a lot of pieces comparing the two games and their characters, and Blizzard clearly took lessons from Valve’s multiplayer masterpiece. So it got me thinking: would my time in TF2 benefit me in Overwatch?

I focussed my first ten hours or play on four characters that had most similarities to my favourite TF2 classes to find out.

One is a muscle-bound Viking dwarf with a bionic arm, the other a soft-spoken Texan who calls his enemies “corn cakes”. But they both share one important passion: turrets.

Functionally, their gadgets work in the same way – you throw down a low-level gun and hit it with your melee weapon to upgrade it. The Engineer’s has three levels to Torbjörn’s two in regular play – but Torbjörn’s ultimate ability upgrades his turret one stage further, so they’re virtually the same in that respect.

Both turrets pump out damage and auto-aim, so all the skill comes in placing them in the right positions. TF2 prepared me well for this – I avoided the noob trap of flinging them down in the open, keeping them sheltered behind at least light cover so they could fire on enemies without being taken down. Pretty simple stuff.

However, I found myself playing far too passively. As an Engineer, you’re constantly tending to your dispenser and teleporters alongside your turret – as Torbjorn, I was just twiddling my thumbs and flinging out the odd armour pack. What I hadn’t quite realised was the power of Torbjorn’s rivet gun, which fires molten lava in an arc or, if you right click, in a tight shotgun-style spread.

That is essentially his main source of DPS. It’s a completely different mindset to playing Engineer and took a lot of getting used to. The rivet gun puts out a surprising amount of hurt at mid range, provided you can land headshots, which is easier said than done.

Success as Torbjorn seems, to my eye, to rely on getting good with this weapon – and I’m not there yet. There isn’t a comparable gun in TF2, and I’m still getting used to its projectile drop off, as well as when to use its primary and secondary fire. Until I can consistently land headshots, my well-placed turrets will do some work – but I’ll be far less useful to my team than I am as an Engineer.

Hanzo may not carry a jar of piss around to soak enemies with, but he’s pretty similar to TF2’s Sniper, specifically when our favourite Aussie is using his Hunstman.

Both characters have bow and arrows that require you to aim ahead of your target in order to land a shot. For new players used to firing guns, it can feel a bit alien. But perhaps partly because of my experience with Sniper I instantly started scoring well with Hanzo, getting gold medals for eliminations in two out of my first three games with him.

Mechanically, there are differences between the two weapons. Hanzo’s arrows travel much faster than Sniper’s, placing his Storm Bow halfway between the Hunstman and a hitscan weapon. That makes it, from my experience, less spammable – a quicker travel time gives enemies less chance to simply walk into your arrows when you shoot at a likely spot, as you can often do in TF2. But these are differences of degrees, not fundamental shifts.

Both heroes are also most effective at similar mid-range distances, sitting behind or above your tanks, and so positioning felt natural. And it helps that Hanzo’s abilities are also easy to understand and use: you can’t really go wrong with Sonic Arrow, which reveals enemy locations, his Scatter Arrows are fairly situational, so I got away with using them sparingly, and his ultimate is straightforward.

It did take a bit of time to get used to Hanzo’s Wall Climb ability, which sees him scamper up the side of buildings to gain the higher ground. It’s the kind of manoeuvrability that the Sniper lacks.

I also haven’t quite got the knack of headshots – perhaps because I’m used to TF2’s notoriously large hit boxes. But I’m getting there. Playing Hunstman has given me a solid grounding in bow and arrow combat, and I’ll make a decent Hanzo yet.

The internet told me that Bastion was the nearest comparable hero to TF2’s heavy weapons guy, and so I believed it. But while both have weapons that can shred enemies in seconds, they play very differently, as I quickly found out.

The huge Russian is hardly mobile but he can at least move, unlike Bastion in his sentry form, which took some getting used to. I wanted to try and push around corners as you can with Heavy, but was immediately shut down. Run in when in recon configuration and your damage output isn’t high enough; plonk yourself down and you’re a sitting duck.

I soon learnt to use Bastion more defensively than I’d ever done with Heavy, bedding down in strategic positions, revving up, killing a few enemies, and moving to a different spot.

However, I really had no reference for where to position myself – nothing that I could take from my TF2 days. Sometimes I’d find a good spot where I could catch enemies off guard, but more often than not I seemed to stand out like a beacon, come under fire, and have to retreat.

Sure, when you mow down a line of hopeless enemies, spurting out hundreds of bullets, it’s easy to see where the comparisons come from. But the likeness is more visual than strategic and if I’m honest, my time as Heavy has been of little help for succeeding as Bastion save for learning to track enemies with my mouse, which I could’ve done in any FPS.

I’ve tried other tanks to see if there’s any crossover, and Orisa was probably the closest I found, but she and the others are so reliant on their abilities that controlling them feels like a different world. Which, after all, it is.

This was the one I was most excited about. Medic is my favourite TF2 character, and I’ve ploughed more than 100 hours into the class and tens more watching pros to pick up tips. I consider myself to be a solid healer – it’s the only class I can consistently shine with in the game’s competitive mode.

So I held high hopes for Mercy. Her Caduceus staff has the same beam-based mechanics as the Medic’s Medi Gun: aim in the direction of an ally, click, and voila – health.

With that knowledge alone I was able to make decent progress. From my time with TF2 I’m used to keeping a careful eye on my team mate’s health bars, prioritising heals for those in immediate danger, and ensuring I keep peripheral characters topped up before intense firefights. Switching to damage boost when everybody was fully healed felt like a natural progression of the Medic’s overheal mechanic, which allows him to boost health above 100%.

Another benefit of playing as Medic was that I was able to avoid a lot of damage. I was more cautious than most, making sure I had solid objects – Rheinhart’s shield or, preferably, a brick wall – between me and the enemy team. I even got used to popping Guardian Angel to fly away from danger when it all got too hot.

So far, so good. But there’s one thing I can’t get my head around: avoiding flankers. I simply don’t know the maps well enough yet, and just when I think I’m on a good run a Tracer or Reaper will emerge from an opening I didn’t know existed and blast me in the face before I can fly away.

Mechanically, the Medic has prepared me well – but there’s no getting away from the fact that playing as Mercy requires you to learn the maps better than perhaps any other character. I still don’t know every bend of Route 66, or all the best flanking routes on Ilios. Sadly, that will just take time – and no amount of TF2 experience can change that.

So, there you have it. TF2 has given me some advantages getting started in Overwatch, particularly with Hanzo, and moving from one to the other feels like a natural move for anybody that enjoys team-based shooters.

But when it comes to mastering the nuances of Blizzard’s heroes, there’s going to be no substitute for practise. It’s very much its own game, and in 400 hours’ time I’m sure I’ll still be learning new tricks.

Have you had a similar experience moving between the two games? Are there any skills you’ve picked up in one that are directly attributable to other? If so, leave a comment below.