Overwatch hero 30, Baptiste, has just joined Blizzard’s quirky rabble of heroes, but what abilities does he have? Oddly enough, our new hero boasts the healing abilities you would come to expect of a medic alongside a hitscan weapon that wouldn’t look out of place in the hands of DPS hero. Despite being a hybrid of both, though, he is mainly considered to be a healer. The meshing of hero roles is something we’ve seen from Blizzard before as Brigette embodies both tank and healer traits as she can top up her allies with healing while also deploying a shield that soaks up some damage for her team.

Baptise’s dual nature also feeds into his back story as Blizzard typically goes to great lengths to ensure each character isn’t a mere face with a gun, but a personality with a set of abilities that suits them. Ana comes across as an ideal healer as she embodies a grandmother aesthetic that makes you believe she’s there to look out for you and prop you up when you need it. Baptiste follows in that tradition as his hybrid personality of a soldier and a healer stem from surviving a childhood spent in the omnic crisis – which leads to his desire to help those affected in Overwatch’s present day.

There’s a lot going on with Baptise, but no need to worry – our Baptiste guide dives into the new hero’s abilities, who he is good against, who he pairs well with, who he doesn’t work well against, and some lore for good measure.

Passive: Exo Boots – hold crouch for a few seconds and a meter will fill-up and give you an extended jump to reach higher places.
Ability One: Regenerative Burst – allows yourself and allies to heal over time for a period of time, even if they leave you.
Ability Two: Immortality Field – Baptiste throws up a destructible canister that emits an area of effect that prevents allies going below 20 health points.
Ultimate: Amplification Matrix – creates a shield that doubles the damage and healing of anything that passes through it.

Baptiste’s tool kit focuses more on his medic duties. His Regenerative Burst gives Baptiste and everyone close to him the ability to heal over time. It’s also the only way Baptiste can heal himself so his opposite healer may need to remain on-hand to help out in a pinch.

Baptiste’s Immortality Field is a huge standout as it will keep his team alive, but it can be countered as the canister that emits the aura can be broken. The ability has a very long cooldown to make up for its strength.

Baptiste also boasts some unique abilities to distinguish himself as a healer. Thanks to his Exo Boots he can jump up to greater heights, which should give him some escapability should be caught out by a flanking Tracer. Baptiste’s Amplification Matrix can buff the damage and healing of any weapon that fires through it, though despite looking like a shield it does not block damage from the other team. 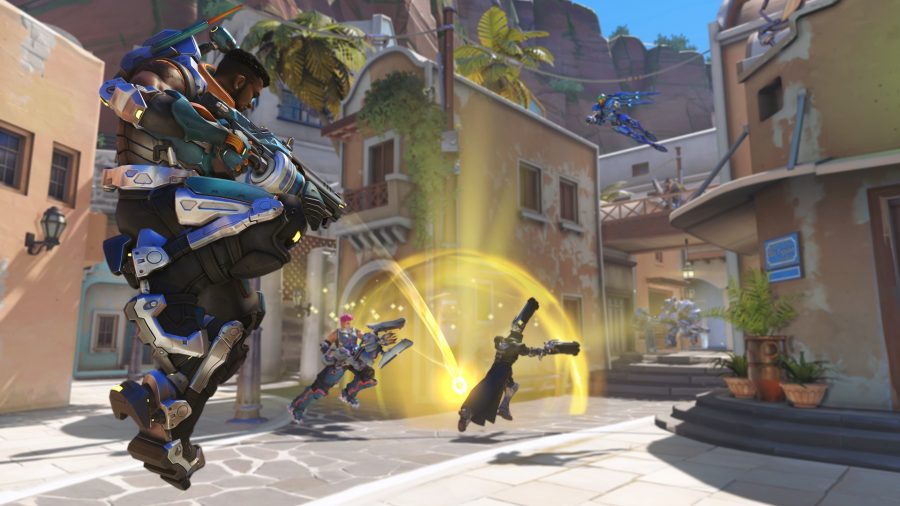 Primary: Medic SMG – a three-round burst weapon that is hitscan.
Secondary: Biotic Grenade – projectile that heals allies but not Baptiste.

Baptiste’s Medic SMG is his only source of damage but it’s easier to land shots with as it’s a hitscan weapon and therefore doesn’t have travel speed or bullet drop. The Biotic Grenade is Baptiste’s main source of healing and fires like a projectile, but it has no effect on himself.

Get your first aid on Baptiste's abilities and playstyle. Now healing on the PTR!

Who is Overwatch Baptiste good against?

As another hitscan character, Baptiste has an edge over other healers when taking on Pharah as it’s much easier to hit her without the need to judge the travel on projectile attacks. Baptiste will also have an easier time in duals with other projectile-based heroes for the same reason.

Baptiste’s Immortality Field will also prove a nuisance to any hero whose ultimate is single damage like DVa’s Dva Bomb and Junkrat’s Rip-Tire as it will stop them from wiping out teams unless it can be destroyed prior. 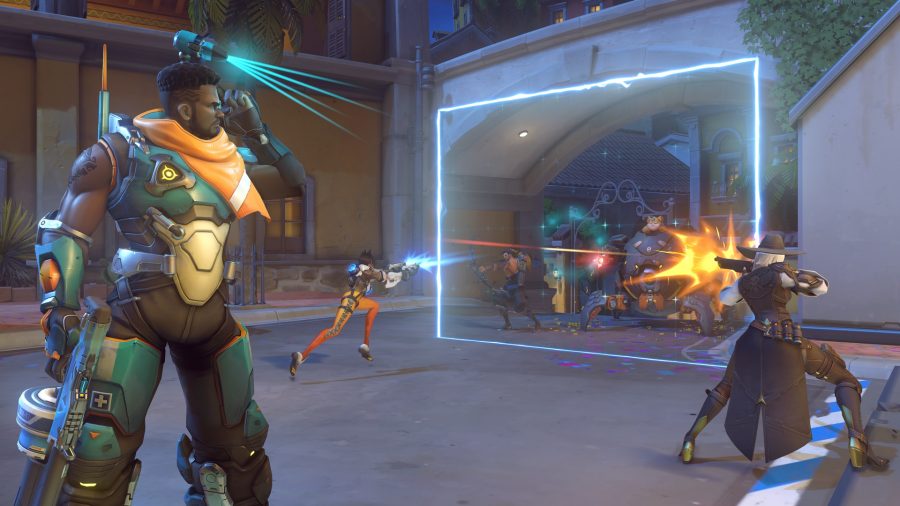 When building a team around Baptiste you’ll mostly want to factor in his Amplification Matrix, who can benefit from it the most, and who won’t lose out due to playing at range and being behind the Matrix. Soldier 76, McCree, Widowmaker, Hanzo, and Ashe will likely benefit the most as they’ll get huge buffs to their damage. Ana players will also enjoy the ultimate ability as it buffs both her healing and damage.

Baptiste is not the fastest hero on the roster though, and as he can only heal himself with his Regenerative Burst ability, you may want to pair Baptiste with a Lucio player who can heal and provide a speed boost for him when trouble is around the corner. 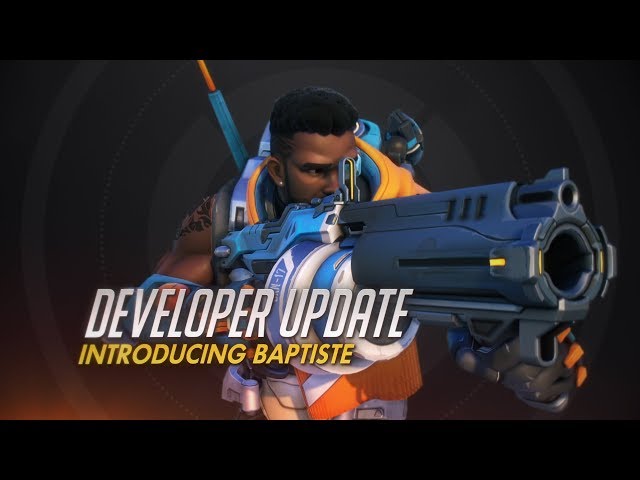 The main thing to look out for when playing Baptiste is his Immortality Field. You’ll want to try and force an enemy Baptiste into using it early so you have the all clear to go after him as it has quite a long cool down before it can be used again. Heroes in his Immortality Field are still affected by abilities, too, so a Roadhog could easily hook one of them out, or use his ultimate ability to destroy the canister or push everyone out. Orisa’s Halt attack can also pull anyone out of the abilities area of effect.

When it comes to his Amplification Matrix, you can counter it with a pinching strategy, or even a “dive comp”. Due to the nature of the Ultimate Ability everyone will need to group up to fire through it so you should find some success if you can attack from multiple angles. 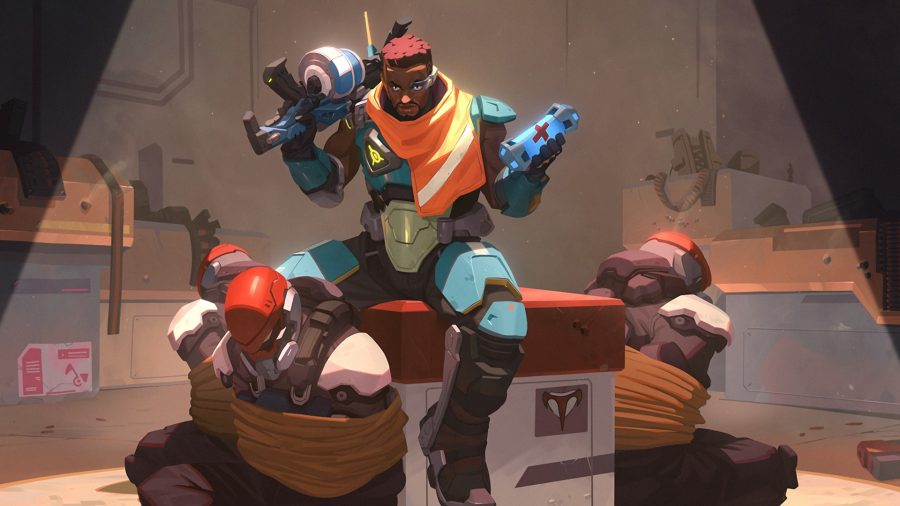 A former combat medic for Caribbean Coalition and Talon Mercenary Unit, Baptiste now devotes his time to helping those affected by war. Because he is one of the 30 million children orphaned by the omnic crisis Baptiste has an innate desire to help people. While he was paid well by Talon – even using the money to set up a medical clinic in his hometown – he soon left the outfit after their missions escalated in brutality and civilians began getting injured.

And there you have it, everything we know about Overwatch’s newest recruit Baptiste and his abilities, weapons, synergies, weaknesses, and lore. Want a run down of every hero Blizzard has released to date, and others who may be coming in the future? Then you’ll be pleased to know we’ve compiled them all in our handy Overwatch new heroes guide. It’s always a wait and see regarding how a new hero will change the meta, but Baptiste looks to be another fun option that’ll give healers an extra punch on the battlefield.