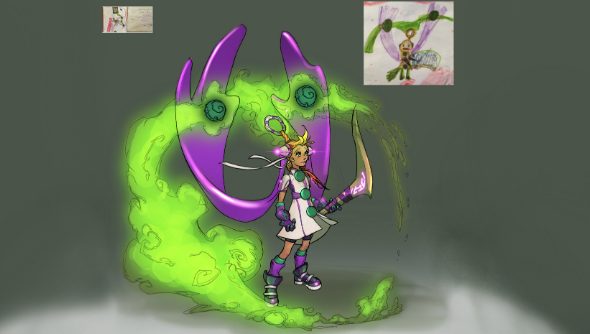 In the early hours of Friday morning, Shane Hickey, parent and humble fan of Blizzard’s upcoming shooter Overwatch, decided to tweet some fan art his daughter drew to the dev team.

Will Overwatch make it into the best FPS games on PC hall of fame on release? Not long now to find out.

Christened “Birst”, Shane’s daughter describes the character (in the adorably broken handwriting of a child learning to spell) as a combination damage-dealer-healer, with a boomer-rang and laser suit-dress hybrid.

Despite being something of a mash-up between existing healer classes Lucio and Mercy, with wings and superior jumping abilities, the Overwatch art team were enamoured with Birst.

We’ll admit, the boomerang is a sweet idea, and the mysterious “heeling box” on her dress also opens a lot of options for unique gameplay abilities, like health grenades, or band-aids.

One of the concept artists at Blizzard was so taken with Birst that they decided to clean up some of young Miss Hickey’s original sketches for a dev-ready character study.

@shanehickey Our artists were so inspired by this that they created their own fan art! Hope your daughter loves it! pic.twitter.com/c1ToeH1MJF

Who wouldn’t play that character? Look at those multiple head-dress things, that is an A-star character right there. Plus, magic rune-infused Boomerang?! The campaign for making Birst the next Overwatch character post-release begins here.