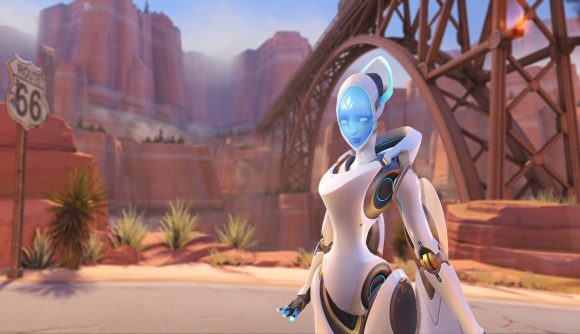 It feels like Echo has been on the way to Overwatch for years now, but the new hero is finally confirmed, finally up on test servers, and now, finally ready to properly launch into the live game. Blizzard has confirmed the final Echo release date, so you can get your countdown started – the new damage hero is less than a week away.

Echo officially joins the Overwatch roster on April 14. The update should include all the 1.47 changes we’ve seen on the PTR over the past several weeks, including the Training Partner in the Practice Range, which lets you test your abilities against specific heroes. Beyond that, it’s a pretty quiet update, though Tracer is getting a minor buff to make her Blink more accurate.

The big addition, of course, is Echo herself. She’s got sticky bombs, she can fly, and she’s got a beam ability that does extra damage against targets that are already hurt. Her ult is wild, too – she can use it to steal the abilities of an enemy hero, and gets ridiculous ult recharge rates for the duration.

Echo is also the last new Overwatch hero until the Overwatch 2 release date.

For more multiplayer games and FPS games, you can follow those links for some excellent ones.