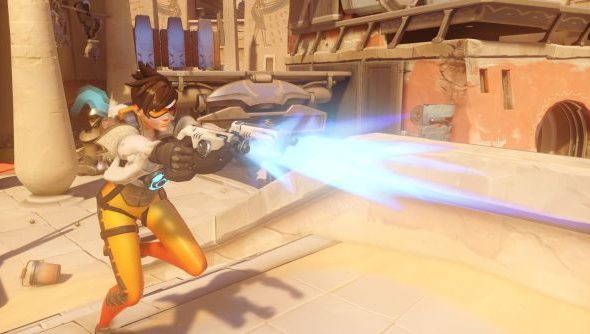 I’m not going to lie: I may have camped and cheesed my way to the top of the leaderboards during the first press sessions with Blizzard’s new team shooter, Overwatch. As I used killer robot Bastion to park myself in a tunnel, morph into a turret, and lay waste to wave after wave of the other team, I started to think I’d already broken the game.

Then I realized that almost every character feels that way. It might be the closest thing I’ve seen to a superhero shooter, and when you’re on a roll, you’re the title character in your own movie.

At first glance, Overwatch is pure, disorienting chaos. I’m trying to defend a control point with my team, firing down a cobblestone street at the first attackers to show their faces. Suddenly Winston, the giant ape, comes sprinting toward our position and pops an red force-field, completely negating our angle of fire while they close the gap. Our team scatters as he plunges into our midst, and his teammates start picking us off as we run.

Then a friendly Widowmaker appears on a rooftop, silhouetted against the night sky, and within seconds she’s gutted the enemy team with a perfect quartet of consecutive headshots. It’s only a six-on-six match, and those four kills completely rob the attackers of their momentum. My support, Symmetra, races back to the point and sets up a turret and teleporter before the next wave. 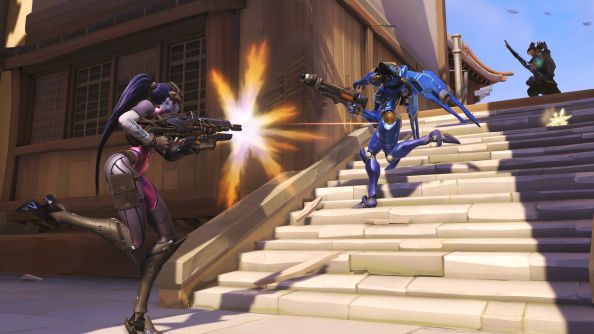 Everything happens so quickly, with so many special abilities and powers popping at once, that it’s as confusing as watching a pro Dota 2 match when you haven’t played the game.

But the characters themselves are easy enough to come to grips with. There’s a special power that takes a while to charge, a personal power that is effectively unlimited after a short cooldown, and then usually something unique to the character. Bastion the robot, for instance, can go from being a regular bipedal deathbot to being a stationary chaingun turret with a fairly narrow field of fire. Tracer can snap back through time and space to an earlier location (and whatever health she had when she was there).

The Team Fortress 2 comparisons are absolutely on the money, especially since the game mode on display at Blizzcon is the brilliant (and notoriously hard-to-balance) Payload mode. But with a gorgeous art style that recalls Bruce Timm’s TV work for DC comics, Overwatch manages to look fresh and exciting.

All the characters I played had the potential to feel amazing and completely overpowered, depending on how I was doing. Symmetra was probably my weakest character, with fairly defensive, team-oriented powers that made her useful to her buddies but weak in a straight fight. But her slow-charging blaster massacred people when it landed hits. But as Bastion, I single-handedly stopped an attacking team that had been steamrolling us simply by finding a hard-to-see firing position that turned the space around the payload into a shooting gallery. It felt cheap and exploitative, until I was on the attack and had the same thing done to my team.

Except I was playing Tracer, and I knew exactly what the enemy Bastion was trying to do. Using Tracer’s warp ability, letting me teleport short distances three times in quick-succession, I escaped the crossfire. Then, another teammate used a special ability that revealed enemies through walls, and showed me where the Bastion was hiding. I ran up behind him, dropped a sticky bomb on him, and then warped back to safety.

That broke the logjam. Now my Tracer stopped being a sneaky assassin and turned into a twitch-shooter star, warping out of the path of bullets and into killing positions behind other players. Again, using my character’s powers felt so good and potent that it just seemed unfair… but I wasn’t completely dominating. It’s just how the characters are designed: when you’re playing well, you feel like you’re getting away with something.

I wouldn’t be surprised if there are some clear imbalances in the game, but at this stage, that’s not important. What is important is that Overwatch has something new to offer the shooter genre, and channels the best parts of Team Fortress 2 while finding an identity all its own.